A Boy and His Blob on Game and Player 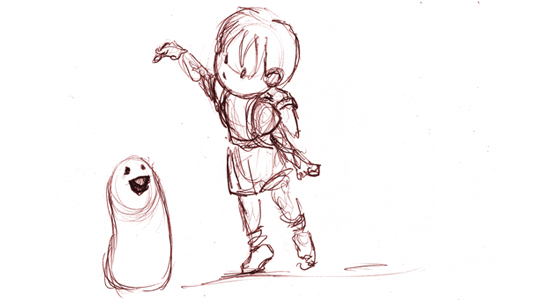 A Boy and His Blob

My blob and me.

y blob is from outer space, and he can change into all sorts of things. My favorites are the parachute and the jack. Mrs. Flanders told me to write about the adventures I had with my blob over the summer. She is a witch.

It all started near my treehouse in the woods. A ship crashed into the ground making a giant hole. Out jumped a white, pear-shaped blob with beady eyes. We became best friends in, like, two seconds. 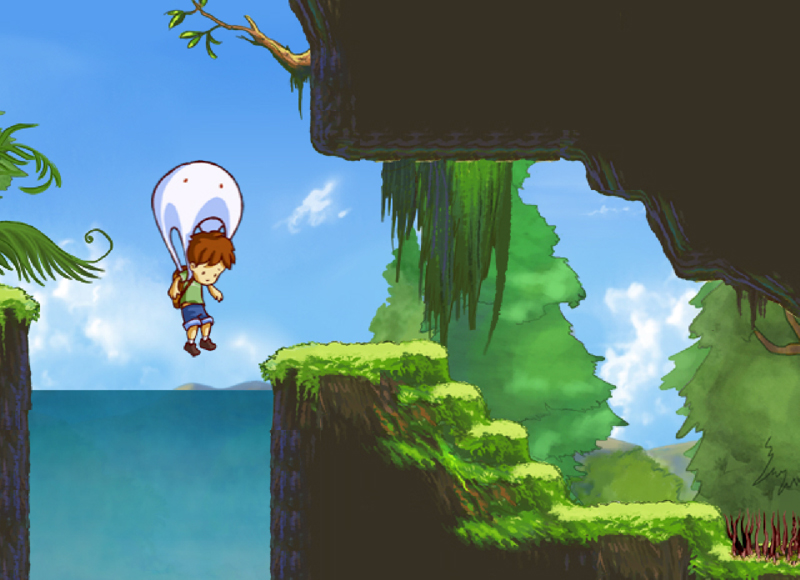 Each flavor of bean turns my blob into something new.

My treehouse has lots of space for the cool things me and my blob find. I have a big jar of jellybeans next to where I sleep, and it fell over once and spilled. That's how I discovered my blob's secret powers. When he eats a tangerine bean, he turns into a trampoline. And each flavor turns him into something new. I want to bring him to class. Everyone will see that my blob really is the coolest. Even he can put a smile on Mrs. Flanders's angry lizard-face.

There are lots of sweet animals out in the forest, like frogs, fireflies, snails, and spooky bats. There's way more than that, and they're all hand-drawn just like me and my blob. But there are mean things in the forest, too. They have yellow eyes with black, slimy bodies, and I died a few times running into them. When that happens, my blob turns grey and sad because his secret powers could have protected me. But our world's awesome checkpoint system brings me back every time. Coming back is cool and all, but when Mrs. Flanders dies, I hope she stays gone. 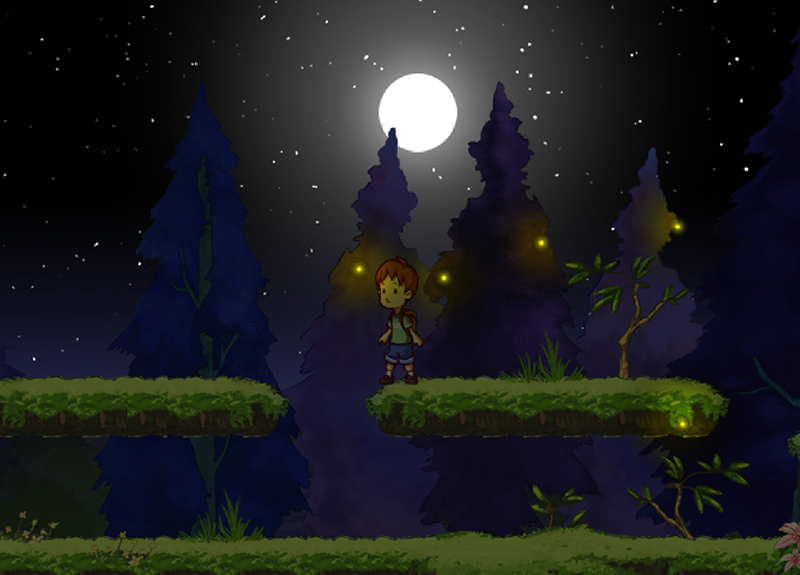 There are sweet animals in the forest. But there are mean things, too.I love traveling around with my blob. I've even been to the city with him. We found dinosaur bones under a subway station, and I took them back home and put them together while my parents were asleep. My blob was bouncing all around, so I told him to calm down by pressing down on the d-pad. He did, so I hugged him by pressing up on the d-pad. Nobody told me I could do that. I figured it out by myself.

Me and my blob really understand each other. I hope he can take me back to his home planet one day. I hear monsters scarier than Mrs. Flanders horned spider babies live there. I'm brave, so I know I can fight them. I want to help all of the blobs just like my blob has helped me.

This narrative reminded me of the time Hobbes wrote Calvin's essay while Calvin was busy wasting time arguing with his past and future selves. Anything that reminds me of Calvin and Hobbes is instantly excellent.

I hadn't thought of Calvin, but you're right!

I love the review, but any idea of how much longevity there is to the game? From what I've seen I'm not sure it has the legs for a full-price Wii game.

The game has three good-size worlds, with each individual level sporting three hidden treasures. When the three treasures from each level have been collected, a bonus level is accessible from the corresponding trophy back in the hub world... or so the boy tells me.

But the short answer is no, the game is not very big. But it is hand-drawn, beautifully animated and charming -- it's the feel good game of the winter. All sensitive types should pick this game up. Also, it should already be budget priced at 40 bones.

And thanks for the comments, guys!

I didn't think a game could be this genuinley adorable.

A Boy and His Blob