Outland on Game and Player 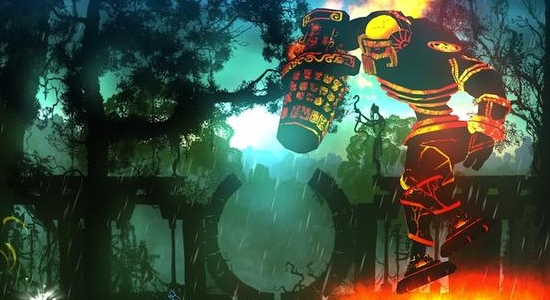 Resoundingly worth your time.

utland is a 2D action/platform game by Housemarque, creators of Super Stardust and Dead Nation. By now, it's a known quantity to Xbox 360 owners but new to the PlayStation 3. Is it worth the money? Resoundingly.

You play as a man plagued by visions of two sisters, one who controls light and one dark, each bent on the destruction of the world. He thinks his visions are some form of madness and seeks a cure from a shaman. The shaman tells him of an ancient battle in the past in which the hero defeated the sisters and imprisoned them, but was killed in the process. Your character is revealed to be the reincarnation of the ancient hero and you must journey into the world to seek answers. Your journeys bring you to the crossroads of the world, which lead into four areas that have been corrupted by the sisters' chaos. You'll need to get past a protector to reach the final area, where you'll find the sisters and free them of their shackles to defeat them once and for all.

The gameplay is very similar to Super Metroid or one of the open-world Castlevania titles. It's a little more linear, though. Each new area you journey to, you will unlock new abilities that aid you in getting further and exploring new areas. Aside from the attack-and-magic style abilities and teleportation, you also gain the ability to switch between light and dark power. After getting these powers you will encounter creatures that can only be killed with the opposing alignment or with a special attack. You also need to use your alignments to get through energy traps that are all over the place.

Each large area is pretty straightforward. You battle your way through four or five maps, find the guardian key, and fight an epic battle with the guardian for that area. The guardian battles are part Shadow of the Colossus and part bullet hell. The difficulty curve is steady throughout the game and the bosses are all pretty challenging given the abilities you have when you fight them.

Scattered in each area are a number of collectables called "Marks of God." These unlock concept art and special upgrades for your character. Snagging all 42 will double your basic melee attack power, which is very helpful for the final battle. There are also various health and mana shrines, which allow you to offer a large amount of money to upgrade. You also unlock an arcade mode chapter for each new larger area you visit and find a co-op room in each area. In arcade mode, you race the clock to overcome the obstacles in the area and defeat the guardian. Co-op mode similarly pits you against the clock to use teamwork and complete various tasks.

The game is very well done with silky-smooth graphics, nice music and sounds, and a good amount of content for a $10 title. If you're not convinced, download the demo.