The Next Big Thing on Game and Player 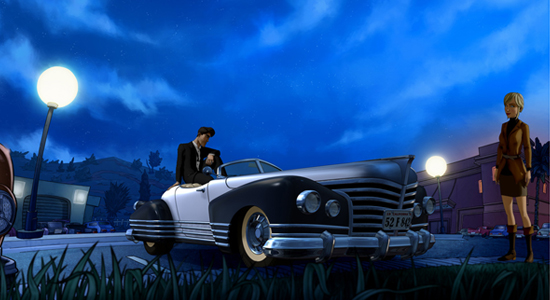 A beautiful adventure game with an old-school feel.

he Next Big Thing is the latest point-and-click adventure game from Pendulo Studios, makers of the hit adventure series Runaway.

TNBT chronicles the misadventures of two young news reporters, Dan Murray and Liz Allaire. The pair is to attend an awards ceremony for horror movies which star actual monsters as the actors. The head honcho of the horror movie industry, Mr. Fitzrandolph (a monster himself), has decided to break away from horror movies and do more family-friendly movies like romances and feel-good movies.

Why? Nobody really knows.

The game centers on a pair of reporters solving a minor mystery, switching control between the two characters throughout the game.

During the awards ceremony one of the actors, Big Albert, breaks into Fitzrandolph's office. Curious as she is, Liz tracks him down just in time for him to make his getaway. He doesn't get far, though, as she later finds his body in the storage room under Fitzrandolph's mansion . . . minus his brain. Something sinister is going on, but before she has a chance to clue Dan in, Liz is captured by the evil Dr. Zellsius and his robotic cronies.

The game centers on Dan and Liz, switching control between the two characters throughout the game. It's split into several chapters, which have an overall goal that is reached by solving a handful of smaller puzzles. Some of the puzzles are pretty clever and had me scratching my head a couple of times. There is only one way to solve each problem, though, so once you've learned the solution that's it. I wish there were multiple ways to complete a task to bring more variety to the game, which would add at least some replayability.

The artwork is great and wouldn't look out of place next to an animated motion picture.Hence, the main problem with most adventure games: Once you've played through it one time, that's pretty much it. There is very little to no replayability unless you really enjoyed the story or want to challenge yourself to a speed-run or something.

I happened to enjoy the story and the characters quite a bit as it turns out. The artwork is great and wouldn't look out of place next to an animated motion picture. The cartoonish style made the characters very memorable and likeable. Plus, the writing was pretty well done. There was more than one occasion that had me laughing out loud.

The only thing I found peculiar about the game was the lip-syncing. I'm not sure what was going on there, but sometimes a character's mouth would move twice and they'd say five or six words.

Not being familiar with Pendulo's earlier works, TNBT has definitely made me curious to check out their library. I would place it right up there with some of the best adventure games. It had a more old-school feel to it, like Broken Sword or Discworld, that I enjoyed.

Point-and-click adventures are making a big comeback lately with everything Telltale Studios has been releasing and Pendulo's The Next Big Thing is right at home alongside them. Here's hoping to more and if you play this one, I hope you enjoy it as much as I did.

It's a shame about the lip sync issues. So many developers, be they producing for PC or consoles, seem to struggle with this animation detail. In the age of plugins and automated processes, I don't get why the problem is so pervasive...

Well, to be completely fair, the development team is Spanish. I did find it odd, however, that there is no Spanish language option. I don't know how their whole development process went or if the game was originally intended to be in English, but I can imagine it was or at least known that it would be translated.