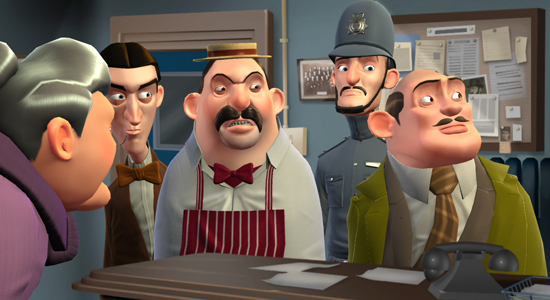 ather than reviewing Blue Toad Murder Files' three new episodes formally, I'll use this space to declare that Relentless Software hasn't changed a thing since last time. The story is still great fun, but the cumbersome interface and roadblock riddles will frustrate those initially put into a jolly good mood. However, I believe in this developer, and if it wants to bring this franchise out of the shadow of its former glory Buzz then the following gaps will have to be filled.

Misdirection: Using voice actor Tom Dussek for every character in the game is a sweet gimmick, but get at least a couple folks to write and edit the rules that proceed each puzzle. I wouldn't think to publish directions on how to operate so much as a microwave without another pair of eyes to look it over. But in Blue Toad even a Minesweeper clone is made convoluted by sloppy instruction. And that goes for the interface issues as well. Sometimes it feels as though the developers are weaving puzzles from the back to the front and not thinking about how the user will naturally approach them.

Take a Hint: No hint system . . . really? I'm all for Hard Mode in games, but at least provide a self-regulating hint option instead of bringing the game to a sleepy halt while players are left hating themselves and hating you far more. In an anagram puzzle where the player is to drag nonsense phrases from a list and attach them to very specific pieces of furniture, I was relegated to my own trial-and-error mode for the last three answers. When I finally tripped on the solution, the game didn't even reorganize the letters so that I could at least have that "Aha" moment. I'm not as smart as you, alright? I'm getting over it. Play more Professor Layton for prime examples of a proper hint-system and post-puzzle wrap-ups.

No Thanks, I'm Good: This game is billed as a potential multiplayer experience, but twice my girlfriend fell asleep late into the game and it couldn't have mattered less. Even the town's witnesses treat the multiple player characters as one persona. Is this a co-op game? Are we supposed to be taunting each other? And why is Mario Party beginning to look really awesome right about now?

Less Math: I'm a natural at adding numbers in my head while subtracting beers from the fridge, but I'm the only one.

As it stands, Blue Toad Murder Files is a game for very few. And even those that can look past the stubborn issues will undeniably admit that it can be so much more. Luckily the groundwork is there. The game looks and sounds fantastic — it's just not very fun to play, that's all.