Syndicate on Game and Player 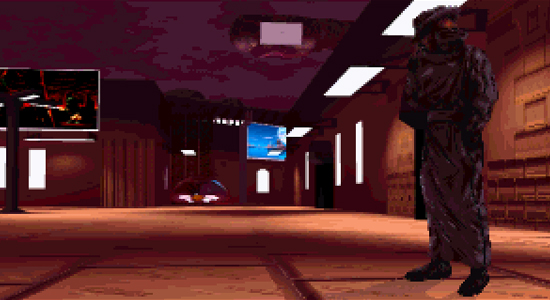 lade Runner is the kind of movie you could live in; a genuine world audiences only glimpse for two hours. A wonder, then, more video games haven't borrowed from the Scott-Mead-Giraud-Gibson chimerical future of cyberpunk. I played three so-inspired titles in quick succession during the early 1990s: Rise of the Dragon, BloodNet and Syndicate. The first was richly illustrated but mediocre, the second dense and idiosyncratic. Bullfrog Productions' Syndicate earned itself an inferior sequel, and like poorly aging contemporaries is problematic to run on an emulator, but revisited still entertains as a tactical game — carrying the dry, mordant appeal of its cinematic begetter.

Syndicate's society has declined canonically enough. Oligopolies bought statehouses; then kingpins took the C-suites; and when a computer chip invented to assuage despair over the corrupt, polluted planet found use as a mind-control device, mega-corporations marshaled squads of cyborg agents to consolidate — and expand — their influence.

Kit out the lads: properly outfitting a four-cyborg squad wins the game.

Players take control of an ascendant power in Western Europe, working east to rule every territory across the globe. Missions, one per territory, may be selected from a political map of the Earth indicating the brand of occupation and, if owned by the player's syndicate, corresponding tax rates and public sentiments. Briefings outline situation reports and orders for agents that range from abduction to assassination. Here Bullfrog earns its accolades: although rather to the point, these authorless, first-person-plural memoranda are so cleverly written that the option to purchase additional reconnaissance reports (and smug, hard-nosed narrative) is worth the real time and play money.

Properly outfitting a four-cyborg squad is cardinal to completing missions and winning the game. Agents can be equipped with weapons, scanners, security passes, medical supplies, and a tool known appropriately as the Persuadertron. Body modifications grant cyborgs greater speed, resilience, aim and combat sufficiency. Advanced equipment and implants may be researched as funds allow, offering an incentive to plunder a conquest for the now and worry about revolts with a few more territories under the belt.

However, between large numbers of enemy agents and the sluggish response of individual control, the easiest — perhaps the only sensible — recourse is to select all agents, push IPA to the hilt and let them shoot it out. Gathering an armed mob of civilian passerby with the Persuadertron, slipping past a garrison in a commandeered police cruiser or ambulance, and setting the odd explosive with decisive results are all guilty pleasures, but practical concerns and overwhelming frontal assaults will, for the completist, trump. Fun, yes, though perhaps not as fun.

I couldn't see myself spending the hours and days advancing darkly forward to global domination, taking breaks to mend my conscience — possibly because I already did, during the hot midsummer of 1994. What a time it was. As a candidate for an arcade title on Xbox Live, PSN, or Steam; or as a refurbished intellectual property for today's players seeking cloak-and-dagger dystopia; there is still Syndicate.

Syndicate and Syndicate Wars are two PC games I'm sad to have missed out on. I think I have the same reservations about going back to them as you do with XCOM, Mike.

Yeah — unless you happen to discover flawless emulation, the mission interface will probably drive you up a wall. Here is an example, to tip my hat to Nathan, where nostalgia exculpates a game's worst defects or artifacts.