Watchin' the Ships That Go Sailin' on Game and Player 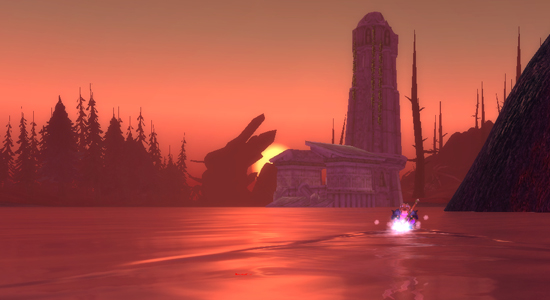 Is World of Warcraft subject to the rule for all good things?

hat is going on in the minds of those inside Blizzard Entertainment? That is not invective, simply a question. With World of Warcraft's third expansion, Cataclysm approaching the fourth month of a life-cycle that should be, by precedent, two years, the obliteration of first-month sales records is matched by player — customer — sentiment evenly distributed between ennui and indignation. The first is data, and the second is anecdote, though anecdotal inasmuch as it's expressed by many of those in the game community around us.

The obvious dovetail binds novelty and human nature. Cataclysm launched, the rush through a new world has ended, the mysteries of classes at a new maximum level have been exhausted through discovery — at some point before the next release of content it all becomes quotidian. Feature films could only hope for this longevity. But criticism of the game is specific and systematic, and in lieu of satisfaction, players vocalize an alternative: the March 1st entrance to the MMO market of Rift.

Here is a kind of Goldilocks dilemma. Gameplay in the expansion prior, Wrath of the Lich King, was both celebrated and derided for being easy — or at least easier than World of Warcraft was theretofore. Character classes had evolved since 2004 from discrete, disparate, and — in some cases — hopelessly impractical, to relative similarity that, again, some feared meant interchangeability. One class role in particular, healing, was structured so that plentiful resources necessitated constant, intense damage from monsters and lightning-quick response times from players.

Here is a kind of Goldilocks dilemma. Blizzard appears to have responded to complaints of the last expansion's ease sincerely.Blizzard, famously accused of deafness by demanding players, appears to have responded to complaints over challenge and difficulty sincerely, with especial care for the world-class vantage. Progression through Cataclysm's endgame, including normal and heroic versions of 5-man dungeon and 10/25-man raid encounters, requires considerably greater time, effort, and talent. Joining pickup groups, especially those for daily 5-man runs formed through the automated matchmaking feature, entails a lot of risk; principally that of being teamed with unprepared players. Guilds that conquered Wrath's first raid instance within a month now slog forward with 75 percent completion.

Not to be overlooked, however, is the fact that basic progression in the game's first expansion, The Burning Crusade, was barricaded by many time-sinks — to say nothing of the esoteric globe-trotting to prepare for the exclusive 40-man odysseys of the original game.

Along the same lines, a common frustration these days is group composition when encounter design generally rewards ranged classes and inconveniences melee classes at best — punishing or even dooming raid groups without sufficient casters for long-range attacks or monster crowd-control. But this is merely atavism: in The Burning Crusade, composition meant the difference between setting foot in even a 5-man dungeon or not. Before that, certain classes simply could not perform adequately as tanks, healers or damage-dealers. Are players in casual guilds more likely to be declared extraneous by way of supply and demand? Probably, and although changing characters involves equal parts labor and quieting of sentimentality, Cataclysm offers players every means to expedite the leveling process.

That the game has become so enormous, whereas Blizzard prefers small, focused development teams to gigantic production houses, means Rift contests World of Warcraft in its senescence. The amount of the game world that hasn't changed since launch is not trivial, and as one colleague — who enjoyed Rift's beta events — put it, "something that resembles a modern game is refreshing after six years of porn-'stached humans and ugly night elves." I've pondered it myself: in a world whose graphics have resisted aging only under the auspices of being cartoonish, why am I still engaged? One thing: gameplay. That is exactly what has been put on trial, so by year's end we should be able to judge Blizzard's actions, if we can't quite read its developers' minds.