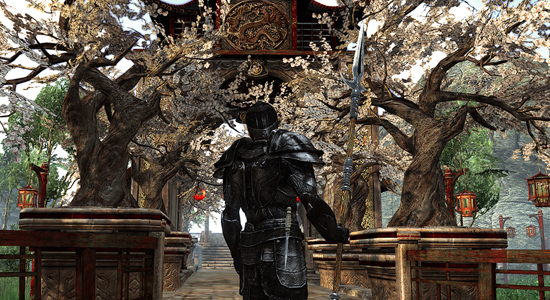 One of the better attractions this year.

ou might think that a pair of staple fantasy roleplaying games from a minor developer and a party of smaller publishers should earn modest sales and unremarkable press. They do, but for the Two Worlds series. Quietly released in Europe in May 2007, Two Worlds roused an industry counting the days before Halo 3 when it hit North American retail three months later. Reviewers weren't content to pan the game for its shoestring production and vaporware multiplayer; taking Two Worlds' unrepresentatively chirpy advertising as an affront, they crucified it. But everyone learned who SouthPeak Games was.

A sequel went into development by TopWare Interactive. Now, the company originally owning TopWare dissolved and was purchased by Zuxxez Entertainment in 2001, and one office resulting from a split, Reality Pump, is credited with development of the original. Reformed as a subsidiary by Zuxxez in 2005, TopWare assumed production of Two Worlds II for multi-regional publication by SouthPeak. Last September, SouthPeak balked at TopWare's scheduled release date, and following a brittle public exchange, SouthPeak sold UK rights to TopWare and prepared for a January release. Have you got all that?

It's a wonder they don't try reality TV instead. The reception of Two Worlds II has been overshadowed by the title's notoriety, which is a shame, because for a typical entry in the genre, this game will be one of the better attractions this year before the fall bonanza.

Vast landscapes are speckled with characters, monsters, and dungeons just asking to be braved.

Players take the role of the nameless hero, brother of the woman whose latent, fiery divinity is the target of a sorcerer. Held captive, the two vow to resist and defeat their enemy; when the brother escapes, he makes a promise to return and rescue his sister.

The brother's new allies are orcs — stereotypical villains but in this case a sardonic, maverick bunch. From the first moments of dialog, aided by the protagonist — a temperamental cross between Clint Eastwood and Charles Bronson — Two Worlds II distinguishes itself from The Elder Scrolls' dizzying arcana and Dragon Age's young-adult dalliances and stilted perorations. There is enough seriousness to bind the plot and game world together; the rest is lively tongue-in-cheek, and aside from a few stinkers, most actors sound well-placed behind a microphone.

After a slow expositive tutorial and a brief period of fecklessness due to level and gear limitations, the game's big world lies wide open. Antaloor, perhaps deserving an anagrammatic reshuffle, will and should draw comparisons between sandbox lodestars like Oblivion. Vast landscapes across several different climes are speckled with characters; monsters and villains; and well-situated doorways to dungeons, caves and tombs just asking to be braved.

There is enough seriousness to bind the plot and game-world together; the rest is lively tongue-in-cheek.The same lines were drawn between Bethesda's work and the original, too, if derisively. While, even five years later, TopWare can't quite approach the luster or enchantment of Cyrodiil, environments meet the standard of a contemporary, lower-budget production; the terrain, flora and fauna do look nice. Intriguingly, following the Old World sensibilities of Reality Pump, TopWare has a better sense of the medieval than BioWare — with its shallow, stage set-piece environments — or Bethesda — with its Iron Age mini-malls — ever has. Settlements rise from the ground, haphazard as they should, huts and houses cluttered and winding between natural facades of hills and cliffs; merchants bark and trade from stalls; and people mill or bustle in convincing patterns. Antaloor feels ancient.

In spite of a traditional fighter-rogue-wizard trio defining character development, players are free to improve abilities and skills without confinement to any class, and easily switch between up to three armaments. Alchemy returns as an ever-present production talent; and a variation of Reality Pump's unique — if inscrutable — method to improve existing weapons and armor returns in the form of reducing items to constituent parts for a reforging-like process. Much of the gameplay is derivative, but competently designed; and fulfilling to a player in search of it.

We practically take for granted that the next frontier of roleplaying fantasy is reserved for Bethesda's The Elder Scrolls V: Skyrim — since it likely will be, but that's for November, maybe, if execution matches intent; and in the interest of reconciling the perfect and the pretty good, for the time between now and then, there is Two Worlds II.