The Magic Obelisk on Game and Player 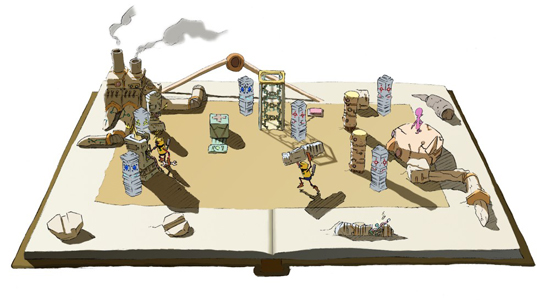 Who is this game for?

iiWare has been good to me as of late. In one fell swoop a new 2D Castlevania is available alongside the real surprise, a 500-point puzzle/platformer from storied developer Game Arts. With Sega Saturn titles such as Lunar and Grandia under its belt, this Japanese developer is welcome to drop by any time with its latest offering. But what they baked and brought over this time initially had me straining a smile.

The more I say it out loud, the more it rolls off the tongue: Magic Obelisk. But nothing rolls more than my eyes do at some of the character art in this game. Yikes! Who is this game for? The main character, which is indirectly controlled, could not look more awkward and generic with his noodle limbs and sculpted, yellow hair. But the blue butterfly/cotton-candy alien, with whom the player uncomfortably navigates the small 3D environments, is the real evil.

It's the magic halo made of more blue butterflies it uses to activate puzzle elements that will cause players' eyes to hunt off-screen for holy relics.

But seriously, who is this game for? Because it gets wicked frustrating starting in the teen levels. The unfortunate-looking boy must traverse only in shadow to make it to each level's exit. But each level is smothered in sunshine, so when the player-controlled butterfly spins the titular obelisks around it creates lanes of shadow for the boy to walk his AI path along. But purple ghosts are strewn about the level and the boy, if not constantly micromanaged, will meander into their paths causing a checkpoint restart reality check. He would not stand still, no matter how much both me and the blue butterfly/cotton-candy alien cursed at him to do so.

And with an obtrusive story that I swore I wouldn't get into — l think chlorophyll-powered Teletubbies — the game is left occasionally satisfying with the few puzzles that work and cool robots that would probably be more comfortable in a better game . . . like Castlevania: The Adventure ReBirth, which also provoked plenty of curse words, and a near-stroke to boot. Stay tuned to Game and Player for the doctor's note I achieved playing that one.

While viewing the game's hand-drawn art that's posted here, I began lamenting my harsh comments on the in-game visuals. But that's just it! The in-game visuals are a far cry from the fantastical art that is displayed around the game. If only they were more closely related.

Do you think that's a problematic limitation of the Wii, Alex?

No, I don't. Not at all. Look at A Boy and His Blob, or, for a 3D example, Wind Waker. I think it's purely the difference in talent between the original concept artist and the 3D modeler.

It would have made a world of difference if the game had a more brush-stroke look to it that helped to make shadows dominant, rather than them being lost in primary colors that lack depth.

But the game's score is mostly due to the frustrating gameplay that could have been avoided with more thoughtful design. Hell, I would have easily paid an additional 500 Wii points to have a less frustrating experience, along with the boy being made more aesthetically pleasing as an anthropomorphic shrub.