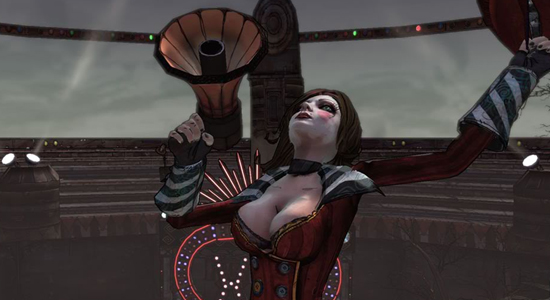 Come get your violence on.

ad Moxxi's Underdome Riot is the second DLC for Borderlands and features a new game type called "Riot Mode" wherein wave after wave of familiar, angry faces try to kill you and your friends.

The host of this bizarre event is Mad Moxxi, a sultry hedonist in search for her fourth husband. Previous owners of that title consist of one unnamed man, Steve the Bandit (of "Heyooo!" fame), and Marcus Kincaid. When she isn't on the prowl she seems to takes consolation in running the show as host, referee and commentator for all of the Underdome's activities.

This particular DLC, unlike the Zombie Island of Dr. Ned, is not an expansion to the story but a grab bag of extras that any Borderlands fanatic should not go without. Packaged neatly within this new game type are two ability points to be earned and a bank to store all of those weapons you've (I've) been hoarding.

And let's not forget all the fun you'll be having as you fight through five rounds with five waves of enemies each. Then there's the larger challenge which lasts 20 rounds with five waves each. That's 100 waves of skags, psychos, and nearly impermeable Crimson Lance fellows. Such an undertaking needs planning, snacks, and a possibly several uninterrupted hours of gaming time.

The only real downside to this game is that you get the feeling you won't really want to revisit it later. Each round consists of the same pattern of waves: the starter wave, the horde wave, the gun wave, and finally the boss wave. After surviving five rounds in each of the three arenas, the idea of doing the same thing over again for 20 rounds makes my stomach turn.

The idea of facing 20 rounds of wave after wave in three arenas makes my stomach turn.Gearbox really did a great job, as usual. It is very entertaining, it fits well within the world of Pandora, and it is incredibly fun to attempt with friends. They have provided us with a bank to store our incredibly valuable loot, which is definitely useful but more than likely not worth $10 alone. Plus the repetitive nature of this Smash TV-style game type may turn off those who are hoping for a bit more in the way of story. It is essentially the introduction of a new character with whom you have no contact, but she does color the event with her whimsical attitude and sardonic commentary.

In this new age where DLC is becoming more common, story-based content will always hold more weight because it seems more cost effective. But content like Mad Moxxi — which still costs the same as Zombie Island — may never be able to compete for the same level of interest due to the limits created by making it so repetitively linear and adding very little plot development. I can only hope that Gearbox finds a better balance in future DLC ventures, which I can only assume will follow the developer's pattern of combining very popular game features into something interesting and fun.

Mildly disappointing and ironic, given that a trailer for Moxxi finally convinced me to purchase the original game. I suppose Gearbox underestimated the power of a buxom homage to Auntie Entity. But doubtlessly there'll be more, and better.

This only sounds worth it if you have four buddies, I hear all those 'hordes' of enemies become an absolute grind with smaller groups and impossible for solo players.

Also, I hear you don't earn exp or weapon proficiency while taking part which is just dumb.

It is short-lived fun with very little to keep it going. Clearly a lot of work was put into creating it, but it just doesn't compare to the first DLC.

Chris and I agree that the original horde mode in Gears is still our favorite to this day.

The art style for this pack is fantastic. It's unlike anything out there. I dread the day of Borderlands copycats.

Thanks for the review, Jessica. I was thinking about grabbing the two content downloads for this game, but I may start with the original one first until I get some high level characters. This could be fun too, even if short lived, I always had fun with Smash TV. :)

Totally agree with you Jessica. I did one 20 round 5 waves with 3 friends and it took us 4 hours.

I think if anyone really enjoys Borderlands, to the point where you might have multiple high level characters, then it would probably be a worthy endeavor.

I would love to tackle these 20 round challenges at some point, but like I said, I will need snacks. Lots and lots of snacks!

If you want I can help you out sometime this weekend. I have a friend that needs two more and I need to do Hell-burbia one more time with my level 16 Hunter.