Skullmonkeys on Game and Player 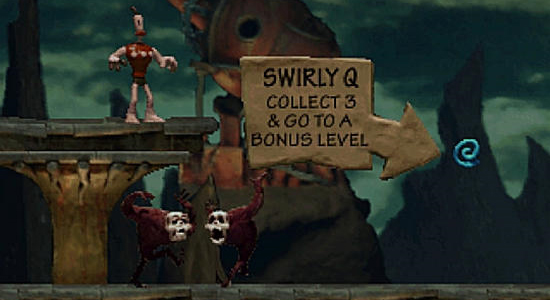 Scour eBay for the game discs, and play this sucker!

ooking back there is only a handful of games that I can say I truly loved. One such game is Skullmonkeys, a console sequel to The Neverhood for PC. When I think back to some of my most cherished memories, Skullmonkeys quickly rises to the top.

Sure, it's nothing special in the way of platformers, albeit very challenging at times, but that wasn't what made this game sparkle. The absolute necessity for a funny gag in every possible cut scene and crevasse is a feat worthy of honoring in my book.

From floating hamster shields to universe enemas (yes, you read that correctly) this game is an amalgam of the weirdest things you could possibly think of. And that is why I love it!

The story begins on planet Idznak, home to the dim-witted Skullmonkeys, where the nefarious Klogg has decided to stake his claim. After appropriating a skull for himself, he quickly declares "Look, Ma! I'm Klogg Monkey, the king of all Skullmonkeys!" Thanks to the quick actions of Jerry-O, the only smart Skullmonkey, our hero Klaymen is contacted to come save the planet from the clutches of Klogg Monkey.

As Klaymen, the goal is travel through various levels that represent the flora and fauna of planet Idznak. Each level is introduced with a claymation cut scene to help the story along and also introduce Klaymen's abilities. Such abilities include his unique talent for farting out clones of himself, summoning his cousin Willie to capture all items on the screen, and — my favorite— the universe enema that destroys all enemy on the screen.

The levels themselves are superbly designed and full of the creative genius that spawned the original game, The Neverhood. Just the names alone are enticing enough to make me wish I was playing instead of writing. Just mentioning "The Elevated Structure of Terror," "The Incredible Drivy Runn," or "The 1970s" should be enough to cause you to fly off your seat right now, scour eBay for the game discs, and play that sucker!

It also bears mentioning that the soundtrack is absolutely amazing and deserves your perusal if you are a fan of music by the likes of Terry Scott Taylor or Jonathan Coulton. It's got spunk, which I think is hard to come by in video game music. For the most part some soundtracks seem to be rather ho-hum, meant to be background to what your real focus is. In Skullmonkeys, I am quite glad to say that the music itself is just as important as any other aspect.

I especially admire the manner in which the music is gradually revealed through each sub-level. When you first begin a level, you are running along to a simple instrumental version of the full song that awaits you in the very last section. By then, you can't help but stop and listen to the words in hopes of deciphering their meaning. Sometimes they are coherent, sometimes they are mere jibber-jabber, but it makes for an incredible experience that wouldn't be the same without.