Deathspank on Game and Player 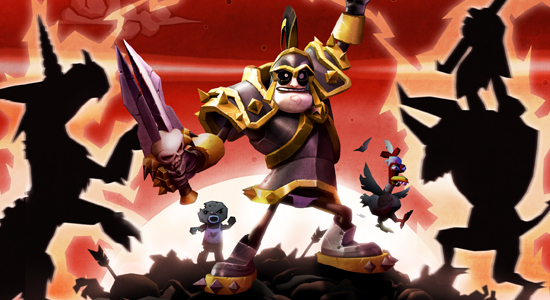 For the young at heart.

s hobbyists, we tend to analyze game titles in terms of advertisements, trailers, and articles prior to release day. We look for a way to determine what it is about based on the one to a few words that are meant to capture all that is contained within that bundle of code. Most of the time it is clear; however there will always be games that make no sense whatsoever. One such game is Deathspank, an Xbox Live Arcade title that I had the opportunity to play cooperatively with Chris, my partner in crime.

Perhaps you are familiar with the story — boy goes to mysterious psychic, psychic tells boy he is destined to be a hero and will someday wield a magic artifact, boy trains his entire life to become said hero, boy spends adult life being a hero and stuff. Such is the beginning of the alleged "true story" of the hero called Deathspank. Yes, that's his name. No, there is no explanation. Did I mention he wears a purple thong?

As hero to the downtrodden, there is no land too far, no mountain too tall, and no animal too cute for Deathspank to travel across, 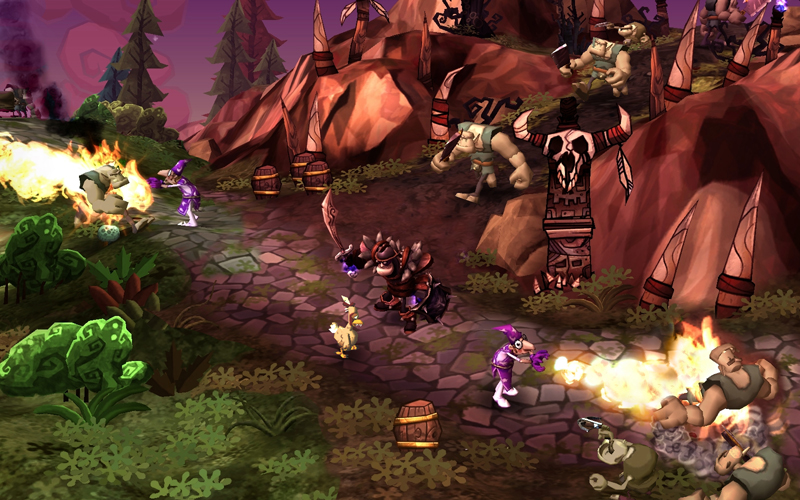 There is no animal too cute for Deathspank to pummel into mush (not even unicorns!)

climb over or pummel into mush (not even unicorns!). Nay, Deathspank is a true hero to the core and thus he will take on any quest, as long as it somehow leads him to the mysterious artifact. Need ingredients for stone soup? No problem. Can't seem to find the recipe for Sabertooth Donkey? Piece of cake! You want Demon Poop to fertilize your fruit crops?! Sure, but that one is going to cost you.

Over a couple of evenings playing Deathspank together, Chris and I completed over 120 quests. The quest themselves are quite varied and definitely . . . unique, as you can see above. But if you are not one for this or any shade of potty humor (our hero teleports via an outhouse/subway/teleportation system), you may want to steer clear. Naturally I was quite amused, but I have a rather high tolerance for ridiculousness in any mode of entertainment. Needless to say, we were kept chuckling most of the time we quested.

I have heard some compare this game to the likes of Diablo, which is fair. It tries very hard, almost too hard since many elements that initially sounded nifty began to feel useless. Monsters and bosses never reach a level higher than 20, but our characters never quite reached this limit. 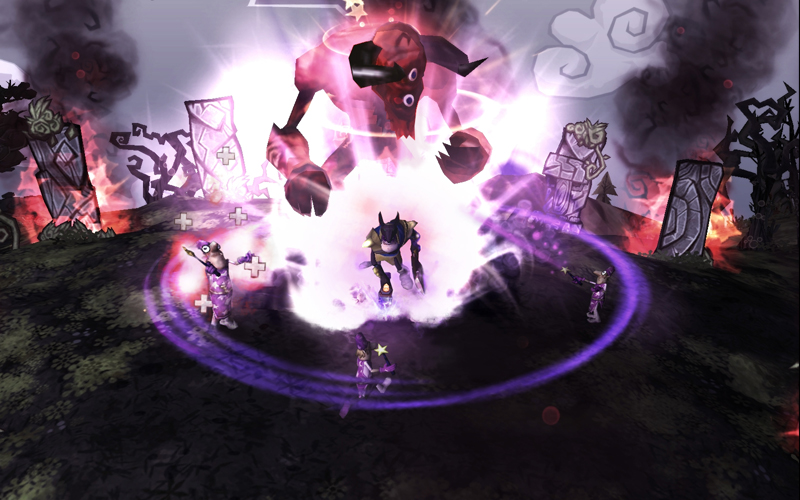 Only good problems: you might get tired from constantly upgrading Deathspank's armor and weapons every five minutes.Leveling is quite rapid — as long as you can remember what quests need to be turned in, thanks to a lousy and uninformative quest log — which would be fine if armor and weapons weren't constantly dropping from even the most common of enemies. It literally erased any need for more than a few thousand gold in our pockets, and that could easily be accumulated in a matter of minutes. At the very end we had over 1.5 million gold and nothing to buy!

A very clever hint system was integrated into the quest log where Deathspank could collect fortune cookies as he explored more terrain. These cookies corresponded to a pre-determined number of hints available for each quest. This was brilliant — except for the times when we used these hints to remember where the quests needed to be turned in. There was absolutely no means of zooming into an area of a map to look for even just names of places you have been to jog your memory. All this really does is cause your OCD partner (i.e., me) to get increasingly frustrated.

With so many weapons and items, such a terrible quest log, and even surprisingly pointless weapon combos, this game is still loads of fun. Nothing that we could complain about actually ruins the fun of this game (I just get tired from constantly upgrading Deathspank's armor and weapons every five minutes). There is enough comedy provided by an excellent and entertaining story arc combined with insanely talented voice actors to keep even the most easily distracted person busy for hours. Is this game worth the MS points? I heartily believe so, and Chris agrees too. This game is the perfect solo or co-op experience for the young at heart.

Yeah, I've only bought 2 weapons so far and I'm at least halfway through the game I think. The auto-equip best armor option in the inventory menu is a great time saver cause then you don't have to bother equipping new helms, armor, gloves, boots, and possibly necklaces.
I agree that it's weak when viewed solely as a Diablo clone. The fun of the game comes from the humor.