Puzzle Agent on Game and Player 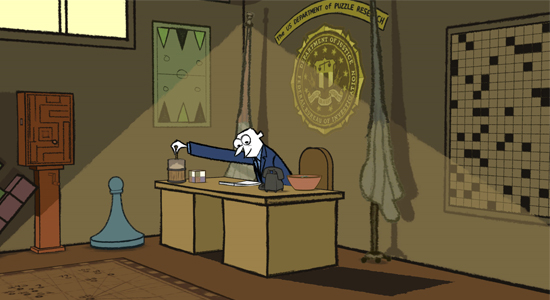 s a fan of story-driven puzzle games, I was absolutely thrilled to learn that Telltale was delving into new territory with an introductory episode of Nelson Tethers: Puzzle Agent. Just thinking about a new series from Telltale sincerely warmed the cockles of my heart, and knowing that this would be the first of many new ideas from them as part of their pilot program was even more exciting news.

After reading up on Grickle and drooling all over a demo of the game at this year's Electronic Entertainment Expo, the day finally came to download the pilot episode. Like Telltale's other episodic content, I was able to pass this single chapter in a day.

Mystery incoming: I was both curious and concerned about what kind of cliffhanger I was heading towards.

During my experience I was sometimes distracted because I was both curious and concerned about what kind of cliffhanger I was heading towards. Would the end make sense should this first attempt fail? Would it make sense if it succeeded? And the answer is — yes.

The story of Puzzle Agent is quite thrilling, as most good mysteries tend to be. Upon receiving his assignment, Agent Tethers makes his way to the snow-covered town of Scoggins where he has been sent to investigate a halt in production at the eraser factory. Without having much of a clue as to the details that caused the factory to stop making the White House's much-needed erasers, it is up to Tethers to talk to all the creepy people of Scoggins and get the factory in working order.

As you may have assumed, this game is about solving puzzles. Both big and small, they come at you in the strangest of places. Unlike their recent series, Telltale has taken us back to the 2D realm where a simple click or two does a lot in the way of getting around.

At times, I felt the instructions were more perplexing than the actual puzzle they described.From stockpiling ABC gum (for those not in the know, that's already been chewed) to deciphering riddles muttered by blubbering weirdos, you'll begin to wonder if this eraser shortage is the worst of your concerns.

Several puzzles in, I noticed that while I desperately wanted to know what happened in this supremely eerie town, I found the puzzles themselves left me with something to be desired. For the most part the puzzles are challenging and require different modes of thinking; however, there were a couple of instances where I felt the instructions were more perplexing than the actual puzzle they described. Overall I would give the difficulty of this game a middle-ranged score — not too hard, but not always easy.

The game isn't that intricate or scary (yet), but it definitely has the soul of a really great puzzle game waiting to be let out. I think this series definitely deserves to be expanded, but my main concern would be whether Telltale gives it the attention it deserves in designing the puzzles (and instructions) to let it shine the way many classics have in the past.

It is both charming and creepy. I want more!

The art style reminds me of half a dozen 1970s-1980s newspaper political cartoonists. Very nice.

I hear Puzzle Agent is a little more expensive that a usual Telltale episode which to me sounds a little bit backwards for a non-licensed original IP.