Bloodstream Raiders on Game and Player 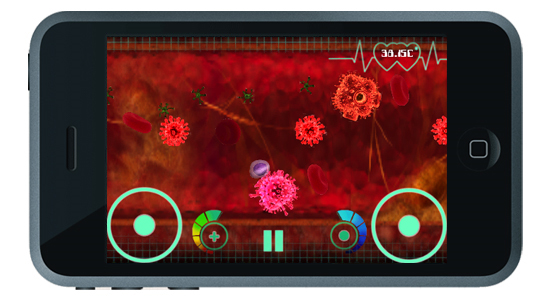 ave you ever wondered what the life of a lonely white blood cell is like, battling disease and fighting off infection day in and day out? Well, wonder no more, as Assyria Game Studio has taken this concept and turned it into the iPhone game Bloodstream Raiders.

This side-scroller plays out rather simply. By destroying incoming waves of antigens that appear on screen, you lower the body's overall temperature. There are a small number of power-ups that will allow you to destroy all microorganisms on screen at once, or slow down the incoming waves for a brief moment. Once you've cleansed that section of the body you move on to another system, fighting to maintain a stable temperature along the way.

As with many of the iPhone games and applications, anyone with large hands will have a decent amount of trouble with the controls (which, in this case, are two simulated touch screen joysticks). And while there is some variability between incoming waves, there's not enough to keep players guessing on what's coming next.

Visually, the game looks pretty good, as both the menus and various body systems are styled nicely for a mobile device. Furthermore, the game features AGON online, a robust social networking tool that allows for friend's lists, awards and high score tracking, among other things.

While the gameplay itself may not be as captivating or addictive as other games available for the iPhone, the concept was surprisingly interesting once understood, and with a little more variety, could be quite fun.