Dante's Inferno on Game and Player 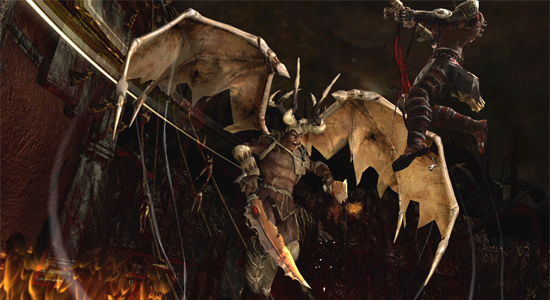 he media blitz surrounding Dante's Inferno prior to its release had done little to spark my interest in the game. The controversial marketing campaigns, one involving indulging one's sins, did nothing to further my understanding of the game, and instead were received as unsubstantiated hype for a game that was likely going to under deliver. It wasn't until I actually got my hands on the game at PAX East this year that I become curious about what more Dante's Inferno had to offer, and finally this past week I had the opportunity to fully explore the circles of Hell.

Was this in the Divine Comedy? Somehow I think not.

Dante's Inferno loosely follows Alighieri's depiction of Hell within the Divine Comedy. Battling as Dante, players must journey through each of the nine circles of Hell, absolving and punishing the souls of the damned along the way, all in an effort to rescue Beatrice - Dante's murdered lover. The story, while linear, is fleshed out through a series of flashbacks which reveal that Dante is not only on a mission to save Beatrice, but to reflect and repent for his own sins throughout his corrupt life.

There were a huge number of breath-taking moments.Perhaps the most impressive aspect of Dante's Inferno is the unique feel of each circle that Dante enters. Not since Eternal Darkness for the Gamecube has the environment played such a strong role in developing a truly frightening, and immersive experience. The camera work is fantastically atmospheric , and I cannot recall a situation where it inhibited my ability to perform onscreen actions. The demons that Dante faces are equally compelling and are a throw back to the class action-adventure days where each foe had an exploitable weakness. The overall presentation of the game is fantastic, albeit somewhat inconsistent. There are a huge number of breath taking moments, and they certainly outweigh the flat sections, but the discrepancy in attention to detail is still noticeable at a few points. Particularly disappointing was the final hour or so leading up to the climatic final boss fight. Rather than being a build-up to the final encounter, it seemed more like a tutorial that should have been placed at the outset of the game. All the same, the Blockbuster qualities of Dante's Inferno help to minimize the game's minor presentation faults.

Many have claimed that gameplay in Dante's Inferno is more or less a clone of the God of War series. Having never played the latter I can't compare the two, but I can say that combat in Dante's Inferno is everything I could want from an action-adventure title. The pace is furious, and stringing together hit combos through the use of Dante's scythe and cross is immensely satisfying. Actions taken by Dante will affect his progression to exalted Holy, or Unholy status, and each tree has a number of unique abilities that can be purchased through releasing the souls that Dante collects along his journey. While the game can come across as somewhat of a button masher at times, it's far more rewarding to mix up your angle of attack and defeat your enemies with style.

Hell is no walk through the park. A series of puzzles, quick time events and mini-games makes for fantastic pacing as you romp through Hell. Even on the second lowest difficulty setting, the game is a significant challenge. Where the log screen only shows roughly 9 hours from start to completion, I spent at least double that on my first play through. However, the action rarely becomes frustrating (with the exception of rope play), as there are frequent save points along the way that always allow you pick up not far from where you left off.

Dante's Inferno features a unique and well fleshed out story that is backed by a familiar, though impeccably strong, control system. Though the squeamish and easily offended may want to steer clear of this dark (and occasionally disturbing) game, regardless of the material, Dante's Inferno is a wonderfully crafted title that, if not for some occasional blemishes, would be an early candidate for game of the year.