Tales of Monkey Island: Chapter 5 on Game and Player 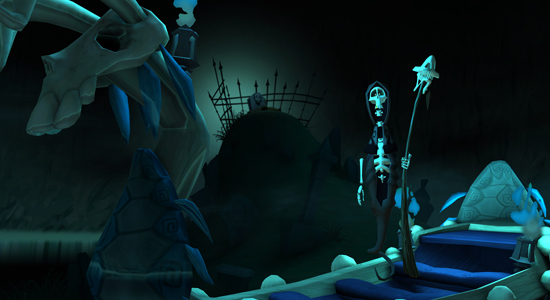 The thrilling conclusion to a legendary adventure.

I recently attended the Wake of Guybrush Threepwood, which was thrown despite reports of whether or not our hero had actually been killed. I suppose pirates will use any reason to get together for a few mugs of grog. While I was there, I listened as friends and other associates shared their fondest memories of the Mighty PirateTM.

I recently attended the Wake of Guybrush Threepwood.

As for myself, I have only known him through the experiences of this particular escapade, Tales of Monkey Island. I have learned many things, most importantly that should you ever need a distraction, it is best to point out three-headed monkeys, whether they are there or not, or that adding -y to anything automatically makes it better. Like piratey, chocolatey, or monkey-y.

I may be inexperienced in the world of Monkey Island, but I think Tales has captured what most people love about the older games: great writing, upbeat music, and an art style inspired by the original series that translates perfectly to a third dimension. Add on the incredible voice-acting talent, and you have all the ingredients for great a great adventure game.

Now that I have reached the end, I must say that there is one characteristic about episodic content that I couldn't have expected. Like watching a favorite television show, experiencing the full adventure in neatly planned morsels gives time for ruminating about what might happen next, and this really adds to the substance of the game. The time prior to this final chapter was by far the most difficult, and after attending the Wake I couldn't help but count the days until the game's release.

Plenty of chuckles, sword fighting, and puzzle-solving.Worst of all, how does one review the very end of a game? I can say without a doubt that this final chapter is the best. Generally speaking, it is consistent with the rest of the chapters in the mechanics of the game and there are plenty of chuckles, sword fighting, and puzzle-solving to keep anyone busy for several afternoons.

Despite what seemed like a rather uncreative use of character modeling for the NPCs throughout the game, the main and support characters stood out in their own unique ways. As I learned more and more with each chapter, it was hard to ignore the fondness for them that grew inside. I can see why the Monkey Island series has accumulated such a community of fans over the past two decades — these characters have depth.

Heartwarming, comical, and mind-bending — all the good things you could possibly ask for in a game are nestled inside Tales of Monkey Island, and with a finale that is just one surprise after another, it is hard to ignore the forethought and effort put into creating such a delightful game.

Gah, I want to finish the game so badly, but my computer locks up every time I get near the end :(

But from what I've played, it's great. Reminds me of what I love so much about the series. Here's hoping LucasArts remakes the second game like they did the first one!

Oh no! I hope you can finish it. The ending is just fantastic. :]