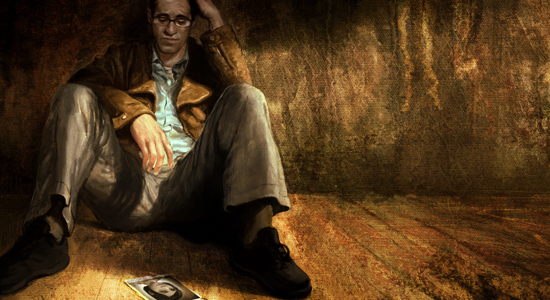 Some daring decisions made and owned all the way through.

he timing of this game could not have been better. Much like the Silent Hill of Shattered Memories, the town I live in is going through a bit of a cold snap. None of my friends have yet to turn into ice sculptures and glaciers aren't blocking my path to work, but it is butt-cold and my thermals are in the wash. Though, this could only help promote Silent Hill's brand of madness, as I have always been a huge proponent of pairing my games with the appropriate senses. I play my Silent Hills at night with the lights off, and no one is allowed to comfort me. My mind has been known to wander, but good games made great with the right surroundings can cement my focus for the long haul.

When I first booted up Silent Hill: Shattered Memories my senses were expertly honed until some far-too-clever individual slapped me in the face from behind the curtain. Before the title screen emerged a red backdrop with white text shoved its way into my retina:

This video game psychologically profiles you as you play.
It gets to know who you really are then uses this information to change itself.
It uses this knowledge against you creating your own personal nightmare.
This game plays you as much as you play it.

Life imitates art: glaciers aren't blocking my path to work, but it is butt-cold and my thermals are in the wash.Only on my second playthrough as daughter-searching Harry Mason could I decipher this gibberish. In an early puzzle Harry finds a key trapped in a soda can that you shake out to progress, but if you check the "Having a drink helps me relax" box during the psychologist sequence at the beginning of the game, the soda can appears as a beer can. Similarly, Harry stumbles into a bar rather than a diner due to the same box being checked, but neither time does Harry take a "drink" or "relax." These elements are cryptic the first time through, but in the end the payoff does just enough to equal the setup.

But scratch your head with abandon in Shattered Memories; combat is nowhere to be found. Dangerous times come infrequently in icy shifts, and only then does Harry witness monsters. These naked fiends also come in slight variation due to player decisions, but good luck taking much notice when all Harry can do is run away. At rare times a flare could be found to temporarily keep dog-piling monsters at bay, but no bullets ever get fired and no slashes ever get made. These instances are almost always the same and survival is just a matter of how straight you can run and how fast you can shake the remote. If a game really wants to scare me, be sparing with ammunition and generous with monsters. If I choose to run it's because I'm not confident in my last two bullets. That's the decision I want to be tortured to make.

Dangerous times come infrequently in icy shifts, and only then does Harry witness monsters.With conflict at a minimum, all that are left are mementos to collect, eerie ghosts to spot and a handful of smart puzzles. Rewards come in the form of private messages and recordings that are often plainly written or acted, but Harry's connection to some of them can be disturbing just the same. A player who takes initiative can dial up numbers found on posters and billboards for a bit of interest, but without any real conflict or active narrative I was often bored cold.

Konami and Climax make some daring decisions in Shattered Memories that they own all the way through. If this formula is extended into a sequel it will inevitably be more varied and fleshed out. But for my money I'd rather see the formula of last year's Homecoming evolve. And by evolve I mean give me a protagonist not searching for a missing child.

OMG ! Scariest game ever !
thank you for the review !