Shattered Horizon on Game and Player 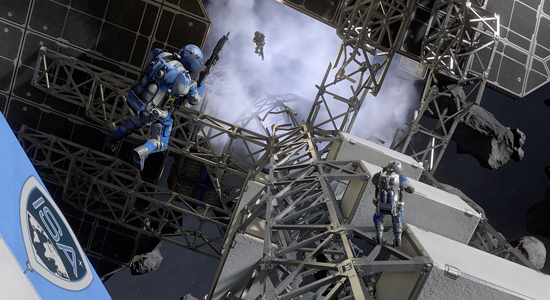 A unique, though somewhat shallow, experience.

uturemark, well known creators of extreme benchmarking software, have just released their first game, Shattered Horizon. The concept is interesting. Man has colonized the moon and just like most things we tend to get our hands on, we destroy it — or more literally, blow it up. Enter an international agency set to bring hard space-justice to those responsible and you've got the backstory for Shattered Horizon.

Whatever it takes to put me in an astronaut's suit armed with an assault rifle.

Man's designs for the moon: blow it up.

If you're able to run the game (among other things, Shattered Horizon requires a hefty video card and DirectX 10) from a functional perspective, this zero-gravity, multiplayer-only shooter handles surprisingly well. Trying to get your head around full-axis control is inevitably going to be an entirely disorienting process, but once you've got your bearings, you'll find that the control system provided works quite well given the inherent challenges of space combat.

Once you've gotten your basic key bindings under control, the next challenge is being able to use your new skills to actually kill the other team. While learning to move in zero-gravity is challenging, learning to move and shoot in zero-gravity is another level of difficulty altogether. Luckily, your character is equipped with boots that all you to attach to objects and debris floating around the level. This, if only temporarily, allows you to line up shots without the fear of floating away to the nearest galaxy. While free-gliding combat is also possible, it requires a substantial amount of time to get the hang of.

Gimme the usual: four maps, three modes, one weapon.In an interesting move by Futuremark, Shattered Horizon ships with four maps, three game modes, and one weapon (though, to be fair, the weapon has both short range utility and a long-range scope). While having a single weapon present in the game allows for matches to be far more skill based and easily balanced, there's no denying that things start to grow dull after a while. Furthermore, while the four settings are visually impressive, they all tend to play out in much of the same way and lack any sort of real diversity. The three game types are also nothing especially riveting, featuring your standard death match, capture-the-flag, and assault modes. While DLC has already been confirmed, this lack of substance may result in a loss of players that otherwise would have enjoyed themselves.

My time with Shattered Horizon was, for the most part, a positive one. The attention to detail was incredible, and the core gameplay was finely tuned and satisfying. That being said, while the core may be solid, a lack of augmented features has stunted my return to the game. While possibly a symptom of being a multiplayer-only game, there's never a feeling of progression while you play. Shattered Horizon has established an interesting concept and expanded the field of first-person shooters, and hopefully with subsequent releases, will provide more depth to an undoubtedly well crafted game.