Cities XL on Game and Player 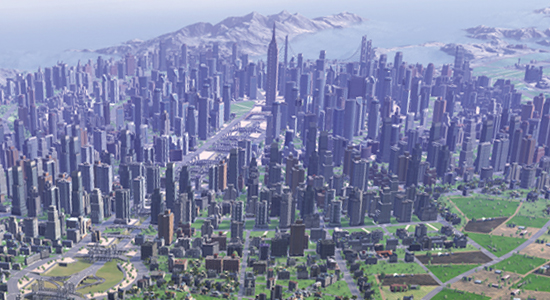 green line stretches off into the distance, and with a click it becomes a road connecting a sprawling neighborhood to downtown shopping centers. The camera zooms in and everything gets bigger: the trees, the streets, the buildings. As the zooming continues cars appear out of nothing, and then people, instantly moving in their respective avenues. An old lady walks by a young man headed to work; two children chase each other in their backyard. With a simple keystroke the camera flies across town, over skyscrapers, over farms, and ends at a harbor where ships sit nestled in their docks, waiting to export goods to other cities.

Never before has a city-building simulation game been given the scale of Cities XL. Creating the city is only the beginning. Building a network of trade agreements in order to provide necessary utilities and services eventually becomes mandatory, as the careful balance of the local economy depends on an incredible number of variables, and unless you happen to excel at spinning plates, this could prove challenging.

Cars appear out of nothing, and then people, instantly moving in their respective avenues.

But perhaps that is what some of us tend to enjoy about games such as these. To tread carefully and build in such a calculated manner is indicative of those gamers who prefer the micromanagement style of play. I have only had it less than a week and I can already tell that I will be spending a lot of time planning, analyzing, and creating.

Learning to play can be tricky due to the moderate learning curve, and the tutorial feels only somewhat comprehensive. The best way to learn is to dive into Solo Mode, where an empty planet waits to be developed. There are five general categories of land to build upon: mountains, valleys, canyons, green plains, and coasts. Each has its own climate as well as the amount of certain resources available.

And therein lies what truly governs the path your city will take — available resources. From buying ground water or electricity, to selling high tech business or outsourcing workers, how you develop or trade resources is the name of the game. Meager trade contracts are available in Solo Mode, but to really get the bang for your buck you will need to take your contracts online.

Purchasing the game comes with a week-long subscription to try out the MMO/social networking features, but month-to-month subscriptions are necessary if you wish to keep the doors open to more trading options. Not to mention keeping the ability to visit some really breathtaking cityscapes for inspiration!

Monitoring the state of your city is easy, too. Another menu lets you highlight a certain feature you want to analyze and an overlay on the city shows you who is satisfied, wealthy, employed; the coverage of municipal services, the boundaries of water tables or fertile land; and a live traffic display that highlights congested areas. It is very easy to use and comes in handy when you aren't quite sure what you can do to make the populace happy.

My biggest problem with the game is that no matter how hard I try to create a normal-looking avatar, I end up making something nauseating. There seems to be a disconnect where these cartoon-like people were used in some things and then the hideous-avatar-maker was used to fill in the rest. It is baffling, but thank goodness you don't have to stare at your avatar while you play!

Despite such a minor, silly thing, this game sucks up a lot of my time, as most simulation games do. I have created a variety of cities just to get a feel for it, and I am constantly going back and forth to compare changes in economy and satisfaction levels. As an avid fan of simulation games, I heartily recommend this for gamers who love to see how far they can take it or just want to play a game that isn't as demanding as many are these days.