Fossil Fighters on Game and Player 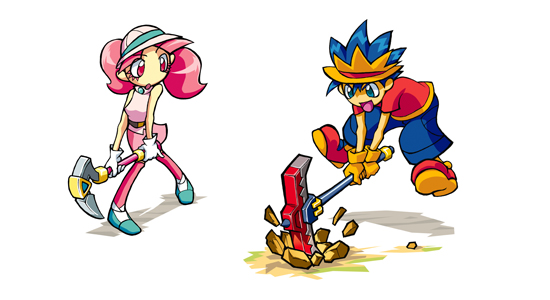 hen I was asked to review Fossil Fighters for the DS, I could not have been more offended. A Pokémon ripoff that seems to skew even more kiddie? Maybe it was my Watchmen: The End is Nigh review that showed I needed a break from the ultra-violent? Regardless, agreeing to Fossil Fighters was the best decision I made all month.

Newsflash: I still love dinosaurs. And I love pressing Y to hear them roar when prompted to do so. While the dinosaurs in Fossil Fighters aren't all historically accurate, the fossils dug up encased in stone do enough to excite the boy I still am inside. 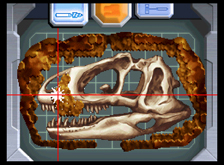 Coax out fossil remains with a drill.

The game starts out like Trauma Center, but instead of prodding internal tissue with a stylus, the player pounds stone with a hammer and coaxes out fossilized remains with a drill. And blowing into the mic removes debris in the most effective blow-mechanic yet. But the most ridiculous addition is the countdown timer. Imagine an archaeologist with Tourette's syndrome thinking their precious fossil rock is a bomb about to go off, and you've got the idea.

After the remains have been successfully uncovered, a "vivosaur" featuring brighter colors than a gaudy group of ravers is magically birthed out of the lab. They come with a myriad of RPG-like attributes to pore over, and the more successful the excavation the stronger the vivosaur. The upgradeable equipment, such as better sonar for digs, helps make this an addictive process.

While there is enjoyment to be had in raising these beasts from the soil, the greatest satisfaction comes from battling them in one-on-one duels with goofy, strewn-about characters. A battle plays out like a turn-based Pokémon match, but the strategy required for placing vivosaurs in attack and support zones is enough to have to stay awake. My trouble with Pokémon stems from the monsters having various random attributes and complex character-class relationships, all to be realized in the dullest of battle scenarios. Fossil Fighters serves up a comfortable amount of fighter depth while ratcheting up the thrills in battle. Yes, please. 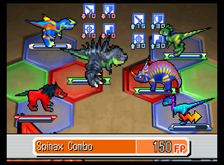 Think Pokémon plus strategy.Fossil Fighters' Vivosaur Island is rather small, but populated. Warping to dig sites from a central hub makes the game move quickly, and the Zelda-light dungeons and drama are a bonus. It's a shame that a stop-and-use pickaxe is all the player has to interact with in the over-world, but the game's quirky characters — equipped with well-written dialogue and exaggerated animations — make it forgettable. Be on the lookout for the Lara Croft inspired character; Japanese developers still got it when it comes to spoofing other games.

Be warned that Fossil Fighters will cause want for grittier dino-on-dino action, but satisfaction comes from the many polished aspects that scream Nintendo. So dig out your dinosaur dioramas; they just went back in style.