Trine on Game and Player 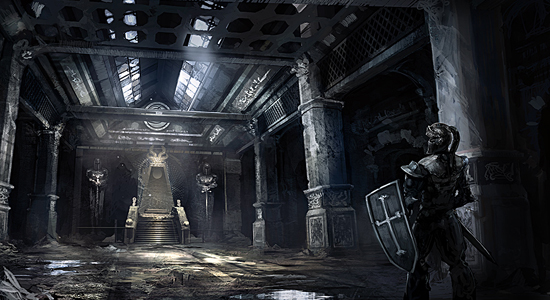 Games don't always need to break the mold to be memorable.

t seems as though the success of smaller developers relies on releasing something that innovates within the genre — one game that does what has never been done, and puts them on the gaming map.

Frozenbyte, a relatively small Finnish development house chose a different path with its release of Trine.

Instead of uncharted you'll find that things feel . . . familiar. This heavily physics-based, 2D plat former reminded me of Fable turned sideways with a dash of Prince of Persia. That immediate comfort translated into an instantly immersive experience. Frozenbyte didn't set out to break the mold; rather, it shaped what existed to near-perfection.

The journey (which is narrated wonderfully) unfolds from the perspective of three unique characters — a thief, a warrior and a wizard. While their motives and history aren't particularly memorable, a chance encounter between the three ends up forming an unbreakable magical bond, and sets the course for their adventure. For the most part, the story behind Trine isn't that spectacular. That's not to say it's bad; it just provides little more than structure for the environments you'll traverse along the way. These environments, however, are central to the experience, and arguably Trine's biggest success.

Beautiful artwork and dazzling colors make each stage in Trine a sensory treat, while solid design ensures limited repetition. In order to progress, environmental puzzles involving use of the three characters' unique abilities, in relation with the robust physics engine, must be solved. The thief, equipped with a bow and grappling hook, may be found useful when crossing large pits or scaling high walls. At the same time, the wizard's ability to conjure boxes and planks, as well as levitate them, may be appropriate for turning switches and creating barriers. While the warrior tends to be the least effective at solving puzzles, his strong combat skills allow him to find his niche when enemies overwhelm (at least early on). As the game progresses, you'll find that certain abilities do tend to fall off to the side, while others (like the wizard's conjure spell) seem overpowered. However, for the most part, Trine feels well balanced, with each character seeing a significant chunk of time on my play through.

Each of three characters
has unique abilities.While the environments are truly the central focus, you'll find that combat is surprisingly rewarding. For instance, with the warrior, having full control over the shield's range of motion allows for a much more engaging blocking system, while the thief's bow can be used effectively at range and offers an equally satisfying experience. Though lacking in variety, enemies are intelligent and bosses are challenging. Initial success involves deliberate use of both ranged and melee attacks, but like the wizard with puzzles, the thief ends up leading the way against most attackers.

Despite tapering off just a bit towards the end, Trine delivers one of the most complete and enjoyable PC experiences I've had in years. Varying difficulties and local cooperative play, for up to three players, make up for the relatively short campaign, which lasted roughly 4-5 hours or normal difficulty. Even though Trine has been under fire for its relatively high price point ($30 on Steam), those willing to spend the money will see quite a return on investment.