Overlord II on Game and Player 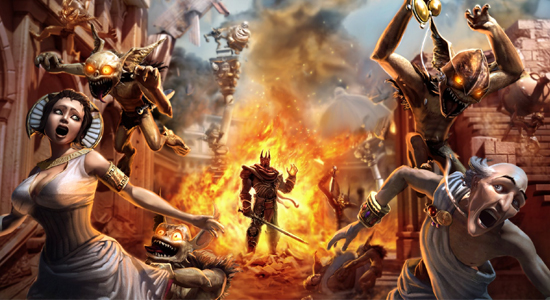 It's good to be bad, but it's better to be evil.

nce upon a time there was a little boy with a magical gift. The townspeople of Nordberg hated him and so spitefully called him "Witch Boy." Shunned by his own people, the boy turned to the darkness that grew inside him. After a time, he was visited by a rather ugly fellow, Gnarl, who had been searching for someone just like him.

The Netherworld was in need of a successor since the old Overlord had mysteriously perished. With Gnarl as his advisor, the boy trained deep in the belly of the Netherworld and eventually grew up to become evil's new master. In the meantime, a plebeian civilization rose to power above ground and quickly spread across the land.

Players test their mettle
as the new Overlord.

To test their mettle as the new Overlord, players are sent with a small squad of minions to take back his old town from the gluttonous governor Borius, an obese man whose portly figure hardly stays within the confines of his own garb.

Once the Overlord has taken back control of his town, he is faced with a choice: turn Borius to dust, or control his mind. As in the previous game, the Overlord will come across similar choices in the future which will transform the Dark One into a ruler of destruction or of domination.

Being a big, bad ruler of darkness comes with several perks. The most important is the ability to control a horde of gremlin-like minions. These little creatures are extremely vital to the Overlord. Just like the first game, there are four types: brown fighters; red fireball-throwers; green, smelly ninjas; and blue healing minions that can swim. Other perks include a dark, underground tower to stash treasures as well as serving as a home to the mistresses collected along the way.

There are many new types of challenges and all are difficult in their own way. If it were not for the fact that the control scheme was not improved, they might be rather enjoyable. Imagine controlling a group of minions, whose type can be selected individually with the right bumper plus another button, and moved with the right analog stick. Now picture yourself on a boat. Controls for the boat use both triggers, tapping A rapidly increases the rowing tempo, and any minions that are not rowing are controllable with the right stick (a necessity when the ship is attacked by overweight mermaids).

On top of this, another ship has stolen something important from the Overlord, so it is rather important to catch up and let the red fire minions catch their sails on fire. Did I mention this ship goes much faster and can ram anything into a million pieces? And that the hippy elves will board your ship amongst all the insanity? I died about twelve times before I resorted to a very cheap maneuver rather than follow the game's instructions.

There was one actual improvement to the game — minion mounts! This was a brilliant idea from the start, and I especially enjoyed the use of wolves. They are immensely powerful, but thankfully mounts are limited to certain areas. Otherwise I would not have been able to finish this game thanks to the child-sized spiders of Everlight town. There is roughly an hour or more of hacking and slashing at the Spider Queen's endless swarm of minion spiders that will become available as mounts once the many-legged queen is defeated. Pardon me for not getting excited.

Give pieces a chance:
spare not a single hippie elf.My personal arachnophobia aside, this is definitely a cool idea. The game already employs several options for creative strategy, but this now opens it to another level. A green minion on a spider mount can climb walls and position themselves out of harms way and still defend an area from imperial soldiers by way of sneak attacks. This would be a definite positive if the camera control were more cooperative.

Anyone who adored Overlord might put up with the aggravation, as I have. Despite the gradual style of adding more layers of complications, the point at which playing Overlord II becomes maddening arrives far sooner than in the first game. Sadly, I am not sure this sequel serves as a very good introduction to this series. For folks who are interested in trying on the Overlord's shoes, it may be wiser to play the first game instead. The original game was far simpler and despite any issues with controlling all four types of minions simultaneously, it was definitely more enjoyable in terms of game play.

How could a game that is so frustrating score so well with most reviewers out there? It is really obvious that a lot of thought and effort was put into this game. The story is as hilarious as it was before, if not more. And there are many useful, creative features and new types of controls added, but unfortunately the base controls were not improved — and so the frustration becomes compounded when the new features do not work as expected. As lovable as these comical gofers are, such an immense oversight should not be forgiven.