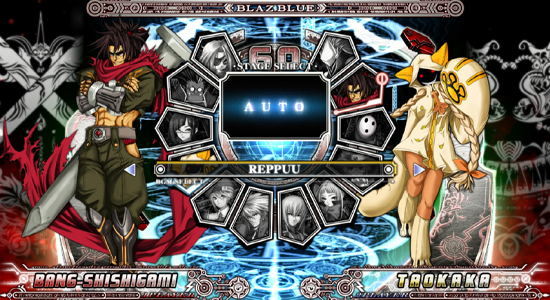 The most dynamic fighting game to date, hands down.

ew development houses know how to wring out their nightmares like Arc System Works. After several years of milking the maniacal series Guilty Gear, this developer turns around and does something rather un-Capcom-like: They start fresh. BlazBlue: Calamity Trigger isn't the first fighting game to exhibit rebirth within Arc System Works, but its audacious 2D art and deep combat systems mark this developer's true HD debut.

Each character is made
unique, requiring a different
strategy to master.

The fantasy-themed Battle Fantasia was released on current-gen systems last fall. With characters trading the usual, overwrought sprite work for practical polygons and a combat system that's on the simple side, Battle Fantasia lacked the gusto to fill Guilty Gear's heavy-metal clogs. But as an appetizer to the feast that is BlazBlue, it was successful. Both games come equipped with 12 characters, which may seem underwhelming in today's everything-but-the-kitchen-sink roster that most fighting games boast, but in the case of BlazBlue, each character is made unique and requires a wholly different strategy to master. This makes for the most dynamic fighting game to date, hands down.

Taokaka (whose name writes its own jokes) has arms like swinging meat with a stuffed-kitten exterior. Her hidden claws impale as she says, "My nails are itchy." Iron-Tager is like The Beast, complete with little glasses and big brain, but made into a giant, red devil wearing electrically charged gauntlets. If an opponent is hit by his Spark Bolt attack, they're magnetically drawn into palms made for throwing. As for the most bizarre creation (likely inspired by Kaonashi in Spirited Away), Arakune morphs and hovers and throws curse-equipped bees. Cursed foes sire damaging hallucinations such as more bees.

Quirk is in full regalia.With a wide array of characters, you would think it impossible to weave a cohesive story that accounts for so many worlds. And you'd be right. The individual stories (played out in Story Mode) boil down to overly long text on static backgrounds complete with voice-acting and non sequiturs. But it's somewhat entertaining, and quirk is in full regalia; players wanting themes ripped from popular anime then dipped in mad game-makers' minds are in good hands.

After a few days with the game, I felt pretty good about my Taokaka. I took her for a stroll online, and after a handful of lag-free matches, humiliation sent me cowering to the main menu, gasping for air. While BlazBlue is a new franchise, it already plays host to dedicated combo masters. If possible, stick to friends with this one.

Arc System Works continues to stun with polish. The playful music and unique mechanics help comfort the player as the visual psychosis does its best to disturb. Carl Clover fights alongside his dead sister sealed in the form of a life-size marionette . . . there, I said it.