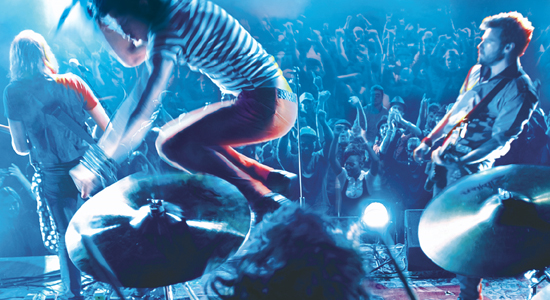 he beauty of reviewing a Rock Band game is having an excuse to practice your fake chords, for the next big nerd party is always around the corner. The unfortunate thing is I'm reviewing Rock Band Unplugged for the PSP. While the core game is clever and fun, the rewards this time are lonely.

Rock Band's relation to this game
is only skin deep.

Rock Band's relation to this game is only skin deep. While Unplugged looks like its console cousin, plastic instruments are noticeably (and preferably) absent, so the experience is whittled down to matching notes with just the D-pad and face buttons. Guitars, drums and microphone are represented in four parallel running highways, and the player switches between them with the L and R buttons in an effort to keep the band in harmony. There is no singing, just notes that represent cadence. It appears unmanageable, but only single phrases are spit out, offering slight breaks to make switching to a new instrument possible. During these breaks the instruments keep playing, so at times it lacks complete one-to-one control over the output. Thinking of the experience as more of a music puzzle helps relieve this feeling.

As for songs, it's the usual Rock Band suspects. Standouts like "Pinball Wizard" by The Who inspire forced button presses. But the PSP's surface is hard like glass, so turning finger power up to 11 is asking for trouble. For this reason I prefer the gentle stirrings of the few electronic songs included. A little Freeze Pop never gave anyone a blister.

Tour Mode is exactly like that of the console Rock Band, and the in-game currency won is purely for new duds and instrument skins. But here this repeat-offense is more of an issue. When noticing your singer's new merman pants during a performance results in missing a note, these bonuses only hinder. Harmonix should let us spend currency on new skins for note buttons and the highway floors they scroll down on. You know, the stuff we actually look at during the song.

Multiplayer missed the flight. It's jarring in its absence. Warm-up mode allows one player to take on one instrument's whole part in any given song. It hurts that the game ships with no option to have other players pick up the slack. The likelihood that a sequel or downloadable content will add what should be there day-one saddens me.

Speaking of extra content, the PSP Store has new songs for sale, but the $1.99 price for one short single-player tune is far too much — especially when full iPhone games are half that.

While the gripes are many, Rock Band Unplugged does much to put players in that familiar zone of hitting multipliers. But even the game's main intention is its greatest fault: It reminds one of an exponentially more fun experience.