Zen Pinball on Game and Player 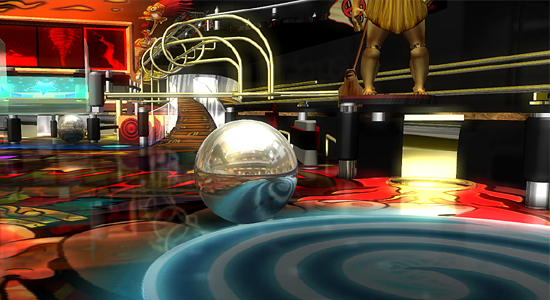 The best offering of the hobby available.

inball is nothing new to me. There were countless hours spent on the Harlem Globetrotters physical table that once held a spot in the den growing up — not to mention afternoons after class playing Epic Pinball releases (many of which I still have on their original 3½" floppies). Though it may have been a while since I've sat down with a pinball game, I was nevertheless excited to see what Zen Studios had to offer.

Immediately upon firing up the game, you'll notice the impeccable presentation. Be it the menus, operator settings, or the tables themselves, everything feels like it was pulled straight from an arcade.

Everything feels like it was pulled
straight from an arcade.

Throughout my time spent playing Zen Pinball, the sense of authenticity was perhaps the greatest strength..

The four tables included, while all completely different in theme, masterfully replicate what I've come to expect from a physical machine. It's visually stunning, probably more so than any other arcade game I've played in a while, and if the lights and sounds aren't enough to keep you hooked, uncovering the secrets of each table (which let you snag those really high scores) and tweaking things just the way you like them, should .

In a game where accurate mechanics rise to a new level of importance, Zen Pinball fully delivers. There's not much to say about the physics engine other than it just feels right. There's also a variety of views to cycle through so that at least one should suit you well enough. Everything comes off as very well-polished, and nothing really caught me off-guard, even though my substandard high scores might suggest otherwise.

Speaking of high scores, just like the real thing, that's largely what you're chasing with Zen Pinball. Single-player game options are virtually non-existent, but multiplayer does feature a few different game modes, including a scoring race where players compete simultaneously on their own tables, just to keep things interesting. There's also support for the PlayStation Eye, so everyone can see just how serious you are about pinball. Online tournaments are also supposed to be offered every so often (indicated by a flashing icon on the main menu) but none were available during my time with the game.

Whether you're a pinball enthusiast or not, Zen Pinball is a fantastic addition the PSN, and a wonderful pick-up-and-play-style game; and for $10, there's no question that you'll be getting your money's worth. While it may come across as a little shallow for those less familiar with pinball games, it's still easily the best offering of the hobby currently available.