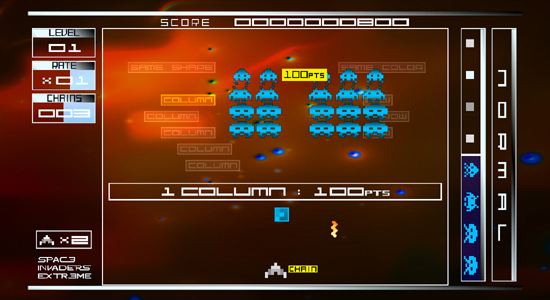 When it works, it's hypnotic.

ith downloadable content being big business these days, retro revivals are what the suits now push. Some companies are skilled at resuscitation, while others find that perfecting the formula of what changes and what remains the same is tricky. Take Microsoft's XBLA release of Lode Runner, for example. Forfeit the 3D modeling and achievements, and it's the same game it was almost 30 years ago. Preferred or not, the game won't turn any heads. On the other hand, Taito Corporation's XBLA release of Space Invaders Extreme will cause one to lose their balance.

I can't imagine much head-banging was performed by those that played the original Space Invaders at arcades or on the Atari 2600. Apparently the creative minds at Taito always had a problem with that. The thumping sounds of Space Invaders Extreme leaves my neck sore and my ears ringing. Happy now, Taito?

But beyond its rave-like exterior, SIE features some clock-melting ways to score. The perimeter of the screen is cluttered with indicators, and one may request a licensed pilot to help land this sucker. Do take the time to learn the meters. Without knowledge of how to score and how to combine the colors and shapes of invaders to access bonus rooms, the game ceases to be any fun. This is where the demo and lack of any real tutorial is a great disservice.

Here's an example of how scoring can be a tightrope walk: To the left of the action is a meter that drains but fills every time an invader is hit, and without ever letting the meter drain completely, it adds to a chain. Getting a chain of invaders to build relinquishes a good score, but shooting down four invaders of one color in a row drops a devastating power-up. So, the player must hunt the right victims and do so fast.

These invaders won't just parade about waiting to get disintegrated, either. They attack in such varied ways one may think Insomniac Games was brought on as a consultant. As for the invaders' spontaneous behavior . . . don't get me started.

Last year we saw the invaders' new moves on the DS and PSP, but I won't spend any time talking about those versions because SIE's big-budget psychedelics mixed with original sprite work demand to be played on a widescreen HD display. But with the XBLA update comes a clumsy online component. If it's not wasting the day searching for players, it's dealing with distracting lag in a game where timing is everything.

But when SIE works, it's hypnotizing and well worth $10. And someone at Backbone Entertainment must have forked over the $2.50 for Community Game Groove because the sound effects are now better integrated with the musical score. Wherever the developers got the inspiration for this release, I pray they remember how to get there because Arkanoid called and demanded a redo.