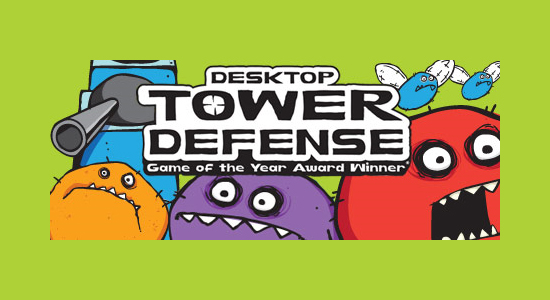 A general adaptation of the underground sensation.

lthough Desktop Tower Defense is described as a puzzle game, this game type is actually a subcategory of the RTS genre. It is very simple and straightforward: design clever mazes made with towers that are will divert and obliterate the "creeps" that will do whatever they can to march across the map to their goal. If any are able to slip through your defenses and reach that goal, your health score drops a point or more for every one that goes through.

There are many types of towers, all ranging from strictly anti-air towers that shoot those pesky flying creeps to frost towers that slow down anything that passes their way. 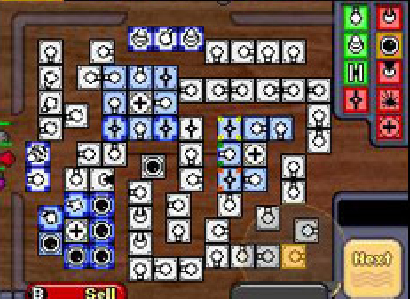 Divert and obliterate
wave after wave of creeps.

With the money earned for every kill, towers can be upgrade or replaced with more suitable ones depending on what types of creeps are coming down the pipe. A small, helpful "creep-ticker" is constantly updating as the game progresses, giving the advanced warning you need to prepare for whichever type of creep seems to give you the most trouble.

But variability doesn't end there. With three basic levels of difficulty and two modes called Challenge and Fun, there is really no reason to stop playing this game. These different modes may vary the types of creeps, where they spawn, and how often. The initial amount of money can be adjusted as well as how many types of towers you will have to choose from. The only thing this game doesn't have is the option to play against other people. It is disappointing to see this missing, as it is part of the reason this type of game has thrived for so long.

Based on the original browser game written in flash, DTD for the Nintendo DS is a simple transplant from browser to handheld, with the addition of achievements called "Trophies." There is also a "Load Last" feature that saves your initial arrangement of towers before the first wave begins.

Controls are very easy to master and depending on preference, a player can use all face buttons or just the stylus. It seems the frustration level will make a difference in how successful either option will be.

The one major problem with this game is the graphics for towers and creeps. As with the browser version, these icons are very simplistic, but it seems that somewhere along the way the developers decided it would make more sense to create oversimplified versions of the towers in 12-by-14 pixels. They seem fine at first, and then they rotate and what was a simple cannon now looks something like pixilated roadkill.

The other issue with this is the system of tracking upgrades. Colors are used to denote what level the tower is — but good luck seeing the darker colors, since each marker is only one or two pixels in size. But I suppose they felt they made up for this with the special editor they include in the DS version. It allows you customize the images for every tower and creep. Yay.

New players to the tower defense genre will most likely find this game easy to pick up. Easy mode is just that, and with several options in Fun mode, the learning curve is gradual and forgiving. For those who prefer an instruction manual, there are several tutorials on adopted strategies. 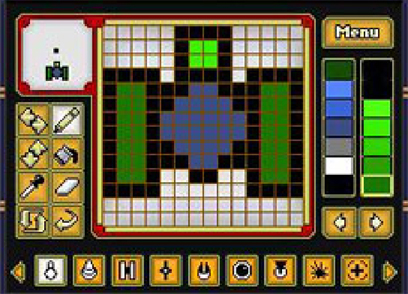 An editor tool, if that's your thing.Those with a background in Tower Defense may be unimpressed by the visuals as well as some of the basic designs of the game. The general rule still applies: many weak towers are better than a few strong towers. This seems to hold true for early and even mid game strategies. But even so, there are plenty of ways to make this game impossible in the custom options menu.

With games like Desktop Tower Defense and Ninja Town making it into the mainstream, this underground sensation is sure to be a hit with gamers of all backgrounds. The real beauty of this sub-genre lies in its variability. So many scenarios can be applied, challenging the player in new ways and forcing them to form new strategies. Thankfully Desktop Tower Defense has included as many options as possible which seriously lengthens its replay value.

Those of you who are on the fence should definitely check out the original game, Desktop Tower Defense Pro, which is free to play on the Hand Drawn Games website.