Wanted: Weapons of Fate on Game and Player 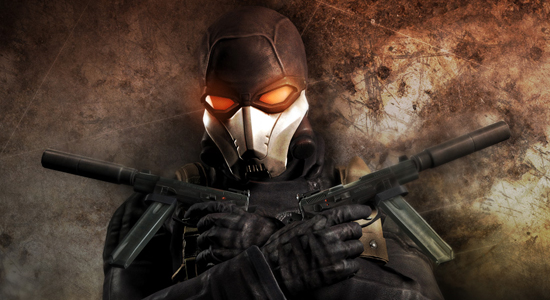 xpecting quality from a movie-licensed game is often questionable logic. Repeatedly, low-quality titles are hastily produced as part of the short-term moneymaking blitz each blockbuster release generates. Arriving on shelves long after the movie, Wanted: Weapons of Fate has had the luxury of an extended production time to separate itself from the traditional movie tie-in, and holds closely to the aesthetic of the film as its reference: It looks like Wanted, it sounds like Wanted, ballistic chicanery and disaffected protagonist intact.

Linear to the greatest extent.

Its visual authenticity may be a boon for fans, and while praiseworthy, it remains one of the few redeeming features of a title bereft of quality throughout its soulless and downbeat progression. Thankfully, the experience lasts fewer hours than you could count on a single hand.

Players scamper around dimly lit corridors and indistinct outdoor environments disposing of near-crippled AI enemies, while ducking and diving from one cover point to the next. It's linear to the greatest extent, and has a distinctly on-rails feel, and any attempt to move freely outside of cover is wholly discouraged. While behind cover, the ability to use blindfire to pin down a target and move unnoticed to a new vantage point is a clever mechanic, but the limited AI enemies are so easy to defeat it starts to feel like an exploit if used too often.

Bullet-curving, a major stylistic hook of the film, takes center stage once again in the game, and the mechanic converts fairly well. A simple lock-on style move, bullet trajectory is controlled via analogue stick and on-screen meter. Occasionally, the game fails to recognize your intended target, locking onto thin air. As each curved bullet uses a notch on the adrenaline meter, it can be frustrating to lose a shot so senselessly, but is a minor irritation compared to the game's more offensive control issues. Other special moves that consume the meter are available but are rarely interesting to use and offer minimal tactical advantage within the obnoxious, cover-laden level design.

Moving from the perspective of Wesley to retrospective missions featuring his father, the story is very clumsy, featuring little meaningful content beyond the basic presentation of a villain and subsequent dispatch at mission's end. The voice acting employed is woeful, even from big name actors such as Morgan Freeman and Terrence Stamp who reprise their roles from the film. Wesley's voice actor in particular is very flat, delivering the crass and nihilistic lines with little conviction. The nature of the dialogue often follows the expletive-laden, loutish tone of the film, but appears increasingly childish in video game form, removing the thin veneer of context the film featured. Naming the game's easy difficulty level "Pussy" may be in line with the tone of the Wanted franchise, but becomes unpalatably coarse for a video game.

Too easy, too short and too clumsy.Despite its startlingly short completion time, the game becomes repetitive very quickly, feeling laborious and drawn out after just a few stages — repeating the same techniques, with little motivation and investment in the uninspiring and genuinely unlikeable characters. It's too easy, too short and too clumsy to warrant the repeated plays that the game encourages with the promise of unlockable modes and extra characters, each proving as ultimately redundant as the last.

As a movie-licensed game, it offers enough similarities to the source for fans to identify with the visual style and themes. Sadly, its amateurish execution will put off all but the least picky player. The mild irony of the film is lost thanks to nonexistent storytelling, and its deliberately adolescent themes degrade into an obfuscated layer of vulgarity. Its broken controls, mindless AI, and thoughtless level design all contribute to one of the most unrefined titles of the year. Wanted: Weapons of Fate is a joyless experience, in both its gameplay and its tone.