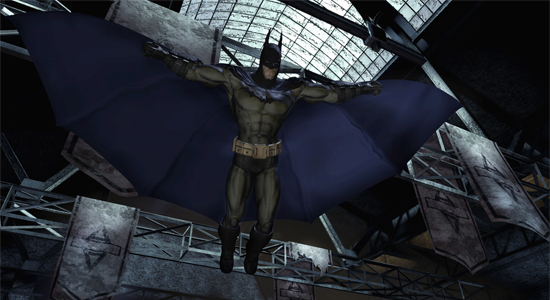 A Serious House on a Serious Earth.

ecent times have seen Batman rise from the woefully mismanaged property of past decades to once again become a pop culture icon with depth and resonance. The sterling animated series, and two of the best genre movies of all time pushed Gotham's protector firmly into the mainstream consciousness. Finally, the world of video games gets a chance to experience the adventures of the Dark Knight, as it should be in this time of resurgence for the character.

Authenticity is the word of the day. Featuring a wealth of background fiction despite its self-contained environment, the game feels like it was made by developers who understand the character and world of Batman implicitly. It's a well-formed and fleshed-out space, a believable arena for both Bruce Wayne and the slew of villains featured to exist. Most of all, the physicality and persona of Batman are perfectly captured, a delight for fans. Thankfully, there is more to Arkham Asylum than an exercise in fan service; it's a gratifying and potent combination of genre elements that is sure to please, with or without the draw of the license.

The sheer volume, pace and
variation of attacks is breathtaking.

Arkham Asylum treads a path close to the Batman books, rather than match the semi-realist tones of The Dark Knight. It's a worthy tale, reassuringly convenient and predictable in plot, but in the vein of the comic's better arcs features little in the way of DC's impenetrable continuity and multi-verse confusion. It's delightfully simple, and the fun comic book storytelling is highly enjoyable. The game also follows the visual tradition of the Batman comics very closely. Batman is bedecked in his regular gray and black ensemble, and the environments are a mix of dark and grotesque with flourishes of Day-Glo greens and reds. It's a strong and fitting visual style, which remains distinctive, yet familiar to both film and comic audiences, Joker graffiti included.

Batman behaves exactly as one would hope, stoic yet dynamic, the range of movement in the character animation is purposeful. Even at full tilt on the analog stick, Batman moves at walking pace, prowling the hallways. A sprint move is included, but walking tall into a room full of thugs or searching a room for clues, adds to the composed and cool nature. Sadly, instead of implementing subtle HUD indicators to highlight clues in the investigation portions, a separate display mode dubbed Detective Vision adds a distracting blue filter to the screen. It really takes away from the experience and should be used sparingly — the game looks great without it.

Armed assailants will prove to be tough challenge, the inherent danger and level design railroads players into a stealth approach. While a distinctly important part of the shadowy character, it can prove a touch repetitive in practice. The stealth based moveset feels very limited, but use of the trademark gadgetry can help keep things fresh. The frightened reactions by AI opponents, who become increasingly panicked as their numbers diminish one by one is a nice touch, adding to the immersion.

While the stealth mode may limit the style factor of playing as Batman, the opposite can be said for the open hand-to-hand battles. The sheer volume, pace and variation of attacks that occur via the free-flow combat system is breathtaking. Deceptively simple, the two-button combat gives rise to a dazzling array of moves, animations occurring in a context sensitive manner, dependent on enemy proximity and position. It's truly empowering, and taking apart a wave upon wave of henchmen in what appears to be overpowered style is a real thrill. It captures each element of being Batman succinctly and completely, from silent predator, to genius detective, to all-round bone-crunching badass.

Let's broaden our minds:
Mark Hamill reprises his role.A hero is only as good as the villain they face, and Arkham Asylum features a deep and well-realized rogue's gallery. Harley Quinn, Poison Ivy, Bane, Killer Croc and of course the Joker give Batman constant cause for concern. References to other classic villains and events are littered throughout the game — an empty cell belonging to the escaped Calendar Man, and the shape-shifter Clayface masquerading as Jim Gordon to name just two. All are represented well, particularly through voice acting. Interview tapes are dotted around the landscape to collect, each offering insights into the subjects state of mind pre-takeover. Mark Hamill reprises his role from the animated series and turns in a wonderfully theatrical performance, insane yet calculating, endlessly entertaining. The influence of Scarecrow also provide some of the games most startling and affecting moments, providing the well-worn backstory of Bruce Wayne, and clueing in newcomers to the somewhat troubled psyche of the protagonist without delving into needless detail.

Just as Atari's Ghostbusters adaptation turned heads earlier this year, Batman: Arkham Asylum provides a clear example of how to turn a popular licensed property in to a compelling gameplay experience, while maintaining the unique qualities that fans have come to know and love. Rocksteady has taken the level of authenticity and attention to detail to great heights, and the sheer production quality of the final product might surprise many. Ignoring occasional design missteps (detective vision, and the obscuring size of the onscreen avatar), it leaves a smile on the face after each crushed and dismantled foe, and manages well-placed references to Batman lore without alienating newcomers. It's a welcome addition to the typically flavorless world of comic book based games, and provides the quintessential Batman experience.