Wolfenstein on Game and Player 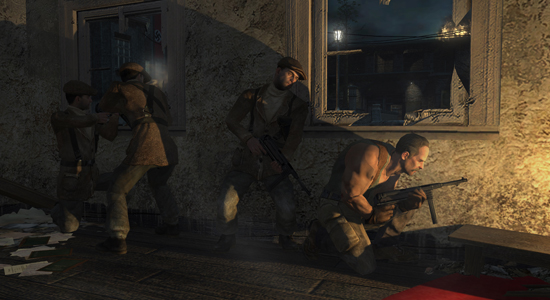 ooking back, I'm not sure how much of Wolfenstein is purposeful irony, or a sign of a developer making unwitting mistakes. I must ask, if the returning protagonist BJ Blaskowicz is deliberately rendered in the vein of James Garner mated with Max Headroom? Does every non-player character sound as they do in homage to Hans Gruber?

Set in a semi-realist World War II city under siege, the game presents an interesting backdrop of enemy street patrols, embittered insurgents, and black market profiteers for its pseudo-mystical action, and the utilization of an open world in a first-person shooter still remains a novel experience. Storyline missions take place within instance-style areas — consisting largely of tunnels, archaeological dig sites and, of course, top secret underground facilities — that fail to recapture the cohesive ambience of 2001's Return to Castle Wolfenstein. The basic FPS action works well, but it's far too focused on using supernatural window-dressing to draw distinction from the multitude of World War II-based first-person shooters.

Players obtain The Black Sun — a famous occultist icon — early in the game. Once snatched from the clutches of the Nazis, it bestows several otherworldly powers to aid his super-soldier antics. Players can use the object to reveal dimensional portals and hidden pathways, create a deflector shield, or slow down time to dodge enemy fire, with Matrix-styled bullet trails included as standard.

Potential to make use of the abilities in a subtle manner is extinguished at near every turn, the challenge to find a concealed pathway through deduction giving way to painful signposting. You genuinely can't fail to spot the next checkpoint, when some careful hints would have proven far more satisfying. Set pieces such as collapsing structures or walkways scream at the player to utilize the required super power in such a loud and inarticulate manner that any sense of excitement or spontaneity is completely removed. Tragic, considering the potential for adrenaline-charged escapes that would have perfectly suited the setting, and provided a much needed counterbalance to the core action.

It's not all bad, however. The hub-world is convincing and enjoyable as a battleground, and one could almost be sympathetic to the underground resistance were it not for their appalling accents. Certain cutscenes portraying the local people's plight at the hands of the Nazis hint at the potential for elaboration and a meaningful hook for the weightless narrative. Approaching patrols will panic freedom fighters, adding to the ambience, and the ensuing shootouts are actually considerable fun. Had this been a game set within a Nazi-occupied state that slowly becomes engulfed in a hellish dimension over the course of a well-paced narrative, it would have been acceptable. As it stands, Wolfenstein is a game that ends up damaged by needless embellishments, a counterproductive unique selling point.

Skittish freedom fighters
add to the ambience.Instead of providing variety and tactical opportunities, BJ's powers can make combat far too simple, and it's not as though the enemy intelligence routines need any reason to be made easier. The rank and file troops appear to sit and wait for the inevitable, line up in doorways, and often throw grenades within hilarious proximity to their own location. Naturally, supernaturally gifted enemies offer more of a challenge, but even the more vicious assailants can be subdued far too easily with the flick of a mystical switch. When an enemy is slowed to beyond a crawl, picking him off with a headshot does not amount to an engaging battle.

When hearing the name Wolfenstein, it's hard not to think of series originators id, and the high production values that go hand-in-hand with their releases. Sadly, this latest version feels like a farmed-out afterthought. After the solid modernization that Return to Castle Wolfenstein presented, it's a disappointment to see the series move away from its simple strengths in favor of underdeveloped representations of Nazi mysticism and ultimately predictable genre staples.