Henry Hatsworth in the Puzzling Adventure on Game and Player 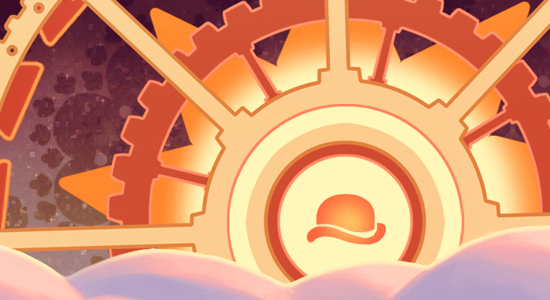 Henry Hatsworth in the Puzzling Adventure

The quest to become the ultimate gentleman is no easy endeavor.

egends tell of another world where riches upon riches are waiting to be discovered. To gain entrance, one must find the pieces of a very special golden suit. To wear it, suave and sophistication are requisite. Only the most dignified of gentleman has the ability to bear this magical ensemble for it gives the wearer the key to incredible riches and the power to conquer a world.

How lovely! The prospect of obtaining gold and elaborately encrusted jewels would make any adventurer's mouth water. But a magical suit? Only a practical adventurer, such as the esteemed Henry Hatsworth himself, would recognize that this is complete poppycock. 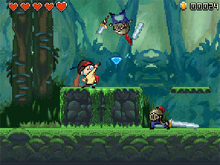 Search high and low for
the illustrious golden suit.

As the dapper Henry Hatsworth, a prominent no-nonsense treasure seeker and member of the Pompous Adventurer's Club, you search high and low through ruin after ruin for parts of the illustrious golden suit. Venturing through many uncharted places in this side scrolling platformer and puzzle amalgam, Henry stumbles upon an immaculate golden hat. Once he places it on his head, he discovers the true magical qualities lying within as his gray hair turns to a youthful ginger. But the magic only lasts for as long as the Super Meter is full.

To gain this energy, Henry must wallop the enemies who will stop at nothing to prevent him in his quest for the best looking suit to ever exist. A mere slash with his foil or a shot with his trusty musket is not enough to send them to eternity. Once an enemy is effectively beaten on the top screen, they are sent to the Puzzle Realm where the job must be finished. Simply pressing a button changes focus to the bottom screen where switching columns of colored blocks and similar colored enemy blocks to form three of a kind is necessary to wipe them out for good. This mode is very desirable, especially during boss battles for it provides a short metal break and chance to breathe before leaping back into the fray.

Time spent in this Puzzle Realm is precious, for another meter monitors how long you can remain there, so use it wisely. Careless adventurers who do not periodically check this other realm from time to time will find enemy blocks creeping into the top screen where they have returned to harm Henry in any way they can. But fear not, old chap. Henry can dodge and counter to eliminate their threat in a way that only a true gentleman can.

Are you such an amazing adventurer that you find your super meter doubly full of energy? Good show! A flashing image of a teacup will signal that it is time for a break. A gentleman's break, that is. With guitar riffs that are sure to get your head banging, you see Henry with a cup of tea, and then equipped in a magnificent robotic suit he flies into the air before a British flag. As the music rages on and the Super Meter drains quickly, Henry and his invincible suit bash and stomp through the world defeating any who rival his path.

It may seem like everything is tea and crumpets, but Henry soon discovers his isn't the only stuffy treasure hunter out for the suit made of gold. The reprehensible Weaselby and his many cohorts race to find the golden items before Henry can, sometimes leaving crude letters of repartee. These foes are quite the challenge, for you must employ nearly every skill and weapon you have gained upon the way all while keeping your Super Meter filled. 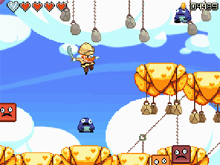 'Here we go: La la-la, la-la,
la-la la la-a-a-a, la!'As with some notable platformers, levels are grouped into chapters that end with one or two major scuffles and lots of treasure. Difficulty seems to curve upward steadily as Henry makes his way through the second world, especially near the end. Great feats of agility and effort must be performed by both Henry and the player alike, often times procuring a swear word. If the player is killed, Henry will emphatically show his disdain (often in unison with the player) by shouting "Poppycock!" as his body falls from view.

This is the game's only drawback, and with enough determination anyone can overcome it. The amusing nature of the game gives the expectation that this is meant for playing in order to relax, but both casual and orthodox gentleman alike will find it far less than a breeze. But who ever said that being the world's greatest gentleman would be easy? If you have the willpower and fortitude to keep going, the payoff is substantial. Remember, a true gentleman would never give up so easily!

This marriage of genres is so impeccable that switching between the screens becomes habit immediately, as if this is how it was done since the dawn of time. No stylus is ever needed, and it makes sense when playing — it would only slow you down. If you think Brain Age will make you quick on the draw, play Henry Hatsworth. A tremendously challenging game that rewards with sidesplitting dialogue and handsome level design, Henry Hatsworth in the Puzzling Adventure is truly a good show, indeed.

Henry Hatsworth in the Puzzling Adventure