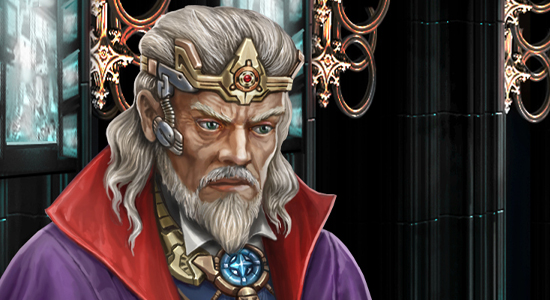 rom battling dinosaur pirates to mining asteroids in enemy territory, Puzzle Quest: Galactrix takes the merging of genres to the limit. As an MRI agent fresh out of the academy, a player will travel throughout the galaxy investigating a trail of mysteries that will ultimately expose a greater threat to all mankind.

With numerous factions to ally or annoy, one can easily spend hours manipulating the balance of good and evil within the reaches of the galaxy. Gain or lose faction points from assisting systems by spying, delivering cargo, or just seeking revenge. Completing missions and winning battles will earn you intelligence points. 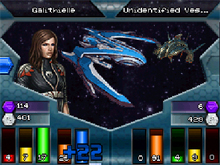 Spy, deliver cargo, carry out
revenge — across the galaxy.

These points are the experience you need to increase your level and improve your abilities in weapons, science, engineering and piloting.

The main game mechanic, the puzzle board, consists of hexagonal gems of different colors that clear from the board if aligned in rows of three. Battles, mining, creating items and even price haggling are determined by variations on this classic puzzle game. Earn credits by selling raw materials or by offloading enemy contraband. Purchase weapons, science upgrades and bigger, better ships to aid in your mission.

Casual gamers will find the game's simple interface attractive and extremely easy to get into due to its addictive nature. This game is well-suited for the Nintendo DS since battles only last a few minutes and the auto-save feature activates frequently.

Monitoring the current missions is easy from the inventory menu — since you are only allowed four at any one time it makes tracking each mission a breeze. Navigating your vessel from system to system could not be easier. By simply touching the screen your ship knows exactly where it needs to be.

The most prominent hurdles in the game are the Leapgates. Built by the megacorporations of Earth, these gates are the only mode of transportation between star systems. A virus wipes out all functioning gates before your ship has a chance to leave spacedock. From the very beginning you must hack each gate you wish to enter by playing a variation of the puzzle game: clear gems in the color order displayed in a limited amount of time.

This hacking mini-game can prove to be the cause of a lot of frustration for both casual and hardcore gamers alike. Despite being categorized in three levels of difficulty, the fact that the player will never know what pieces are to come brings in too many external variables. There is too much left to chance to assume that a strict time limit is enough to determine difficulty. There were many instances where it took 8-10 attempts to hack a medium level Leapgate, but it took only two attempts to clear a difficult gate. 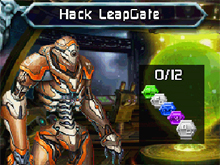 Let me through, already:
hacking Leapgates.To add insult to injury, hacking takes up about 60% of the game and the gates that you open will shut down after enough time has passed. Perhaps the pain of this experience would be dulled by earning experience from hacking, but that is not the case. It would be even better if clearing chains of gems would pause the countdown clock rather than wasting precious seconds while you helplessly watched chain after chain of gems clear the board.

Despite this major frustration, Puzzle Quest: Galactrix could addict almost anyone. Whether you need to pass the time while traveling or you are a puzzle game connoisseur, this clever marriage of puzzle and RPG genres brings a whole new kind of fun to handhelds. Explore the galaxy and save the human race by playing the puzzle game of the future!