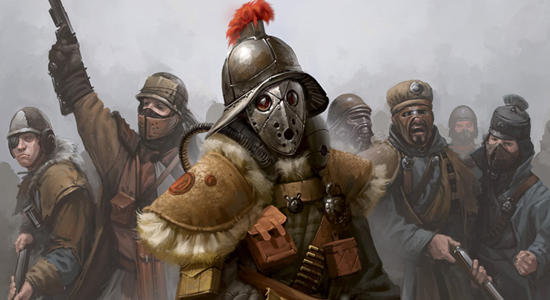 Making up for a lack of resources with ingenuity.

hat independent developers may lack in resources, they often strive to make up for with ingenuity. Though these titles may not feature significant visual polish or big budget flair, it is their goal to immerse us through their creativity and thoughtful perspective. As is the case with Isotx's Iron Grip: Warlord, gaps in production value are somewhat remedied by the game's unique angle on combining a real-time strategy game with a first-person shooter.

Make use of both
RTS and FPS elements
to defend your stronghold.

Let it be said, if you're a fan of today's modern shooters such as Halo 3 and the Call of Duty franchise, it can be hard, initially, to see beyond the dated graphics. There are no fancy lighting effects here, but there's enough variety between locales that they each carry their own flavor. The sound is fairly generic as well, although understandably so, and not so bad that I took special notice. No, Iron Grip: Warlord doesn't score particularly high on the "sensory impressiveness" scale, but it also doesn't exclude mid-to-low-range PCs like many of today's titles. This is good, because the folks at Isotx have some good ideas that everyone should be able to see.

That's all there is to it. There's nothing much for story; think of Quake III Arena or Unreal Tournament. You just move on to the next map after you've survived. The fun, however, comes from the varying ways in which you can choose to set up your defenses. Maybe you'll try a machine gun nest alley one time and a layered system the next. Coming from a person who enjoyed constructing different patterns of Proton cannons in Starcraft more than anything else the game had to offer, this is where the fun is to be had. The downside, unfortunately, is the limited number of structures available to build with. That being said, the core idea is still solid.

Though attached seamlessly,
FPS mode quickly gets boring.Being able to seamlessly switch between both interfaces (FPS and RTS) was interesting at first, but the options available as a soldier were limited and quickly got boring. There were also a number of glitches, in particular one that wouldn't allow me to correctly set up my machine gun, thus limiting my time in FPS mode. The AI was more or less a series of path-finding scripts than an actual adaptable opponent — another reason why I had far more fun with the RTS portion of the game.

A short play session with fellow Game and Player editor Ed Kirchgessner was all I had to go on for multiplayer (the servers were fairly empty), but it was clear that the game was meant to be played with others, rather than offline, and as such, the amount of fun players have will undoubtedly be higher when in the company of others.

At its core, Iron Grip: Warlord may not seem to reach much further than a three-dimensional game of tower defense, but it's obvious that Isotx is going in the right direction. Though the signs of a limited budget can be glaringly obvious at points, the concept itself is sound, and one that I hope the team can build on in the future.