Spore on Game and Player ttrition between a muse and a masterpiece is high, the consequence of adding weight and price tags to great ideas. Will Wright himself, in 2004, admonished the same press that helped announce his plans for a video game contriving biological species from microbe to majesty. "I think it's too much hype. About a year ago, we were realizing how much hype we were getting," he said. "We've gotten to that point any additional hype isn't serving us well. It's a concern." Did anticipation driven by novelty obligate Maxis Software to impossible standards, or was Maxis' ambition pushed beyond feasibility? My review of the Spore Creature Creator left me concerned that neither Wright nor his development team really investigated evolution or anthropology. Whether by lack of conceptual focus, incomplete execution or the simple passage of time, Spore has finally arrived as a fragmented, tragically forgettable title. 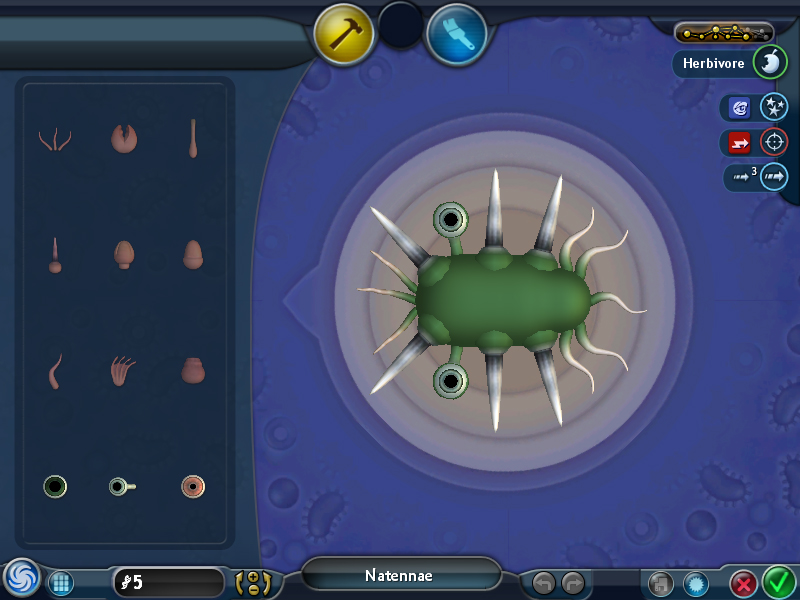 Did it really need eyes?

Spore's evolutionary sequence spans a lifeform's journey from cell to creature, to tribe, to civilization, to galactic empire. In these five segments are Spore's weaknesses: flawed design, missed opportunities. Spore tries to be five games but delivers virtually nothing that other titles haven't over the last half-decade.

Life begins dramatically in this universe: germination by meteorite. After a few, short million years, blobs and squigglies swim in primordial soup. Players are invited to enter the competition with a microorganism of their own, and lead it to the top of the abiogenetic bouillabaisse. Gameplay in the first phase is a simple, top-down dodge-'em: consume plants or fellow protozoa, avoid being consumed, and with accumulated DNA — the first two stages' currency — adapt to survive the environment and grow several times to become a more complex lifeform. In a two-dimensional version of the Creature Creator, a blob of many different possible colors and textures may be outfitted with mouths, feelers, and eyes.

Eyes? Surely, some of this exaggeration is meant to endear microbiology to gamers of all ages. But is the subject so inaccessible? Much of the layman's attraction to evolution comes from the mysteries of mutation and variation — how, say, sensory apparatus goes from flagellum to oculus. Were Spore more scientific, additional parts could be more meaningful, even educational, than the given array of colorfully named maws and tendrils.

Each time a player's blob ascends to the next scale of development, its environment at once diminishes and expands — monumental bubbles and organic helices become modest obstacles, old rivals shrink into insignificance, and colossal new threats squirm into view. 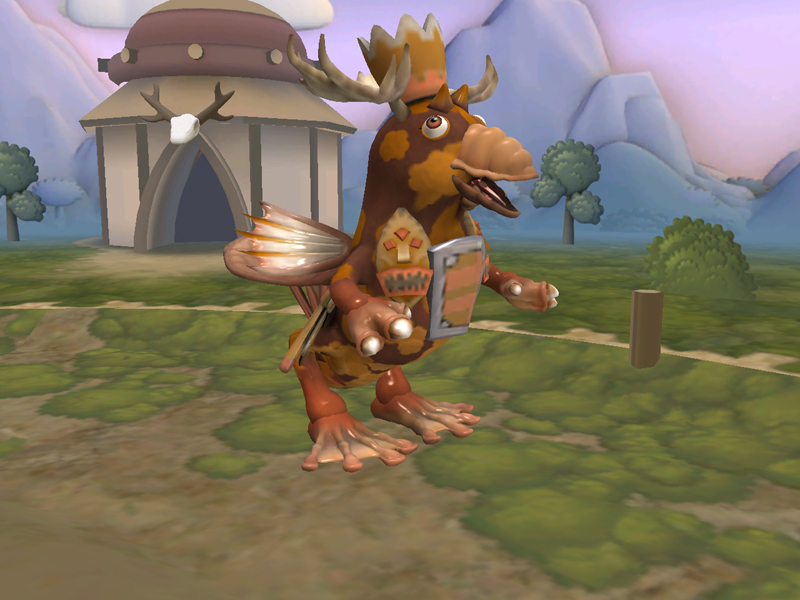 Stylish, but superficial.The effect is stunning, and for a moment the potency of Will Wright's premise seems possible to realize in a game. Unfortunately, it's short-lived, and the last time players will see real innovation.

The Creature stage is an extension of the Spore Creature Creator: build a vertebrate and send it out into the wilderness. Through social integration, cooperation or extermination, players work towards sentience.

I briefly wondered if conditions would preclude low-hanging fruit, requiring me to elongate my creature's neck, or endow strong legs for leaping, or wings — or something. Instead, food was everywhere to be found, always within reach. In Spore, the environment — ex vi termini the cause and purpose of evolution — remains unchanged. Climates, biomes and their handful of flora cover an entire planet. Speciation, dwarfism, gigantism; meaningful coloration or physiology? Nothing. Yes, the number of creatures designed by Maxis, hundreds or thousands of them, ensure some variety. 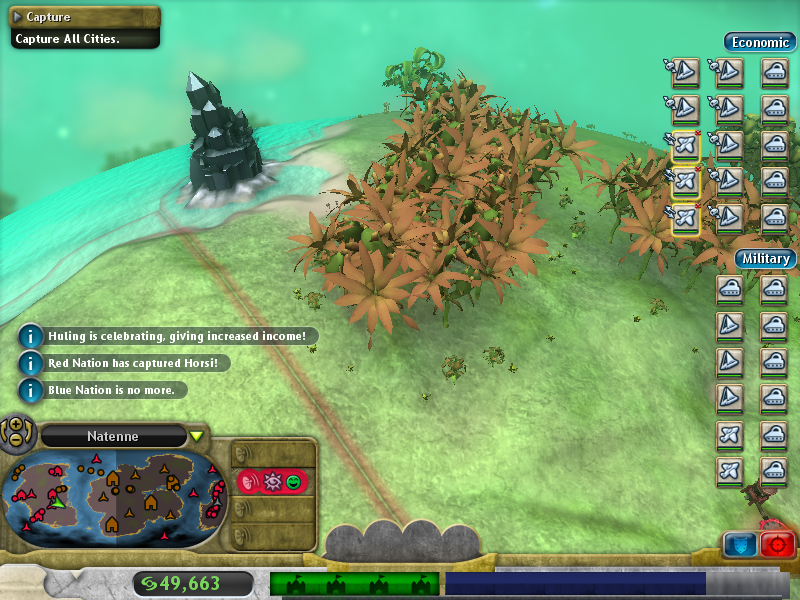 Money made this world
go round, and my way.But none of the animals directly motivates adaptation. During the second or third change to my creature, it dawned on me that I could trade every one of my creature's characteristics for another one: a brown avian one generation, a green snake the next, a blue simian after that; flying in the face of evolution.

Accuracy in itself wouldn't be vital to enjoyable gameplay but it appears, as with the Cell stage, that the fascinating principles of evolution are, in fact, the best sources for a game about evolution. A tech tree, a sequential and exponential flowchart representation of development, common to RTS and turn-based strategy games, would have a proven basis for mapping out inherited traits of choice or circumstance. It's all there in the fossil record. Interlocking predatory and defensive features, on the order of rock-paper-scissors, would give value to interaction between species. There is a lot of fun to invest in a master plan, adjusting it to edge out competing schemas. Spore doesn't bother with any of this, its mostly purposeless creature editor reducing heredity to a chronological jumble.

Signs of overreach in Maxis' scope appear in the Tribal stage, which plays like an alpha build of Warcraft: Orcs & Humans. Players may clothe their creature and erect a few functional huts in a circular village. From that village, the tribe sustains itself by hunting, gathering food, and domesticating animals. By allying with or exterminating rival villages near it, obtaining new tools and knowledge, the tribe advances. Directing villagers is frustrating, as is the intrusive time limitation (rather than passive unit limitation) of food, and the use of tools results in no significant difference in performance. All that is memorable is the phase's clumsy interface and insubstantiality.

The Civilization stage, insipid and too easy, could be anybody's afterthought. But it's Maxis Software's — and alongside compelling, dedicated series like Age of Empires and Civilization, it is an embarrassment. Players manage factions of the regnant species via cities. Vehicles, for economic or military ends, may be designed first for movement on land, then by sea, then through the air. Opposing factions are to be conquered by pen, coin or sword.

In practice, those mechanics proved dull. Never did I face a challenge, nor reach a noticeable — let alone cardinal — turning point in my species' anthropology. Yes, ostensibly, my style of playing conferred my city-state with economic advantages. But in about twenty minutes — almost less time than it took me to design every single custom building and vehicle — I followed the straightforward rules for urban planning, had established trade with every nation on my continent, bought impenetrable defenses with fat profits, and economically defeated my neighbors by "purchasing" and annexing their cities. 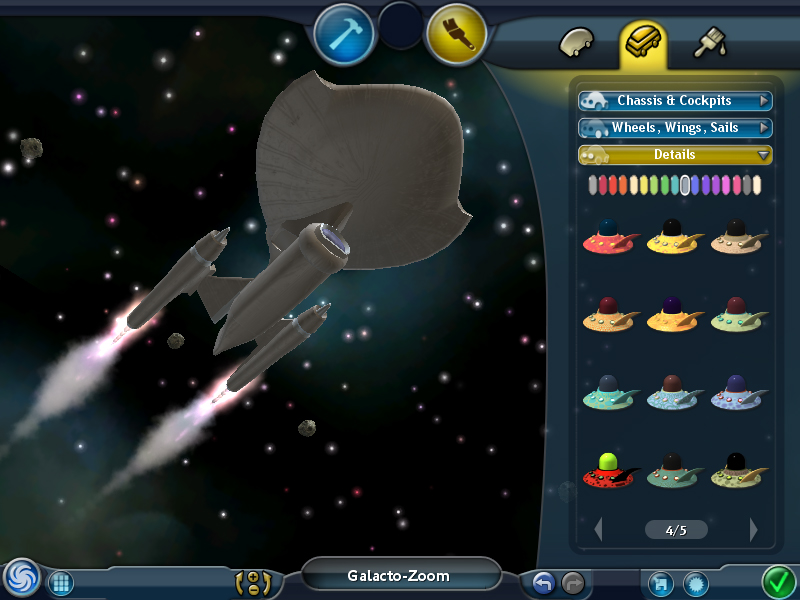 Spaceship design: I couldn't resist.Moments before the remaining, belligerent nation finished off its conquest half a world a way, I had allied with it. Our hegemonies joined, and Spore's most poorly developed, least interesting phase was over.

Apart from abandoning unit creation mechanics introduced and reinforced in stages one through four, the Space stage offers the most variety in gameplay. Perspective moves from limited omniscience to managerial third-person, and the player assumes the role of a space captain. A long tutorial introduces tools used to build star-spanning empires: faster-than-light drives, lifeform abduction beams, colonization and terraforming packages, and an assortment of energy weapons. Jumping from star to star, a player searches for valuables, claims and populates planets, conducts negotiations and bridges alliances — while fun, missions make the ship captain something of an intergalactic errand boy. And: there are assaults from intractable aliens bent on dominion, usually targeting the opposite side of the empire. After the third alien attack in twelve minutes, any player will reassess the worth of awards needed to complete the game.

The score: two worthwhile stages out of five, nearly a coincidental reflection of this review's star rating. Trying to fit evolution in a video game is laudable, but Spore resolves as an unsuccessful experiment. Of course, there is still that Space stage. Do Will Wright and Maxis have another eight years?