Electronic Arts and Maxis tantalize players by depriving them.

eptember, even double-time, can't get here fast enough. As a stopgap, Electronic Arts and Maxis have rationed, to those who have waited anywhere between six months and eight years for Spore, an extract of Will Wright's making sport of playing God: Spore Creature Creator. Accompanied by a trial edition, it sells for $10, and as a download can be purchased and started up in fifteen minutes. 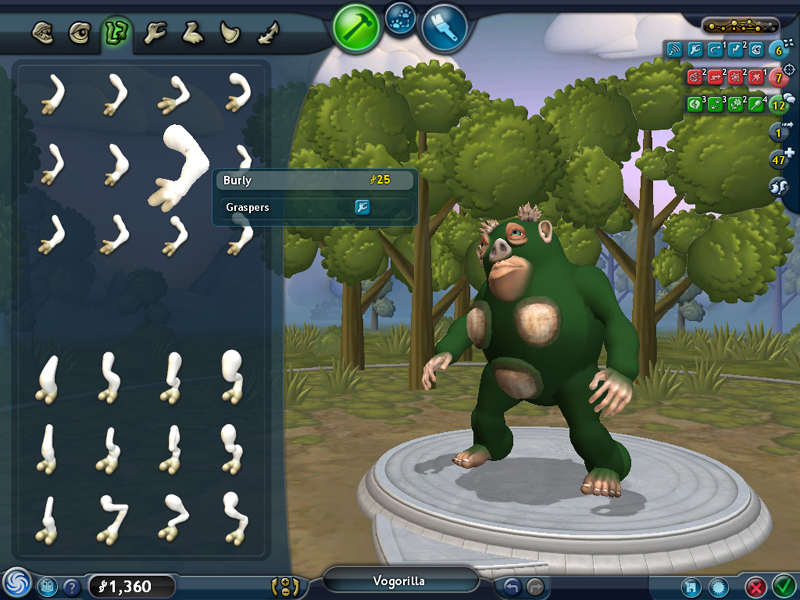 Methodical or not, assembly is easy.

The creation process begins shapelessly, a floating gob of putty defined by several vertebrae. Points of leverage appear when the cursor hovers, allowing a player to stretch, fatten or narrow the trunk with a minimum of difficulty. To the left, a menu bar arranges seven palettes of appendages in a rough order of biological necessity: alimentary, ocular, locomotive, manual, combative, decorative. Mouths, eyes, legs and the rest can be fitted anywhere, in nearly any number, on the body and shaped accordingly. Symmetry rules: dragging a part laterally helpfully splits it, while adjustments apply to a pair of parts. Tetrapods are allowed, but it's no trouble to make a simple bilateral.

Even if a player starts without a particular creature in mind, Creature Creator eases the process towards a satisfyingly fantastical or familiar animal. Starting with what resembles a duckbill might motivate spindly legs, webbed feet and a pair of wings — or not, resulting in an otherworldly but faintly avian look. When the anatomy is complete, players can fashion a hide using three layers, dozens of patterned textures and hundreds of colors.

Interaction is pleasant, if limited. As lighthearted tribal music plays, the creature responds dramatically to each bodily addition or subtraction; beaming when an appendage is planted on it, fussing when a piece is pulled away. 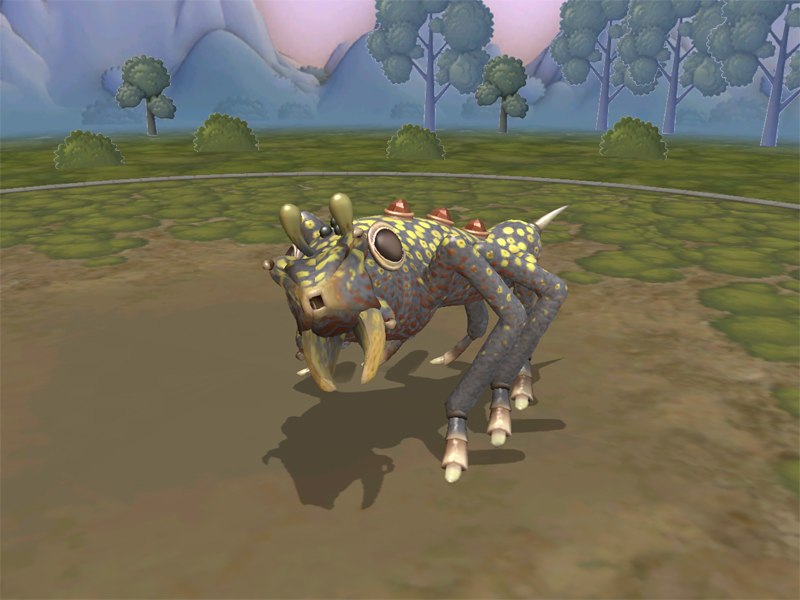 Players looking for a sim-genesis
will be left wanting.At any time, players may try a "test drive" that consists of directing the creature around a corral and commanding it to exhibit any one of 24 prearranged behaviors. Most actions are anthropomorphic — human emotions, expressions or dance steps — and seem out of place in an editor ostensibly meant for the wild. A few other options can be selected, like begetting up to three tagalong offspring. Both screen captures and videos can be taken, and creatures can be saved and shared online.

But there isn't much more than that. After about three tries a player will notice that each creation, but for outward appearance and sound, behaves identically. Parts correlate to RPG-suited attributes, such as attack, defense and health; but these qualities are neither reflected in the animated being nor demonstrated in live trials. Players invigorated by mere creation may not mind as much as those who want application — although some in the former group may notice that assembly limitations have nothing to do with an allotment of play cash, especially those who enjoy the challenge of subtractive construction. Anything goes, but with no appreciable consequences.

Stick a horn here, or there, however many you want — and the creature gains an offensive quality by fiat. Wings? Well, now it can lift itself from the ground. Whether a protuberance or a knob or a nub is, say, vestigial has no significance. Neither do size or placement. Yet as someone with regard for their extended index finger will attest, the differences between an ant's mandibles and an earwig's abdominal cerci are definitive. So are those between rattler fangs and water deer tusks. And they are what scholars and enthusiasts find so engrossing about biology and evolution.

Now, customization demands payoff. Nobody wants to adorn a creature with meaningless things. Simplicity, too, is Will Wright's vade mecum; the foundation of the Sim lineage. But while a game on a scale such as Spore's can only succeed with a wide audience if the sum of parts at least equals an ecological station, it hardly excels if performance is no more than numerical totals — rather than a reward for intricate design observed in anatomy and supposed in natural selection. To that degree, players would expect, from this introduction, more.

Spore has remained a fixture of imaginations through its decade-long conception because the game's press once promised something close to a real-time strategy gestalt. Offered the chance, people really want to guide, with only a light hand, life forms from speck to galactic manifest destiny. Here is a sign that, after years of auspices and praise, Will Wright not only hasn't changed gaming as we know it — but has made an unremarkable game, investing himself and his team in a subject about which they cared little to learn.

While what is hoped for may be in Spore — and we could be in for astonishment — this application suggests very little to that. If the demo itself included full palettes, it might have worked as a modest preview. Instead, twenty-eight choices of this or that cost ten dollars. So, a contrivance of marketing, Maxis' and Electronic Arts' product can at least be respected in terms of risk. Spore Creature Creator tantalizes players: it does so by depriving them.