Magicka on Game and Player 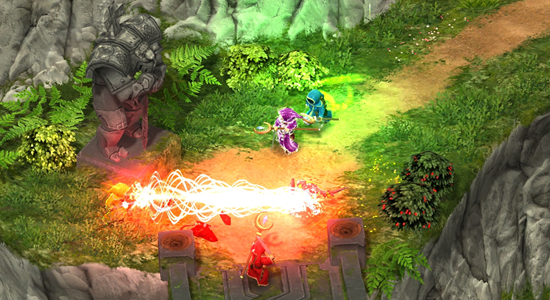 Good enough for a much more polished sequel.

h, Magicka. The majority of critics seem to agree that Arrowhead Game Studios' fantasy adventure is original and charming but is riddled with so many game-breaking bugs as to ruin the experience. A good month since its launch and numerous patches hence, and I'm sad to report that a large number of critical bugs persist. However, this is not the only major grievance I had with the game.

In this humorous romp you play as a wizard on a quest to kill some typical fantasy evildoers. Magicka keeps this clichéd premise feeling fresh due to its many moments of pop culture parody and genuinely funny dialogue. Expect references to anything from The Legend of Zelda and Highlander, to Rambo and Star Wars.

Fittingly, your wizard has eight magical elements at his disposal, which can be combined in any order you choose to produce different effects. When you've dialed in your chosen combination, the resulting spell can be cast outwards in a linear fashion, in a radial manner around your character, or directly on yourself.

The huge amount of spell combinations in conjunction with the game's dynamic physics allows for a staggering number of possible approaches to combat. The typical RPG-style element mastery comes into play, of course (tree monsters are weak against fire, for example) but that's only part of it.

The huge amount of spell combinations in conjunction with the game's dynamic physics allows for a staggering number of possible approaches to combat.

Is your current foe lacking a weakness to any particular attack? Douse him with water then hit him with some lightning for critical damage. Battling an army on a frozen lake? Melt the ice with a fire spell and watch them fall into the water and drown. Need a moment to restore your party's health? Protect yourselves with an impenetrable bubble shield and heal up.

For as good as the magic system is I would've liked to have seen a bit more variety in what you're asked to do with it. Most of the action hinges on combating fantasy types like orcs, goblins and warlocks, which is disappointing given the puzzle potential here. Despite implications from the opening tutorial, I've yet to see more than a couple of moments to tax the old gray matter in the campaign proper.

Speaking of disappointments, Magicka is still victim to many vicious bugs, particularly during online play. I've personally experienced many including crashes to desktop, characters simply becoming unresponsive, and players getting caught in geometry. Such occurrences serve to exacerbate some otherwise minor design problems like an inconsistent checkpoint system, the inability to join multiplayer sessions in progress, and the loss of checkpoints when you quit or get dropped before the end of a chapter.

Though these issues drew the most ire from critics, my biggest problem with the game is its single-player campaign. The developers seem to have forgotten to rebalance it, neglecting to cut down on the amount of enemies or make other concessions for solo players. A way to revive yourself a few times before hitting the Game Over message would have been greatly appreciated since you don't have any partners around to resurrect you. The game's chaotic physics also becomes a real pain here since being knocked into holes and other undesirable places results in instant death.

Knock-back frustration not seen since Ninja Gaiden, and at least back then you weren't multitasking.I've given up hope of getting past Chapter Six by myself. It's a multi-part gauntlet of enemies, normally only two or four at a time. These encounters would be straightforward except in this instance each stage takes place on a small floating island in the sky (technically in some evil wizard's mind but whatever) and if you get knocked off at any point you have to restart from the beginning.

Such occurrences are very high given that the area is populated exclusively with magic users who are constantly trying to hit you with spells that knock you back. Even my desperate defensive method of using shields formations as barriers only lasts so long. This is the kind of knock-back frustration that I haven't experienced since the Ninja Gaiden and Castlevania days of platformers, and at least back then you weren't multitasking complex spell combinations.

I should point out that this is only about halfway through the campaign, presenting the sharpest difficulty spike or steepest difficultly curve I've seen in a game in a long time. If this is the case of the latter, I really wouldn't like to experience the game beyond here by myself.

Playing the multiplayer with strangers isn't optimal either. Even if you manage to avoid the majority of critical bugs online, if you aren't lucky enough to end up in a group of players who are considerate and work together then more often than not things will devolve into a mess of team killings and frustration.

If you can't get at least one reliable friend to play with you I'd advise against picking up Magicka. There's a lot to like here, don't get me wrong. The freeform spell combining is quite unlike anything out there and its pop-culture-referencing fantasy world can't fail to at least raise a smile here and there.

But these positives get buried under the bugs, the cruel single-player and the unpredictable experience of playing with strangers. If you've got buddies who are eager to play then by all means, you're going to get more than your money's worth here and maybe one of the best PC adventures of the year. Everyone else should probably wait for a few more months' worth of patches and balance fixes. Or for a much more polished sequel.