Mass Effect 2 DLC: The Arrival on Game and Player 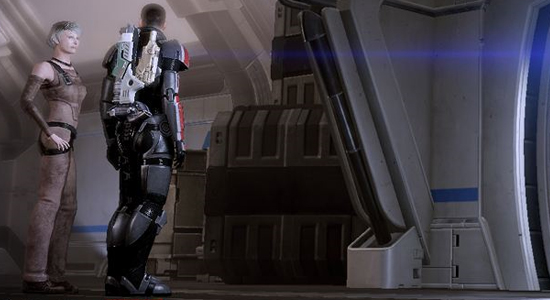 No need to live up to expectations to be a gripping ride.

ust off your Mass Effect 2 discs, because Commander Shepard and company are back one last time before Mass Effect 3, in The Arrival.

One of Earth’s deep-cover operatives has been arrested on the edge of known space by the Batarians after apparently discovering a Reaper artifact. As ever, it's Commander Shepard to the rescue. Potential spoilers prevent me from saying much else but needless to say a lot more will unfold over the course of this new chapter.

With that said, not a lot changes by the end of the experience. We’re left with one seemingly minor new piece of information but even that doesn’t concern the galaxy-threatening Reaper menace. It’s nice to see Admiral Hackett (your heard-but-not-seen senior officer from the original Mass Effect) reappear in the flesh but on the whole the plot doesn’t add much to the series canon. It comes off primarily as foreshadowing for the next game rather than being the bridge to it that Bioware had suggested.

The soundtrack is an apparent a shift back towards the Blade Runner-esque synthesized vibe of the original Mass Effect, sucking you right in.

But it’s a gripping ride while it lasts as The Arrival successfully manages to keep you in a high state of suspense from beginning to end. From the opening solo rescue operation to the high-stakes, time-sensitive nature of the events that follow, it had me on the edge of my seat almost as much as the dramatic finale of the main game.

A big reason why The Arrival sucks you in is the soundtrack. It’s perfectly crafted to accentuate the drama with original compositions as opposed to tracks already used in the main game and previous DLC. Better still, it feels like a shift back towards the Blade Runner-esque synthesised vibe of the original Mass Effect.

Shepard takes on this mission commando-style, adding a new twist on the usual squad-based game play. This didn’t really change how I approached the action nor did it feel more difficult without my companions (it might be a different story for lower-level Shepards, however) but it aided the tension, making it feel desperate at times. There are two other small but surprising gameplay twists worth noting, but I won’t spoil them for you here.

Something damning about The Arrival, though, is the lack of any meaningful decisions that carry over to .Mass Effect 3. Though Shepard is placed in a large moral quandary at one point, the player isn’t given any choice in how the situation plays out. Given the series’ affinity for providing galaxy-altering divergent paths and that the overall plot pretty much goes nowhere, this is a big letdown.

It's nice to see Admiral Hackett (your heard-but-not-seen senior officer from the original Mass Effect) reappear in the flesh.Some might complain that there aren’t any new weapons, loot or recruitable team members on offer here but since this is the final chapter and likely the last time most people will play Mass Effect 2 I don’t really find this an issue.

The Arrival will take about around two hours to beat, a little more if you to make sure you get the two optional achievements. It’s a lot less substantial than the superb previous downloadable chapter Lair of the Shadow Broker, though it’s priced at a fairly reasonable 560 Microsoft Points.

In the end, The Arrival provides a bit more Mass Effect 2 rather than a glimpse at what Mass Effect 3 might be like. It doesn’t offer any real closure for the game but as an additional chapter to an open-ended adventure I’m not sure how it could. Instead, it gives us one last go around the block with some extra foreshadowing of events to come