One-Liner: Scott Pilgrim Versus The Gamers on Game and Player 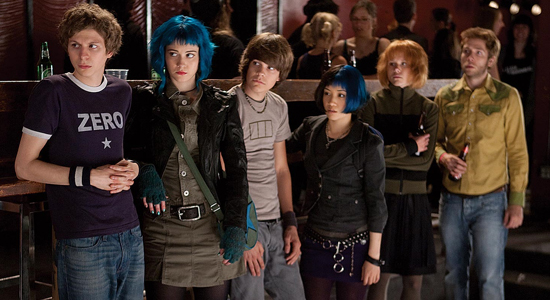 One-Liner: Scott Pilgrim Versus The Gamers

Did the video game inspired movie hit home with its key demographic?

n the latest edition of the Game and Player podcast I raised the topic of Scott Pilgrim, the comic book and movie series inspired by and highly referential of video games.

To my surprise, two out of the three of my fellow podcasters weren't really aware of the books or of their recent Hollywood adaptation by Shaun of the Dead director Edgar Wright.

On the whole the film hasn't been considered a financial success and some have argued that the gamer demographic — which you'd assume would be a big chunk of their target audience — was not big enough to elevate box office takings to a satisfactory level.

But it struck me that if only half of our gaming savvy podcast crew were aware of the movie and its subject matter, was this more a failure of promotion? Just how aware were gamers like yourselves aware that this film was created with you in mind?

The more I review information and media surrounding the film, the more I think it's simply a matter of age.

I doubt I could relate to someone like Pilgrim — possibly having no conscious memory before the end of the Cold War, certainly no comprehension of a world before computers and consoles, and an adolescence significantly influenced by the internet.

Being strictly a nerd, never a geek, I've always had an uncomfortable relationship with gaming and 'net jargon and lifestyles; enjoying the "scene" for what it provides for me — entertainment — but never, ever living it. Stories like these are probably a casualty of that distance and disinterest.

I finally watched this movie this weekend, After the podcast discussion I decided to by a copy. I must say I really enjoyed this movie. I am older but I did get the humor of it. That being said a non-gamer would not get this movie. I believe the marketing was targeted to a general audience and not enough to gamers. I have seen the trailers and had no idea of the reference to video games. The only thing I ever knew of Scott Pilgrim is that it's based on a comic book that I have never read.

I have seen this movie five or six times and own it on Blu Ray/DVD. When asked by a friend "is it really that good?" I explained "it's like someone made a movie specifically for me."

For members of my generation, bred in gaming culture, raised on Mario and weaned on Master Chief, this film is an exact snapshot of today, right on down to characters using slang terms (like "great story, man") which are regularly part of our everyday conversations.

Even if, years from now, I do not really connect to the scene portrayed, it will be like looking at a cultural scrapbook and seeing what the late 2000s looked like in the gaming mainstream. Still, even I have acknowledged the double-edged sword that is this movie: it encapsulates my demographic so perfectly that just about no one outside of the demographic, and especially no one not seeing the movie within about a year of release, will get it.

Pick this movie up now, Mike, and you may appreciate it (and see parallels in today's culture). Pick it up two years from now, and it will probably make no sense at all.

BUT stylistically, it is unparalleled. The uniqueness of the film's narrative delivery and cinematography (not to mention some of the best sound design I've ever seen in anything ever) makes it worth seeing if you're a fan of cinema. But if you're not a film buff OR a twenty-something games-obsessee, I suppose it's true that this film won't appeal at all.

I feel that any one of our generation (regardless of gaming knowledge) will find strong hooks in the film. Definitely give it a rent if you can.

Glad you enjoyed it :)

You raise an interesting point about non-gamers not getting it. I think if someone went in without the knowledge that this was heavily inspired by games and based on a comic there's a good chance they'll be confused by Scott Pilgrim's universe.

To your point about the film's design; I don't think anyone can deny the its unique style and superb battle scenes. I can't see any one coming out of it without at least enjoying those aspects.

I come from a generation weened on video games and computers, but I honestly didn't feel like the movie really related to me as a gamer. Sure, it had a handful of video game references thrown in, but a lot of the references you would only get if you really knew old-school NES games. That would make the target audience late 20's to 30's gamers, right?
Well, there's a problem because we can't relate much to a group of late teens/early 20's hip kids who play in a garage band, struggle with romance, browse record shops for obscure music, etc. That demographic is going to feel alienated by the old video game references because they simply won't understand them without turning to Wikipedia to do the research, which shouldn't need to be done.
On top of all that, the plot of the movie is Kill Bill meets college-aged rom-com.
Despite its flaws, I enjoyed the movie in other aspects such as the direction, cinematography, art style, and music.
I'm also getting tired of Michael Cera playing the same role over and over.

I saw the movie in theaters on a whim because i was bored that night. Turned out to be one of my favorite movies and i just got it for Christmas on bluray! Its a great one!

I first heard of Scott Pilgrim about two years ago when the movie production was first starting. As a big fan of Shaun of the Dead and Hot Fuzz, I took notice when Edgar Wright branched off to direct this.
After reading a bit about what Scott Pilgrim was about, I decided that the movie was going to be awesome and that I needed to read the graphic novels.

The graphic novels were excellent, and made Scott Pilgrim one of my most anticipated movies of last year. I saw it in theaters, and then bought the Blu-Ray when it came out. Worth every penny. Easily one of my favorite movies of last year, and one I will continue watching again and again. And then probably again.

I loved the movie. I saw it in theaters and now we own the Blu-Ray. I was a casual gamer in my youth, played Super Mario on my NES, but I wouldn't say I identified as part of geek culture until I married my incredibly geeky husband.

I knew about the movie before it came out and thought it was totally enjoyable, even though I didn't spend the entirety of my youth chained to a computer or console.

It's great to hear a range of opinions about Scott Pilgrim and that no one I've heard from has given it a thumbs down.

@James
I certainly wish somebody had given it a thumbs down. This film was so super-hyped that I was quite disappointed when I finally saw it (on DVD). Every game reviewer said it was a must-see, and shamed me (not personally) for not seeing it right away.
Oh, there's Zelda noises. That's quaint. I expected 5 times the gaming references. There were more references in the film about the story taking place in Canada!
I will say, however, that I was impressed by all of the comic-book style moments.
As for the topic, I am surprised that you managed to find people amongst your crew who were unfamiliar. The next time I visit the local hang-out for gamers, I'll ask around.