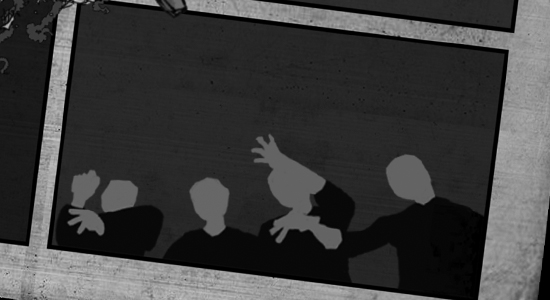 prefer not to check, because information spoils hyperbole, but it seems clear to me that Brendon Chung studied creative filmmaking under Stanley Kubrick during the director's undocumented guest tenure at Brazil's finest, reading shaky Portuguese translations of Bazooka Joe on the bus commute, before a serious dialectical assault at his doctoral defense laid him up for six months in a Sao Paulo hospital that piped nothing but Dick Dale albums into rooms instead of daytime TV.

So it is that Chung's speculatively misnomered Blendo Games has released Atom Zombie Smasher, tower defense derivative in concept but triumphant in style — narrative in paneled non sequiturs, soundtrack in surf guitar.

A vaguely familiar somewhere in mercurial, obscurantist Latin America suffers a zombie outbreak: cause unknown, consequences inarguable. As Chung explains in a brief statement — the kind of disclosure that ought to accompany games more often — we are looking at the two-year-old game's third and finally public version. Part strategic board game, part tactical manager, Atom Zombie Smasher challenges players to target infested territories and stem infection by evacuating the living or permanently interring the undead — either will do. 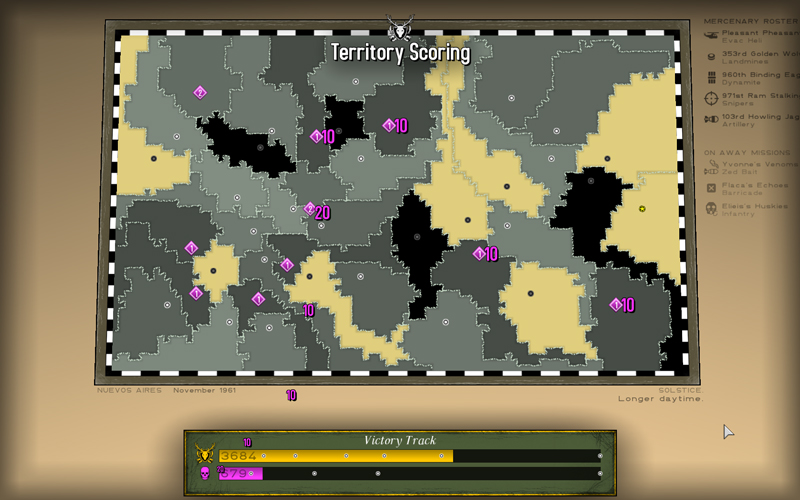 Halt the zombie takeover: there isn't enough room in this country for you, Zed, and your horse.

The brains-craving enemy — "Zed" — enters city blocks laid out in neat rectangles like Pac-Man, streets filled with an unsuspecting, trapped and helpless population. A quota of 10, 20, 30 or 60 citizens must be rescued by a helicopter whose landing zones are selected by point-and-click; alternatively, a player can both stem the onslaught and capture a territory by destroying all active zombies. Citizens run from Zed and follow the bullhorn of a landing chopper, but as the clock ticks, desultory panic and urban congestion leave them vulnerable to being overrun and turned to zombies themselves — especially after sunset, as monsters indeed come out at night.

Players avail themselves to a combination of up to seven basic defenses, represented by contracted mercenary outfits with exotic designations. Some defenses are passive, some are mobile; others require active usage on cooldowns for optimal results. Snipers and infantry can stake out intersections and put down Zed with bullets. Mines and dynamite disintegrate crowds when respectively well-placed and well-timed. Artillery shots flatten zombies, buildings, and — if one is careless — mercenaries. Roadblocks allow a player to funnel zombies into bottlenecks, and baits lure hordes of Zed into crosshairs of any one of the aforementioned.

Mercenary caprice dictates, so players can't choose which of their available defenses to use per round. Subject to the severity of an outbreak and the subtly varying metropolitan grid, they must hold Zed back with each of several, often challenging, combinations. 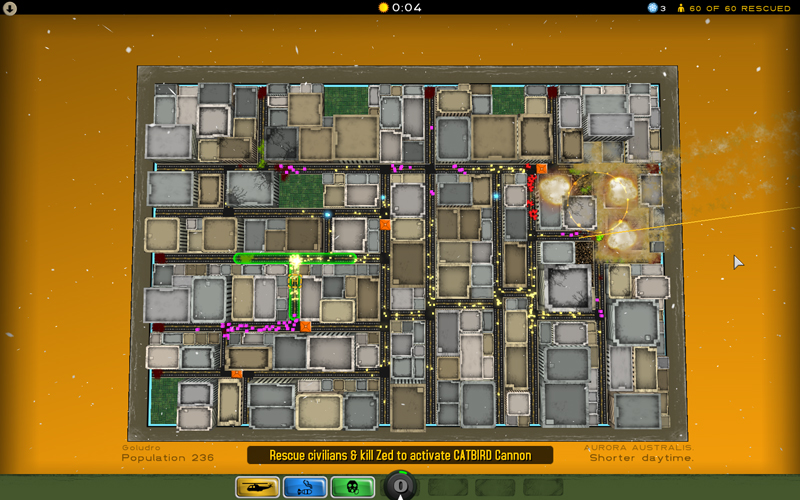 That's where the heart of Atom Zombie Smasher's fun lies, but it's unattainable by the average player using default settings. Yes, right, what's a zombie apocalypse without the fatalism; but tower defense is a light sport, and this game's unadjusted difficulty is hair-pulling. Days are short, Zed is fast; the first city, presumably intended as a simple, instructional level, will result in a new player's first misstep into a lost cause as Zed multiplies.

Settings for additional mercenary groups, complete arsenals and "casual" settings can be selected, but Blendo should have taken the opposite psychological angle by allowing to ease into the game and then think about turning up the heat. Only when I flipped switches did Atom Zombie Smasher turn from vainly onerous to rightfully addictive — though perhaps, however much a man enjoys discharging a mass-driver from space, a little too breezy, so perhaps more tuning could be done.

Brendon Chung et al. define development independence strictly through their originality, the innateness of creating things featuring tempered mechanics dressed in weird charm, so best that some technicalities get sorted out — because Atom Zombie Smasher is fun, and we really do want to keep watching for whatever they dream up next.