World of Warcraft: Cataclysm on Game and Player 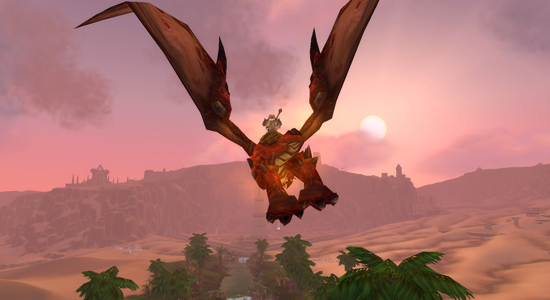 ronic that runaway success would motivate a revision of the beneficent product; for the worse with, say, George Lucas and for the better with Blizzard Entertainment and the third expansion of MMO World of Warcraft, Cataclysm. Invited to battle villains behind a new, primal conflict in new adventures, players are also privy to the comprehensive redesign of a world that defined the game at its original launch six years ago.

Blizzard enjoys the distinction of having spoiled me on roleplaying video games. Since I began playing World of Warcraft regularly in the fall of 2008, every remotely competitive title has proven lacking in breadth, brevity or charm. Fallout 3 drew me in — but the game's quests were often protracted and its grim milieu left me unsettled when my intention was to relax. Dragon Age offered beautiful landscapes (so long as I didn't stray from a narrow path) and compelling gameplay (so long as I didn't mind unsympathetic characters).

I'm not sure, exactly, what it is about Blizzard's MMO that retains my interest. A seamless, oil-painted world with dozens of lands manifesting every clime and mood imaginable? Easily completed quests assembled along a monumental arc of more than 80 levels, meeting both instant and invested gratification? Group challenges at maximum level approaching a standard of skill and cooperation demanded of sporting teams? Whatever the combination, Blizzard has my eleven-odd dollars monthly alongside millions of others'.

What's behind Greymane Wall? Blizzard has used the expansion to advance plots left untouched since 2004.

It wasn't this way at first. One year earlier, in fact — October 2007 — editors Ed Kirchgnessner, Jeremy Steeves and I opened trial accounts. I found World of Warcraft unique — but by no means indispensable. After a month, I stopped playing — amused, curiosity sated — with no intention to resume. Blizzard recently divulged the fracture line between subscribers and dabblers; a stunningly introductory level, around 10 or 15.

Anecdotally, another disjuncture between current and former players occurred between the levels of 30 and 60. In 2004, Level 60 was endgame, the point at which progression is no longer measured in experience points but weapons and armor allowing a character to join groups and challenge increasingly complex dungeon encounters. In another cathartic statement uttered these last months, one of Blizzard's designers recounted the vision at the time — advancing to the pinnacle of heroism should entail Homeric journeys from opposite tips of continents. Practically, it meant longer and longer hours between achievements, as well as the accompanying boredom; perhaps, too, departure.

Expansions in January 2007 (The Burning Crusade) and November 2008 (Wrath of the Lich King) not only contradicted this philosophy with centralized quest structures that packaged fantasy into efficient but entertaining routines of slaying beasts, collecting items or playing courier between NPCs — it thrust this range into sharp relief as a kind of sailing through a lull. This, along with other vestiges, was swept away when Blizzard acknowledged in Cataclysm what World of Warcraft has become: a manifold, arcade-like RPG; with airtight mechanics and formulaic quests providing a lighthearted simplicity for casual players independent of a statistic-driven depth craved by hardcore players.

More pointedly, in World of Warcraft, players value their ability to level and regularly play not one character, but several — up to ten on a realm server, one for every class.

Although the purchase of Cataclysm — retailing at forty dollars — isn't necessary to play through the first 60 levels, or the "Old World," Blizzard's changes are inextricable from the expansion.

Character development: whole zones center on the adventures of a small group of NPCs.From the expository cutscene following character creation, the game is notably different from what had remained largely static since 2004 — Blizzard has capitalized on the worldwide catastrophe to advance plots left untouched. Four of the original playable races — humans, dwarves, orcs and undead — have progressed and adapted to the life and times after the defeat of the Lich King, with new quests and questlines to show for it. Gnomes and trolls — each race with its own diaspora adopted by the respective Alliance and Horde factions — have reclaimed their homes, the irredentism resulting in entirely new zones, as well. Two new races, the goblins and lycanthropic worgen, boast Blizzard's finest work, with evolving, interactive environments and cinematic cutscenes unraveling a single dramatic narrative.

Narratives mark the most significant change to questing. Yes, in the past there was an overarching story, but it was hard to pick up merely from interstices between discrete — even disconnected — batches of contracts provided by the dozens and dozens of NPCs in need of heroes' work. Players would move methodically from one location to the next — more seamlessly from Burning Crusade on — accepting, pursuing and then completing quests. Some adventures were memorable; some NPCs, too; to all but the most eidetic bookworms, most weren't. Now, whole zones in the Old World — perhaps some thirty to forty quests — center on the adventures of a small group of NPCs, sometimes a single one.

The effect is immersive, even more so in high-level zones added for Cataclysm — to effective and deleterious ends. Uldum, an arid, oasis-pocked land steeped in a knockoff of Egyptian mythology and profiting from borrowed interest from Raiders of the Lost Ark, stands — for me — as the most captivating, rewarding experiences I have ever had in the principally single-player aspect of the game. There are only a handful of quest-givers — the Ramkahen king, his brother, the boy-strategist Salhet; one Harrison Jones, his compatriot Sullah; and their nemesis, the guileful Schnottz. Compare that to the Twilight Highlands, putatively Cataclysm's culminative zone, yet a fractured array of half-stories told through fetch-quests for a dizzying cast of NPCs whose names I honestly and demonstrably can't recall.

The land of Uldum stands as the most captivating, rewarding questing experiences I have ever had in the game.Alongside a few steps backward in design, there is some unevenness in production, especially of the newer generation of cutscenes — some feature voice-acting, others don't; some zones have conspicuously more than others, and longer ones at that. Furthermore, Blizzard isn't terribly good at teleplay — Wrath's Minas Tirith-style face-off actually ending with the Lich King sputtering "This isn't over!" — so the grave, high-fantasy stuff flirts with insipidity. To be fair, that such a massive game as World of Warcraft could be furnished by such a comparatively intimate team as Blizzard's is reason to give some slack.

And, too, in some justifiable respects, leveling and questing are means to an end. Gameplay mechanics, especially character classes, are defined by the intensely competitive and zero-sum endeavors of player-versus-environment dungeon-crawling (or "raiding") and player-versus-player battlegrounds. Each of the ten classes has three specialty trees with roughly forty talents adding, increasing or modifying skills or powers. Most of us remember a time when we dropped a talent point in this tree or that — innocent of how the game is actually played. Evolving design has led Blizzard to limn the thirty specialties as singular choices, limiting options outside of a talent tree but granting the signature ability of each specialization as early as Level 10, so players can immediately and tangibly evaluate it all for themselves.

Class progression, level by level, has been made welcomingly plain. Blizzard's developers may pride themselves on simple-but-complex rules accessible to novices while stimulating heated debates among mathematicians, but until Cataclysm, a majority of useful, current information on character classes could only be found on third-party websites or between players on official game forums — but not from the developers themselves.

Environments are immersive, especially in high-level zones added for Cataclysm.Now, when characters gain a level, players are immediately informed what they've gained. As with quests, obsolete clutter like ranked spells have been removed and onerous goose-chases to learn an ability have been deprecated to optional at the very least. Finally, the automated matchmaking Looking for Dungeon system, introduced last year but tailor-made for the revitalized game, allows players to easily take their first steps into the competitive play that has many — including myself — diving into the expansion.

As for that dimension of the game, my time participating in this summer and fall's beta and first-week blitz with my guild proved that dungeon-crawling and raiding will reach back to the more complicated, challenging encounters of years past — before Wrath of the Lich King streamlined many battles to resemble beat-'em-ups — without being totally and unquestioningly atavistic. In fact, Wrath's faster pace necessitated gameplay mechanics elevating the most high-profile encounters to the point of formidable, 25-man choreography. So far, my guildmates and I like what we see.

Millions of other players are enjoying their own view, too — of varying scenery. In an interview with the Guardian, Blizzard's chief project manager J Allen Brack flourished his new title's features with the assurance that "Different players will be interested in different sorts of things." What underwrites World of Warcraft's longevity is its presence as more than mere game; like the bar and billiards, pub, roller derby or golf house, it is a place — however virtual — to unwind, interact, team up and achieve, the essence of an MMO. Six years on, it embraces Cataclysm's creative destruction, removing all doubt of six years more.