Harm's Way on Game and Player 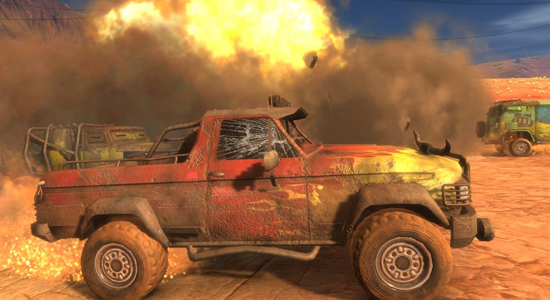 s fun as it is, the first Doritos-sponsored game Doritos Crash Course presented a simple yet not so original concept. The second and final title of the promotion named Harms Way is very much the opposite in these respects though it remains as almost engaging and feature-rich.

It takes two genres that to my knowledge have never overlapped: racing and tower defense. In this multiplayer-focused fusion the goal is to ensure that your team's vehicle places highest in a series of desert-based off-road races. Each side is comprised of two players, one competing in the race itself and another jumping between gun turrets stationed around the map.

The latter's job is to support their racer by destroying or delaying the other race participants with a variety of weaponry and traps conducted. This is conducted from a first-person perspective, transporting between the different turrets with the touch of a button.

Drivers have no means to attack one another but they do have a number of power-ups at their disposal. These pickups are scattered at various points on the track Mario Kart-style, and include a temporary defensive shield and a nitrous upgrade for a brief burst of speed. Perhaps the most crucial ones, though, are the turret upgrade and downgrade items, which serve to add to your team's turret arsenal or take one away from your competitors. If you want to help your gunner to help you, you'll want to make sure that you pick up at least one of these modifiers per race.

All's fair in love, war, and off-road racing: the most crucial power-ups are the turret upgrade and downgrade items.

Handling and controls aren't as polished as your triple-A boxed racers like Need for Speed: Hot Pursuit< or Motorstorm: Pacific Rift but they come surprisingly close. Everything here is at least responsive and satisfying enough to be fun even in spite of the occasional physics-based oddity like getting stuck in map geometry.

Its presentation again isn't going to challenge Harm's Way's big budget competition but is still surprisingly good for an Xbox Live Arcade title. The environments and vehicles look solid largely thanks to its detailed textures not to mention some above average particle and explosion effects adding to the atmosphere. The sound effects do a similarly good job of bringing the action to life, though the lone race commentator who sounds like he's broadcasting over ham radio is a little cheesy and repetitive.

Much like Crash Course, Harm's Way has a full suite of multiplayer options. Four players can play split-screen and the full eight can play via Xbox Live or even System Link. Split-screen and LAN support seem to be on the wane in console games these days so it's a particular boon for the likes of Harm's Way to feature them.

Sadly, there aren't that many people playing the game online but thankfully you can fill up the empty player slots with some competent AI-controlled bots. There is also a strictly solo single-player mode, though this seems like a thrown-together afterthought. It lacks the team-based play and therefore the hook of the game, making the gunner role pointless, as they can't actually win. If you want to play with the full and correct rules when playing alone you'll need to go through the multiplayer menu and choose to create a split-screen match, whereupon the game will fill the remaining player slots with AI racers and gunners.

In the end, Harm's Way is an ambitious game particularly for a downloadable title. While this direction results in a less polished and focused end product than Doritos Crash Course it's most definitely worth checking out, especially given its nonexistent price tag. I do feel like this concept has a lot of untapped potential though — let's hope that we'll see a big budget Harm's Way grace the gaming circuit some day.

Editor's Note: The apparent official title of this game, Harms Way [sic], has been altered in this article for the sake of grammatical correctness.