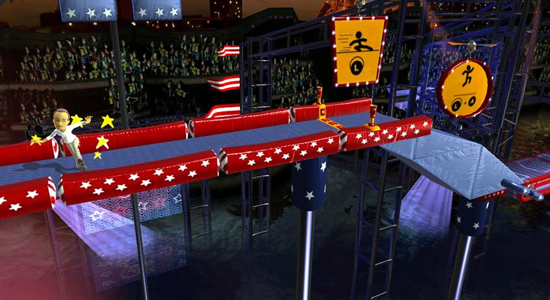 s part of a promotion with Doritos, two new and completely free Xbox Live Arcade games have just been released. The first is brought to us by Behaviour Interactive, the recently renamed Canadian developer responsible for Naughty Bear and WET.

Named Doritos Crash Course, the game clearly takes inspiration from extreme TV game shows like Wipeout and Takeshi's Castle where contestants have to traverse a gauntlet of platforms, conveyor belts, swinging hammers and more to reach a final end zone. While video game adaptations of such shows are nothing new, Crash Course might just be the new best in its class.

The classic platformer: go left to right running, jumping, climbing, ducking and sliding your way towards the goal.

The basics are as simple as any 2D platformer. You move from left to right running, jumping, climbing, ducking and sliding your way towards the goal. But as any fan of platformers will attest, physics and controls can make or break the experience. Crash Course absolutely nails this aspect, delivering cartoony yet responsive handling that strikes a great balance between fun and skill.

Sure you'll go plummeting off the stage and into the water many times over the course of the game, but this'll mainly be due to some fiendish level design later on. Smart use of checkpoints and a feature that allows players to skip sections that they're having trouble with (similar to Nintendo's Super Guide function) means the game rarely becomes frustrating though.

Crash Course's fifteen stages are broken down through three worlds themed around the USA, Europe and Japan, scaling in size and complexity over the course of the game. Though I managed to race through all of them in two short sessions of play each has a gold medal high score that can be beaten. Multiplayer also boosts the lasting appeal, allowing up to four players to compete locally or online. The game also features online leaderboards plus the usual two hundred achievement points for gamerscore fans to unlock.

Delightful animations succeed in bringing the avatars to life.All things considered, there aren't many titles that make use of the Xbox 360's avatar system but Crash Course is definitely one of the best at doing so. On a basic level it functions as you'd expect, with your in-game character automatically assuming the look of your Dashboard-created avatar.

But what makes this special here is the delightful animation, which succeeds in bringing the avatars to life. Everything from the post-victory celebrations, the ways in which your character can get knocked out to even the basic running animations are fluidly rendered yet brilliantly cartoony. I couldn't help but laugh out loud at times, like when I first watched my digital self wipe out, his arms frantically pinwheeling as he plummeted toward the water below.

Those concerned about being bombarded with promotion for Doritos in Crash Course needn't worry. Aside from the brand being in the game's title there isn't a trace of advertising for the savory snack here. Given the circumstances of the game's creation the developers could've easily featured a few Doritos billboards in the backgrounds of the levels and people wouldn't have minded.

Doritos Crash Course succeeds in combining the wacky spirit of the game shows it's based around and the satisfying game play of the likes of Super Mario Bros. Some might complain that it's a little one-note but to those I'd argue that it sticks with one thing and does it extremely well. I'd also reiterate the fact that it's completely free and substantially higher quality than a lot of paid for content on Xbox Live Marketplace.

I tend to enjoy these kinds of games, like Trials HD or Canabalt on iPhone (or even Marble Blast maybe?), and you can't go wrong with free, so I'll definitely be downloading this when I get home.

There really isn't a trace of Doritos placement. There isn't even a crumb!
I think I want to play this one online, but I can never find anybody.
I daresay I have not seen such quality free content on XBLA since 1 vs 100.