Rock Band 3 on Game and Player 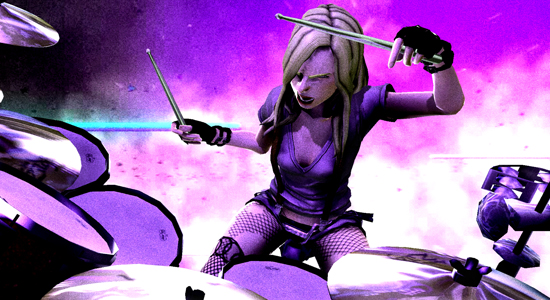 Party game, proficient teaching tool, and rock 'n' roll fantasy all in one.

ock Band 3 has garnered exceptionally high praise from game critics with words like "landmark" and "perfect" cropping again and again in its reviews. Rightly so, since Harmonix's latest is undoubtedly the biggest leap forward in the rhythm action genre since the original Rock Band introduced drums and vocal game play.

The game brings to the table a brand new instrument, the keyboard. With the new twenty-five-key controller or any MIDI-compatible keyboard, you or a bandmate can now tickle the ivories.

It plays as you'd expect, which is to say, excellently. If you've played the guitar parts in Rock Ban or Guitar Hero you'll know what to get out of playing on the standard level of keyboard — hit the appropriate keys in time with the matching colored gems on-screen to play your part in the song. Given that only five keys are required here, most will find this pretty breezy. Only in Pro Mode, where the play expands to encompass every key, does the instrument come into its own.

I can report that the official controller is of a high quality and can be used as a MIDI keyboard, too. It's worth noting that not all of the tracks that ship with Rock Band 3 have keyboard parts (none of the previously released DLC songs have them either for obvious reasons) — but don't fret, the controller can also used to play the lead and bass guitar parts, keytar-style. It retails for slightly more than the standard guitar controllers (around £70/$80) but given this flexibility it comes highly recommended.

Just as significant in Rock Band 3's rejuvenation of the genre is the complete redesign of the game's structure.

Many have scoffed at players "wasting" their time and energy with rhythm games instead of learning to play the actual instruments. To that end, Rock Band 3's new Pro Mode aims to teach players how to perform the included songs for real.

While I've only had the chance to play Pro Mode on the keyboard and drums (the new controller required to play Pro guitar has not yet been released) I can say that it is both difficult and satisfying in that way traditional instrument learning is.

The one gripe with the mode is that the game teaches you with its own language of colored gems — the onus of learning to read and perform from real tablature remains with the player. Still, the developer claims that playing Pro Mode on expert difficulty directly translates to performing the actual songs. Currently I'm nowhere near good enough to confirm this, but one day I'm hoping the game will have me sufficiently trained up to be able to perform John Lennon's "Imagine" for real. I'll keep you posted.

Though Pro Mode and keyboard play might be the big bullet points on the back of the box, just as significant in Rock Band 3's rejuvenation of the genre is the complete redesign of the game's structure.

You still start out by creating your characters and band but the way you progress is very different. Your progression is no longer solely defined by just a career mode since almost everything you do in the game now builds your fan base, essentially your band's experience points. A new goal system underscores everything, rewarding you with bonus fans and unlocks from the band shop upon completing specific challenges or reaching significant milestones.

Also noteworthy is the menu revamp that greatly simplifies playing in groups. Each player can now bring up their own unobtrusive pop up menu allowing them to edit their settings and change characters at any point outside of game play. Here profiles can be instantaneously swapped between instruments, thankfully banishing the lengthy process of signing players in and out to be able to change instruments.

With the new twenty-five-key controller or any MIDI-compatible keyboard, you or a bandmate can now tickle the ivories. But is this truly rhythm game perfection? Not quite. There's only one identifiable problem with the game but it's a significant one for big groups of players. Due to the Xbox 360's limit of four active controllers, Harmonix had to find a workaround to allow for the maximum of all four instruments and three microphones to be used.

As a result, the developers implemented All Instruments Mode, which blocks any singers from signing into their profiles but continues to let up to three people croon on microphones. As you'd expect this prevents said players making further progress towards their careers and achievements, but to add insult to injury they're also forced to play on easy mode and lose the abilities to utilize Overdrive power and view their individual scores.

The PlayStation 3 version — despite the console being able to support seven controllers — suffers from the same problem. Though it would have meant additional work for the developers to implement full controller support here, PS3 players will probably feel marginalised by this.

As if this wasn't annoying enough, for some reason the game doesn't allow a keyboard, bass, lead and microphone combination, forcing All Instruments Mode despite the spare slot left by the drums. I might be missing something here, but I fail to see the logic behind this restriction.

While it's alarming that I haven't come across a single review that has addressed these issues, they ultimately don't drag down the experience much. After all, I'm pretty sure this is the first and only rhythm game to have a seven-player function, even if it isn't quite as fully fledged as it could have been.

So it might not be perfect but Rock Band 3 is truly the new standard in the rhythm action genre. And given that all your downloaded songs and the majority of the on-disc tracks from previous Rock Band games can be used with it, the amount of available content here is staggering.

It's a fantastic party game, a proficient teaching tool, and a rock 'n' roll fantasy all in one — a serious contender for game of the year.

I just played Rock Band 3 for the first time last night at a friend's house. The set list was brilliant, the interface changes were (mostly) huge improvements and I love the fact that now a single created character can play every instrument in the game (no more guitarist named Ed, vocalist named Edward, drummer named Eddie... you get the idea).

I wasn't able to try out the keyboard controller yet, but I'll definitely be picking up this package sometime in the coming months. Well done, Harmonix, and an awesome party game indeed !

I was also annoyed by having to be in All Instruments mode when using keys, guitar and bass but overall, I love the game.

Hopefully they can fix up some of those little annoyances in RB4.