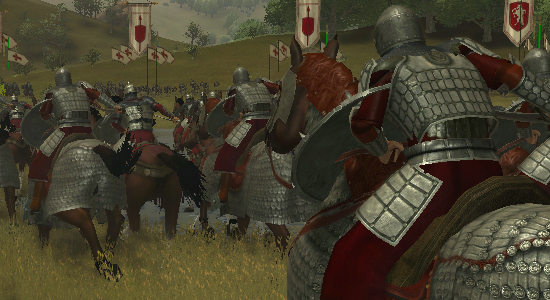 aha ad-Din Ibn Shaddad earned his adjutancy to Saladin because he was both loyal and honest: when the servant writes about the Ayyubid sultan and his reign, you pay attention. Second only to Saladin in ad-Din's chronicles is the Third Crusade and its Western principal, King Richard I — the Lionheart. The English king, ad-Din recorded, "was a very powerful man among the Franks, a man of great courage and spirit. . . . His arrival put fear into the hearts of Muslims, but the Sultan met the panic with firmness and faith in God, consecrating all his actions to Him and dedicating to Him his sincere intention of fighting in the Holy War."

Lionheart: Kings' Crusade — the latest effort of developer Neocore Games to transpose the generational wars of the Crusades into real-time strategy — pits a complacent Western kingdom's renewed zeal and its daring, flamboyant champion against Muslim emirs and tribes finally united under warrior whose ascetic character embodied the very stuff of chivalry. Trading instant gratification for depth and historical detail, Lionheart may seem ponderous next to the swift pace of Starcraft but strikes a fair balance between the value of acting quickly and planning intelligently.

An interview with Neocore allowed me the rare opportunity to compare designers' intent with the practical success of a final release.

Although the First Crusade established the Western paradigm for holy war, and was the only campaign to end with an expansion of European kingdoms, we tend to remember the Third Crusade the most. What inspired Neocore?

We love to explore legendary times in history and telling stories about knights and great challenges. We also enjoy toying with the ideas of alternative realities and what may have happened if certain decisions were made differently which, in turn, led to the idea of Richard the Lionheart taking the Holy City and the entire Middle East. It was a great dream in the past but it has never become a reality until now. Needless to say, we just love making games about heroic deeds and this is exactly what Lionheart: Kings' Crusade offers by presenting the great heroes of the era — Richard the Lionheart and Saladin.

There are three single-player options; two for commanding each side in a fictional campaign for control of the Levant and greater Near East, and a third providing individual scenarios in which everything from the size, composition and resources of an army can be tailored to one's liking.

While Lionheart's fidelity to the era deprives a commander's ultimate goal of any real subtlety — behind the religious zeal was a very practical desire for power — his available means are very complex, and reflect production values startling for a minor release. Prior to the start of battles, an advisor — expertly voiced by an equally vivid cast of actors — lays out a series of goals precisely marked on a mini-map, complete with animations of predicted enemy and allied movements, and a three-dimensional survey of key points on the field.

Players of the Crusader armies will be subject to a facet of gameplay Neocore calls "strategic management." Representatives from four European powers — the Holy Roman Empire, King Philip of France, the Knights Templar and the Papacy — offer distinct plans of attack according to their strategic preference and local, ulterior motives. Unlike recent Paradox release Commander: Conquest of the Americas, implementation of rival and contradictory oversight is seamless, essentially four perspectives on an engagement coming straight from the developers, and favoring one faction over the other is never a source of frustration.

How do the forces differ from one another in composition and tactics? What about their respective leaders' goals?

The Crusader and Saracen armies have totally different unit types that require different tactics. For example, the Saracen army has more units but with light armor so players will have to be more tactical (e.g., changing formations, using special unit abilities or using terrain) to be victorious.

On the battlefield, both armies will use the terrain in different ways. The Crusader army will have many heavy, armored units, which can give them a hard time if they are forced to fight on hard terrain such as the desert, since heavy cavalry recovers stamina in the desert much more slowly.

On the other hand, the Saracen army has to avoid direct confrontation and force the opposing army to clash with them on hard terrain where they'll have a huge advantage. As for their goals: to conquer the Holy Land and the Middle East and gain full control over these territories.

There are some tricks to using the land in your favor but in practice, victory depends more on superior forces and sensible formations. Every unit type, derived from a historical example, is fit to engage, but the lunge and riposte of military science took place even in the Middle Ages: it pays to know when and against whom to deploy your forces.

Units can be customized and improved in no less than four categories.Rank-and-file infantry are inexpensive and ably complementary, but lack speed, prowess and dedication; surpassed by each side's professional soldiers, as well as members of the Christian martial holy orders. Archers match accounts: powerful at range, imperiled when rushed and forced to fight hand-to-hand. Saracens enjoy the cultural product of nimble, mare-mounted bowmen, while the distinctly Gallic invention of heavy cavalry underscores Europe's mechanical affinity.

Greater numbers don't mean as much as the quality of soldiers — experienced, highly motivated and heavily armed troops can ably defend against or slice through an army that is tired, hungry, and ill-equipped. As a result, the game's wealth of customization features is welcome to players eager to advance.

Lionheart isn't a strictly historical interpretation. With gameplay elements such as potions and holy relics, you've embraced a mystical sensibility, captured especially by chroniclers of the day.

It is important to note that Lionheart is mostly still a historically authentic game and offers a kind of alternative history of what could have happened — the names, locations, weaponry, combat tactics, and descriptions are historically authentic. The first part of the Crusader campaign also covers real historical events. We did use some elements people in that era considered mystical though, such as holy relics, and certainly we had to be very careful with these, always keeping in mind what skills or effects were realistic and which ones were too fantastic. The main point of using holy relics in those days was because people believed the items had power from God; therefore the army fought with the belief that they were fighting for their God.

There are also some special leadership and unit skills — like a true leader can put hope into the heart of his soldiers, units can drive themselves into overcoming seemingly impossible deeds when it's really needed, or archers can fire flaming arrows. As you said, we also have — for want of better words — potions and elixirs in the game, but don't mistake them for magical items! These items are more like the secret tinctures and special ointments of the monks and healers and increase unit strength so soldiers can deal more damage, fight faster, and more.

Units can be customized and improved in no less than four categories. Money buys training, increasing attack or defense bonuses slightly. Spoils of war, such as special weapons, potions or the rarer vade mecum, may be given to a unit, granting it both single-use, temporary and permanent combat bonuses.

A few trivial annoyances do nothing to diminish the grandness or luster of battles.Hirelings further augment a unit's capability — and with that, its survivability, allowing experience points earned in combat to be used for nearly a dozen passive and active perks, ranging from skill in evasion for timely retreats to mitigation of penalties, and even a few specializations resulting in considerable trade-offs.

Armies themselves grow stronger through the selection of Feats of Leadership, Unit Upgrades and General Upgrades. Similar to talent trees, these arrays of bonuses and new units may be purchased with points and money earned from battlefield triumphs. With such a weighty proportion of choices to currency, each playthrough can see deep investments with very different focuses.

Although in-game clashes physically devolve into disparate masses of warring men, and the responsiveness of units to micromanagement is occasionally slow or contradictory, the use of special abilities and sound tactics are easy enough; their effects visible and timely. A few other trivial annoyances, such as longish load times and a brief screen-freeze every now and then, do nothing to diminish the grandness or luster of battles.

"All they have done," Saladin is written to have said of the Franks on the eve of the Third Crusade, "has been done purely out of zeal for Him they worship, in jealous defense of their faith." As for his own subjects, "This is the moment to cast off lethargy, to summon from far and near all those men who have blood in their veins." Two indomitable leaders, a monumental collision: Neocore understands this confluence of might and majesty.

My cousin recommended this blog and she was totally right keep up the fantastic work!