Fido 2.0 on Game and Player 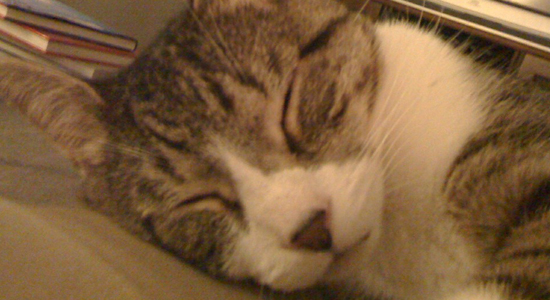 In search of the "perfect" virtual pet.

yelled at my dog once. It was completely by accident — I meant to tap the “play” emoticon, but instead hit right on the d-pad. He whimpered, scampered a little further off with his tail between his legs and I was left feeling awful. Fable II's portrayal of the animal companion was by no means perfect, but what virtual pet could be perfect?

While Agro did so much to further the role of animals in games...

Just last week, I adopted my first cat — a shorthaired grey tabby that answers to the name Toby. Much like my unnamed pooch in Fable II, Toby loves to play, bound about and receive the occasional treat. Of course, there isn't a d-pad with substandard tap detection to get in the way of our relationship. Toby has no problem sensing when I'm proud of him — a soft touch and some kind words from me are all he needs.

Historically, there's a lot missing from the virtual pet/human connection. A whole lot, actually, what with the general lack of fuzziness, warmth and emotions, but that's beside the point. No, what's missing is an interface that works.

Can't animals be more than vehicles and extra storage slots?A few game developers have come close. Anyone who's played Shadow of the Colossus probably knows where I'm going with this. Agro, the trusty steed of that game's protagonist, was the first videogame horse to actually behave like a horse. The controls were more about coaxing than driving — as such, Agro was somewhat self-sufficient. You nudged her in a direction, spurred her to action and the rest was up to her. While Link's Epona was a fine enough way to travel across Hyrule, Agro transcended “means of conveyance” and actually became a character. As a gamer, I can actually say I enjoyed the time I spent with that horse.

Let's contrast that experience with the dragon riding “fun” of Lair. Here, the player's mount was completely devoid of soul and was further hindered by one of the worst control schemes to ever grace a console flight game. From its inception it seems, Lair was about “driving” a dragon, not about “flying upon” a dragon. As such, players were returned to the norm whereby animals are merely vehicles or a supplemental backpack.

...Epona seems doomed to remain little more than a car with four legs.It's clear that some developers would like to expand upon the traditional role of the animal companion in video games, but no one has yet to really hit the mark. Fable II's hound was a fantastic addition, but I hope that Fable III's will be a bit more self-sufficient and, perhaps, a bit less obedient. In Fable II, the actions of praising or scolding your pooch seemed little more than window dressing. What if in Fable III, one's training technique played a larger role in shaping the behavior and obedience of one's companion animal?

Right now, Toby is slowly mastering the “art” of using his scratching post. It's slow going, requiring a lot of positive reinforcement on my part, but he's already showing some progress and the end result will make both of our hard work worthwhile. This is the sort of rewarding interaction I'd like to see more of in video games — while some developers have succeeded at control and others at providing virtual pets with entertaining (if not believable) AI, the time has come for someone to provide players with the complete package. While a virtual pet could never take the place of the furry companions that share homes with so many gamers, improving them can do nothing but heighten our enjoyment of the pastime.

This just makes me want to play EyePet and see how awkward it is.