Duty Calls on Game and Player 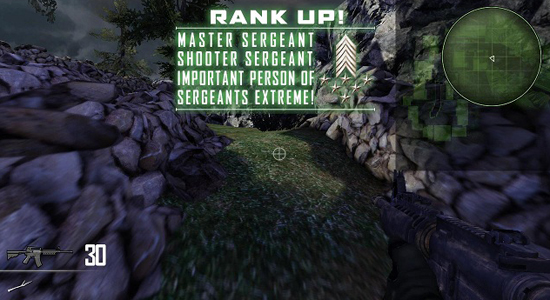 t’s nothing new to see a video game developer taking to the soapbox to profess why their game is the best and why the competition’s game isn’t. But this week, People Can Fly, the developers of the upcoming shooter Bulletstorm took this marketing strategy to new heights. Their downloadable PC game Duty Calls holds nothing sacred as it utterly tears apart Activision’s Call of Duty franchise. Is it over the top? Yeah, but it’s also absolutely hysterical.

I’ve been pretty vocal over the past few years, expressing my disdain for Modern Warfare’s single-player campaigns. It’s as if the games’ scripts were written by thirty-year-old G.I. Joe fans who still thought the program was an example of “high drama.” As well designed as the Modern Warfare games' multiplayer modes are, their campaign storylines feature some of the most offensive portrayals of modern fighting forces to ever grace the small screen.

So back to Duty Calls: this is one imitation that isn’t in the least bit flattering. While I’m certain the folks at People Can Fly will take a bit of flak for so mercilessly ribbing their peers, the fact remains — if a product doesn’t innovate or bring anything new to the table, is it really worth making? It’s certainly in Activision’s best interest to churn out a new CoD every year, but what about the industry as a whole? As a thirty-year-old who can no longer even watch G.I. Joe ironically, I can attest: it’s not the number of presents under the tree that counts.

Be sure to download Duty Calls, or at the very least, check out some gameplay videos. Then, share your thoughts in the comments section below.

As thrown gauntlets go, well-deserved and well-done. Can we see a series of parodic titles?

That, and any reference to the nuclear missile bomb.

I don't care for Call of Duty, single- or multi-player, but the Chernobyl sniper missions in the original Modern Warfare were brilliant. The frantic darting from cover to cover, crawling under trucks, hiding in the long grass, etc. stands out as one of my most memorable moments in a videogame ever.

I am sure the scenario is highly scripted and not as dangerous as it seems when first experienced, but it was awesome nonetheless -- a spectacular illusion. I haven't played a Call of Duty since then, and so I have little idea of what has happened in the meantime.