Eurogamer Expo 2010: The Games on Game and Player 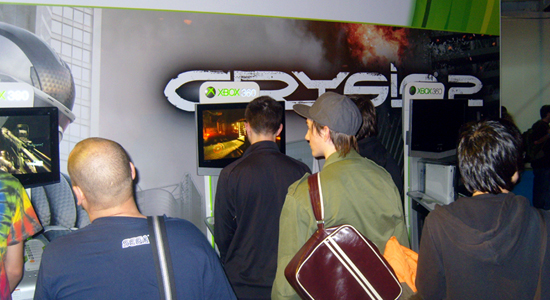 A hands- and eyes-on with the future of gaming.

east mode was the showcase feature of Gears of War 3 at the Expo. Picture Gears of War 2's Horde mode but from the perspective of the evil Locust and you've got a pretty good idea of what to expect. Players now assume the role of the beasties sending in wave upon wave of forces against a finite number of humans. To prevent this from being a one-sided conflict the Locust are weaker than their opponents and usually start at a disadvantage location-wise. Also, when a player respawns it depletes some of the team's reserve of tokens, and should these run out entirely the game will end in failure.

Tactical use of the different Locust species is a must when trying to take out the humans using as few tokens as possible. Though the spawn selection screen looked like it had enough options to encompass more species than we've seen so far in the Gears series, I was only given access to three of them. Tickers, scurrying suicide bombers, are fast but take very little damage to kill. Wretches present a balanced unit that are small and can make use of cover. Butchers are hulking, easy targets but are deadly at close range.

Beast looks to be less intense than Horde due to death not being as big a punishment but at the same time it seems a lot more varied and tactical. I'm really looking forward to fully experiencing it when Gears of War 3 launches next year.

New twists make Donkey Kong Country Returns one title platform fans can look forward to.Gaming's favorite simians are back in Donkey Kong Country Returns and this time they've come with differing abilities. Diddy Kong now gets to wield his Donkey Kong 64-inspired rocket pack that lets him hover through the air while Donkey has a powerful ground pound move. When playing the game solo Diddy jumps on DK's back and they become a single playable entity able to use both sets of abilities. All in all, these new twists on the classic 16-bit games make DKCR one title platform fans can look forward to.

Another returning Nintendo franchise looks to have even more drastic changes. While Kirby's Epic Yarn may still be a 2D side-scroller, it shares very few basic mechanics to its predecessors. Gone are our pink pal's traditional abilities such as floating like a balloon and eating enemies, instead replaced by a new tether ability. With it he can whip across pitfalls Indiana-Jones-style, lasso enemies and items to use as projectiles and crease the fabric of the world to close up gaps between platforms. The yarn motif may be twee but it looks to provide some imaginative new experiences.

Crysis 2 should have been a major attraction on the show floor given its predecessor's reputation as a graphical showcase. Conversely, it put in a very disappointing showing thanks to a highly unstable Xbox 360 build featuring an extremely jerky frame rate and a heinous amount of short-range texture pop-in. While you'd expect a great developer like Crytek to have these issues ironed out by release, it begs the question of why preview the game in such a state?

Crysis 2 should have been a major attraction on the show floor but put in a very disappointing showing thanks to a highly unstable Xbox 360 build.Though most of the games present with Move support were already on general release, I made a point to try out Sony's Wii contender. I stepped up to the plate in Sports Champion's gladiator mode, wielding my two remotes like a sword and shield as instructed. However it didn't work as I'd hoped. The game wasn't great at informing me if I had successfully blocked my opponent's attack and I couldn't consistently initiate strikes of my own despite my best efforts. My two matches both devolved into frantic remote waggling with luck winning out rather than skill. Perhaps there was a calibration problem or some other issue at work, but I walked away disappointed.

While I didn't go hands-on with Killzone 3, I did make a point to see it in 3D. The action did indeed look three-dimensional but as with my time with James Cameron's Avatar everything was too lacking in definition for my liking. To make sure it wasn't my substandard eyesight affecting the results I even sat within a metre of the screen but these issues persisted.

Fable III's grand underpinnings of revolution were hard to spot in small portions of the game available to play. In fact at a glance everything looked decidedly similar to Fable II, man's best friend included. Upon taking a quest, however, the new relationship system became evident. By standing in front of an NPC and pulling the right trigger you're able to see the status of your relationship with that character. You can change your standing with the people of the world by completing such quests for them or performing certain social interactions. If lead designer Peter Molyneux is to be believed, your relationships with the citizens of Albion will be a crucial factor later in the game.

Look for more on Fable III in my upcoming report on the Peter Molyneux's developer session.