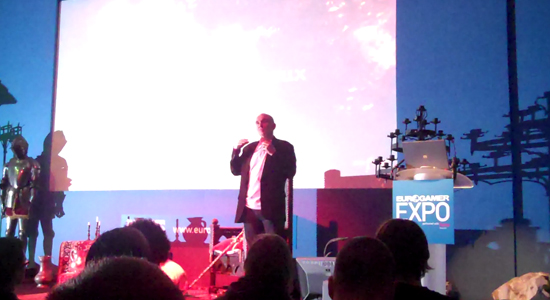 The lead designer of Fable III takes us through the franchise's history.

very year the Eurogamer Expo hosts various developer presentations, allowing the creative minds behind the games to discuss and promote their current projects. The first and arguably highest profile developer sessions this year was Peter Molyneux's. Creative Director of Microsoft Game Studios Europe and one of Britain's most prolific and famous game designers, he took to the stage ahead of the release of his latest venture, Fable III.

After the attendees had taken their seats in front of the stage filled with medieval adornments like a suit of armour and a water well, two actors dressed as Fable bandits began a staged sword fight. This awkward and unconvincing display gave way to an authentic looking and sounding town crier who bellowed the introduction to a brief Fable retrospective video and then Peter Molyneux himself.

For the bulk of the presentation Molyneux spoke about the history of the Fable series. He cited its genesis as a series of brainstorming sessions he shared in 1997 with Bullfrog Productions colleagues Simon and Dene Carter while they were developing the original Dungeon Keeper. In 1998, the trio began preliminary work on a PC version of Fable though the finished game would not see the light of day until 2004 on the Xbox and PC.

At this point in the presentation Molyneux began to specifically highlight the key inspirations between him and other Fable designers. He cited several English folk tales and myths that are easy to identify in the finished games like that of the legends of King Arthur and Robin Hood.

But he also pinpointed some more surprising influences. The fight scenes in the movie Kill Bill greatly impressed the design team, with Molyneux likening the action to the sort found in fighting games. He admitted to loving the likes of Street Fighter but was never good enough to be able to pull off the more spectacular moves. These inspirations led to the simple but grand one-button combat in the games.

Perhaps most notable was his example of Mad Max sequel The Road Warrior which was instrumental in inspiring the use of a dog companion in Fable II. "[T]he bond between this dog was fantastic and after watching that movie we had the idea: that's the answer. This is how we're going to tell a story people remember, to give them something to care about."

He proceeded to take a quick poll from those in the audience who had finished the game on how many had chosen the ending that resurrected the hero's dog and family at the expense of thousands of other human lives. Seeing the overwhelmingly positive show of hands from the crowd he concluded "I think the dog really, really worked."

He even cited the "ground-breaking" PlayStation 2 game Ico as an inspiration. "It . . . had this wonderful mechanic in there for touch with which the main character could reach out and touch this girl," he said referring to princess that had to be led through an obstacle-laden castle. This became the direct inspiration for the context-sensitive touch mechanic in Fable III.

Over the course of the session Molyneux appeared very humble about the past occasions he had "over-promised" in certain areas of his games. He cited his infamous promotion of the original Fable as the "the greatest role-playing game of all time" and how the press and the public had "rightly" called this out as "bullshit." All-in-all, he was very down to earth when talking about his past projects and even brushed off the audience applause received at the mention of Dungeon Keeper: "it's okay . . . we promised a lot but didn't quite deliver on everything but there you go."

He ended the presentation by announcing Fable III: Kingmaker, an app for smart phones he compared to Foursquare. With it players can accumulate gold that can be carried over for use in the main Fable III game. Kingmaker is currently planned for launch in the UK, France, Germany, Spain, Italy, the Netherlands and Sweden for Android, Nokia Symbian, iPhone and Windows Phone 7 devices this week.

I'll let the man himself tell you more about it with this footage taken from the conclusion of the presentation.