Enslaved: Odyssey to the West on Game and Player 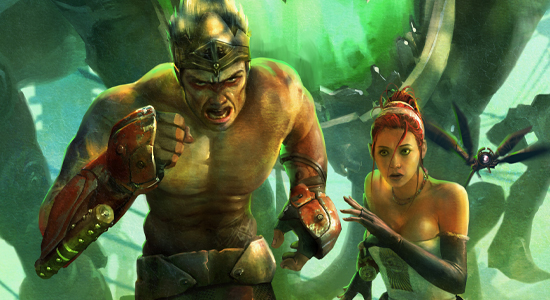 Enslaved: Odyssey to the West

Long on style, short on substance.

nslaved: Odyssey to the West is of those games you really want to love. It's quite easy to get swept up in the game's excellent artistic design, engaging storytelling, and vivid world. But underneath this glossy, cinematic sheen lies middling game play, numerous technical issues and a lack of substance.

Loosely inspired by the classic 16th-century Chinese novel Journey to the West, Enslaved is set in a post-apocalyptic future where mechs constantly stalk the remnants of humanity. The player is placed in the shoes of Monkey, a brutish loner who barely escapes an exploding slave ship in the beginning of the game. Using the technology of the slavers, a young woman named Trip manages to enslave him in order to help her find her way home.

It's positioned as a cinematic adventure and in this respect the game certainly excels.

It was co-written by Alex Garland, famous for having written the screenplays for movies 28 Days Later and Sunshine. Andy Serkis — best known for his role as Gollum in the Lord of the Rings film trilogy — and Lindsay Shaw do an exceptional job of bringing Monkey and Trip to life, both through pitch-perfect voice acting and some excellent use of motion capture.

The game presents perhaps the nicest looking post-apocalyptic future ever imagined. In stark contrast to the earthy tones of the Fallout series, Enslaved's world is full of vivid color. Even the swamp and junkyard regions are full of vibrant purples and greens.

Don't always leave 'em wanting more: the story's main problem is that there just isn't enough of it.

Despite the technical wizardry and engaging character performances, the story itself didn't quite draw me in. I think its main problem is that there just isn't enough of it.

For one thing the game is short by action adventure standards, clocking in at about seven hours. And despite a good underlying story, Enslaved's plot is pretty modest throughout with only three prominent characters in the narrative. Though we get to know Trip quite well by the end, we find out next to nothing about Monkey or even about the world itself.

But perhaps I've just been spoiled by the indulgent cutscenes of Metal Gear Solid 4 or the dense character arcs of Mass Effect 2.

The game's bo-staff combat isn't as responsive or exciting as its visual flair. It's pretty basic for an action game, and the few types of enemies you'll encounter are really simple to defeat.

The most challenging foe in the Enslaved is the game's camera, particularly during combat. When the player is attacking it seems to pull in unnecessarily close to Monkey, a move probably implemented to make the battles look more dramatic. However, when engaged with multiple foes this narrow view makes it hard to tell where other enemies are, making it hard to tell when and where the next attack is coming in.

The game's climbing gameplay is extremely simple, requiring little else than pushing in the right direction and jumping to have Monkey progress. Though this is extremely similar to the game play of the Uncharted series, it has been unfavorably compared to that of 2008's divisive Prince of Persia reboot. There, falling to your death was impossible thanks to the help of a magical female sidekick, something that many argued took away the game's challenge. Enslaved takes this a step further as Monkey will simply refuse to make any suicidal leaps or falls. Aside from a couple of late-game timing sections he is ultimately invulnerable when climbing, making these sections a complete walk in the park.

Bo-staff combat is pretty basic for an action game.When you're not climbing or fighting, you're probably going to be working with Trip to cross a particular area. She has to be protected at all costs, since if she dies the slave band keeping you under her control will also terminate your own life.

She isn't completely useless, though, as various gadgets allow her to project a hologram to provide diversions; and fire an EMP burst that can prevent foes from getting too close to her. In another nod to Uncharted, Monkey can boost her up walls and thrown her across gaps which helps create some interesting two-person puzzles.

Unfortunately, Enslaved has a number of technical issues that, whilst small, build up enough to impact the experience.

The game could've used a few more weeks of optimization too. I found screen tearing, frame-rate drops and texture pop-in (symptoms native to the Unreal engine which the game uses) throughout the game, both during game play and cutscenes.

Enslaved is also fairly buggy. I've heard multiple reports of characters models getting caught in geometry and or doing strange things. Personally I experienced two major bugs that prevented me from progressing unless I killed myself or loaded the last checkpoint. From what I've heard and played of it, the PlayStation 3 version of the game suffers less from these problems. If boosting your gamer score isn't a priority that one sounds like the version to get.

Enslaved: Odyssey to the West is one of those ideal rental titles. It's perfectly enjoyable for the evening or two it takes to complete. But there isn't much here to inspire a second playthrough, especially not right away. As such, I can't help feel like that the majority of full-price purchasers will come away from this one disappointed.

Enslaved: Odyssey to the West