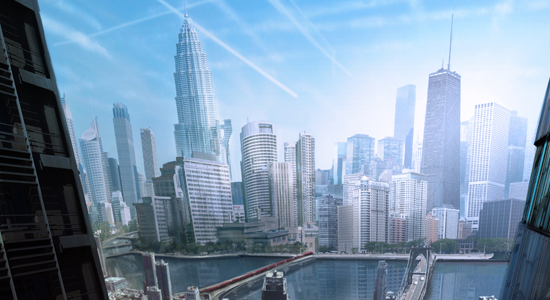 Well worth its assured hours and hours.

hough perhaps not with the same majesty, Focus Home Interactive commands, as Jehovah to Haggai, that we build. Following this spring's demise of developer Monte Cristo, Focus obtained the license to the 2009 urban simulator Cities XL, and has released a sequel. Streamlined to single-player but braced with new features and improvements, Cities XL 2011 offers players — both familiar and unacquainted with the original — their very own shop-class metropolis.

Picking among dots marked across the surface of a blue-green planet, players begin with their choice of a settlement's location from a variety of biomes, both categorical (plains, mountains) and actual (Hollywood, Krakatoa). Difficulty comes from habitability, arable lushness, mineral richness, and topography — helpfully summarized on a decadal scale to 100. Want to sit back and expand with the license of rolling plains? Or nose buildings, bridges and roads around the severity of ridges and valleys? One now, the other later — and a player can always revisit each.

Lessons are better learned during play. A personified tutorial, intended to guide novices, shows twin signs of age and amateurism. An insouciant mayor and his jaded assistant spar as they take a player through the paces; trying to appreciate the humor, I nevertheless found the exchanges off-topic and mirthless.

All I needed — and all I imagine others should require — were the game's notifications for unlocked zones and construction tools, popping onto the screen at each demographic and financial benchmark. The rest I picked up from trial and error. Here, Monte Cristo's terrific work and Focus' integration of it succeeds: Cities is simply intuitive, accurately reducing municipal growth to a kind of chicken-and-egg contention. Settlements need people. People need work. Work earns pay, and pay affords retail purchases. Upward mobility takes hold, and the backwoods begins its transformation to central business district.

Avoiding the famously jagged and often frustrating play curve in Maxis' landmark Sim City and other titles in the genre, Cities protects players from their own ambition or ignorance by limiting available zoning to the residents, industries, and commercial entities pertinent to the size and composition of a city. Furthermore, the act of building itself is aided by Focus' highly automated user interface — planting blocks of empty lots between even the most irregular frames of roads and natural obstacles takes very little effort. Situating bridges, however, to which players of the original can attest, is still a pain in the associate's degree in urban studies and planning.

Urban beauty's easy: planting blocks between roads and natural obstacles takes very little effort.Similarly, Cities does succumb to foibles ineradicable from the genre. Residents lack appreciation for practical convenience, so traffic congestion not only emerges early but, particularly according to players who have tried, is resistant to sensible remedies. I simply ignored it and built commonsense rectilinear blocks. Market sectors occasionally jump erratically, and for no apparent reason — but usually right themselves quickly, allowing players to identify legitimate weaknesses.

But elsewhere, good and hard work pays off. New to the mix are superficial additions such as roads and buildings, modeled after Continental and other foreign examples; and twists on transportation (subways), planning (blueprints), finances (taxation of demographics as well as every industry), and intercity commerce (trading natural and human resources).

Too little for those with the first game? Even if Focus weren't confident in its refinements, the developer has made the game's downloadable version available to original owners at a half-price discount. Otherwise, Cities XL 2011 is well worth its assured hours and hours.