Halo: Reach on Game and Player 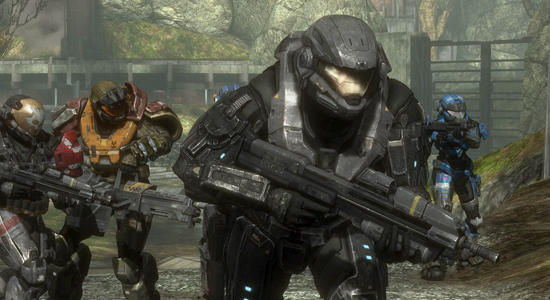 Bungie's parting love letter will be remembered for its multiplayer.

alo: Reach's campaign serves as a prequel to the Halo trilogy, building on the series lore established all the way back with 2001's Halo: Combat Evolved. However, its story shouldn't be confused with that of the canonical The Fall of Reach, the prequel novel by Eric Nylund also released in that same year.

While the book served as an origin story of Master Chief, the Spartan Project and many other important elements of the franchise's lore, Halo: Reach's plot is ultimately a side story to it. While there are a few moments where the two cross over, the game primarily focuses on Noble Team, an original group of Spartan III troops stationed on the titular planet as the Covenant launches its unstoppable assault.

Bungie was trying to create a more personal tale here, focusing in on one group's struggle against the inevitable downfall of the planet. But despite its best efforts Reach didn't really pull at my heartstrings. I think the main problem here is its brevity. A seven-hour campaign feels about right in terms of the gameplay, but this simply isn't enough time to flesh out Noble Team enough for us to care about their fate.

Fight the good ol' fight: not so welcome in the campaign is the repetitive level design.

The plot itself is pretty meandering for the most part. Only in the last hour or so are Noble Team recruited for a task that is somewhat meaningful to the events of Combat Evolved and The Fall of Reach, though even this comes off as underwhelming. The majority of the campaign sees our Spartans being bossed from mission to mission by unseen higher-ups. Though these tasks range from restabilizing Reach's defences and defending fleeing ships, they primarily comprise of killing a lot of aliens and occasionally pushing a button or two.

In other words, it's the classic Halo experience save for a few additions here and there. The wide, dynamic battlefields the series is known for return after being absent in Halo 3: ODST. New armor abilities like the jetpack, hologram and armor-lock add a new tactical dimension to how you tackle ground skirmishes. There are also a few new weapons like the grenade-spewing Covenant Plasma Launcher and the air strike-launching Target Locator.

Bungie does spice things up a little due to a greater emphasis on airborne combat. There are more than a handful of sections in the new Falcon helicopter, where players partake in air-to-ground engagements and air-to-air dogfights.

Along similar lines is the space combat set piece. In a first for the series, players blast off in Saber class fighters and take the fight to the Covenant in orbit of Reach. With a similar feel to that of Crimson Skies game this section handles surprisingly well. It's just a shame that this game play is consigned to just one brief section of play and not adapted for multiplayer outside of campaign co-op.

The best of what they do best: Bungie looks to have thrown in all but the kitchen sink into Reach's multiplayer.Not so welcome in the campaign is the repetitive level design. I was surprised by just how many areas are identical to multiplayer and Firefight maps — a strangely lazy move on Bungie's part. Aside from ODST's Firefight mode, this is the first time that a Halo game's multiplayer maps have taken directly taken from its campaign (or vice-versa depending on Bungie's design process). Perhaps this was a timesaving decision for the developer, but it's one of several examples of Reach not quite being all it could be.

Building on the interchangeable armor sets from Halo 3, in Reach your character's appearance is now persistent across every mode of the game. Tying into the new reward system, you're constantly earning credits to go towards purchasing additional parts for your armor. These pieces may be cosmetic but they provide both bragging rights online and another hook to keep players coming continually coming back to the game.

In addition to all the game types and the adjustable options from Halo 3, ODST's Firefight mode has also made the leap across. Essentially Halo's answer to Gears of War's Horde mode, Firefight pits a squad of four players against wave upon wave of Covenant forces with the goal of staying alive as long as possible whilst attempting to rack up a high score. Though the short, single-set versions of it currently running in matchmaking don't play to its strength as an endurance run, Firefight's greatly expanded options mean you can now experience it however you choose to in custom games.

Pulling ahead in a tight race? Digging deeper into Reach reveals an astounding amount tweaks and improvements.Another returning element from Halo 3 is Forge mode, which has now become a fully fledged map-maker. Using a huge blank canvas arena called Forge World, players now have much more powerful tools at their disposal. Precision placement and rotation, the ability to phase and connect objects together and a catalogue of structural pieces results in a robust creation tool unlike anything seen before on consoles.

Though making maps still requires time and dedication, Forge has a staggering potential for boosting Reach's multiplayer legs. Even if you're not one for putting them together yourself you're bound to reap the rewards of Forge content once Bungie begins incorporating player creations into matchmaking.

Digging deeper into Reach reveals an astounding amount tweaks and improvements — an expanded matchmaking veto system, the ability to again play as a female Spartan, the new search engine for player-made content, daily and weekly challenges for bonus credits, improved Bungie.net coverage and a big graphical bump are some of the more obvious ones.

But Bungie is also implementing several behind-the-scenes initiatives. In a bid to foster a friendlier online experience, consistent quitters and regularly muted players will find themselves with temporary bans from matchmaking and using voice chat.

Reach, Bungie's last Halo game, will ultimately be remembered most for its multiplayer refinements. As the developer's parting love letter to the series, it's understandable that it didn't make any dramatic design decisions here. But as a result, this fifth FPS in the series is lacking the cutting edge that helped make the originals such a phenomenon. In the highly competitive and crowded sphere of modern FPS, some may find this somewhat underwhelming.

I haven't had as much fun with Halo since the prime of Halo 2 multiplayer.

I haven't found the campaign particularly stale. While perhaps not as memorable as CE, it's head and shoulders above 3 and ODST.

Multiplayer is the best offering of the series yet -- with the throw-back maps being an absolute blast to play.

Looking forward to an aerial combat patch-in game mode in the future!

To my point about the reuse of levels across the campaign, Firefight and multiplayer - I probably should have mentioned that the remake of Halo 2's Ivory Tower was worked into the campaign. That was the moment when this whole design ethos really hit me.

@Jeremy In terms of innovation, Halo 3 was where the diminishing returns began for the series but I think the campaign ultimately went out on a high there.

What do you know about this aerial combat patch? I haven't heard anything on this.

Haven't heard anything about a patch, actually.

It just wouldn't surprise me if Bungie was able to patch-in such a mode in a future playlist update.